Hippies at the gate: why the Left and Right hate coal seam gas

There are few issues that bring together the activist Left and the rural Right. But coal seam gas has Nimbin hippies protesting next to knitting nanas, writes Crikey intern Michelle Slater. 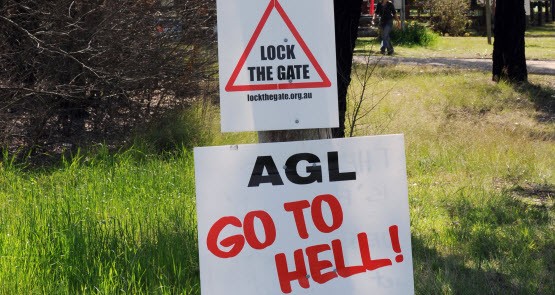 Opposition to coal seam gas projects is uniting the rural Right and the urban Left.

Law lecturer Aidan Ricketts, who wrote The Activist’s Handbook and established a university-accredited activist training program, calls the anti-CSG movement the most important social movement in modern Australian history. He says one of the unique aspects of the anti-CSG movement is the mixture of conservative landholders and liberal activists taking direct action at blockade sites across Australia.

“It cuts right across political and cultural boundaries. You have people at protests who will vote LNP [Liberal National Party],” he told Crikey.

“You look at Bob Katter’s party. They are against the Woolies and Coles duopolies and World Trade Organisation deals. These are also Greens policies. What usually divides these parties are trees, immigration and gay marriage. So now it’s moved beyond that to shared issues like water and survival for the agricultural sector and integrity for rural communities.”

He says there are instances of long-term members of the Nationals “turning their backs on the party” over the issue.

National candidate for Page Kevin Hogan has pledged to oppose any attempts to water down CSG regulations and supports suspending the industry. He told The Northern Star: “I would cross the floor of Parliament on this issue if necessary.”

Annie Kia from grassroots group Lock The Gate says that in a survey of over 80 communities in the NSW Northern Rivers area, 95.5% of respondents opposed CSG. The Gasfield Free campaign has been taken up across regions such as Gippsland, the Liverpool Plains and parts of the Hunter and Sydney’s water catchments with similar results.

“In National Party strongholds such as Goolmangar [in Northern NSW], farmers have embraced the initiative with passion, as have residents of alternative-lifestyle communities such as Nimbin,” she said.

Kia says anti-CSG protesters are an extraordinarily broad group that encompasses people from diverse back grounds.

“At a blockade, a TV camera may focus on a person with dreadlocks in a crowd of 350 people,” said Kia. “They are just one part of the social movement.”

This media focus detracts from groups such as Knitting Nannas Against Gas, a group of senior citizens “who take their folding chairs and Thermoses” outside the office of Lismore MP Thomas George every Thursday, she says.

Lindy Moss, 57, who has traditionally voted conservatively, says she was “proud to stand by any hippies” at a CSG blockade in the small community of Glenugie, near Grafton, NSW, last January. “I’m not an activist. I’ve never been an activist. This is an issue that grabs people from all walks of life,” she said.

Moss, whose husband is a surgeon at the Grafton hospital, farms beef and tea tree oil on their 219-hectare property, which is within five kilometres of a Metgasco drill site in Glenugie. She became concerned about the issue when she learned about the industry’s effects on water. “When this drill was put in at Glenugie, we heard about it and I felt it was wrong.  My husband feels the same way,” she said.

Moss joined a blockade of the site that began with local landholders but grew to over 150 protesters from beyond the Northern Rivers. It lasted nearly eight weeks until police broke it up.

“Some people were dumbstruck, saying, ‘I’ve never done this before’. But somebody from Lock The Gate gave us an instruction day about peaceful non-violent direct-action,” Moss said. “We learned our legal rights to obstruct the road until the police told us to move on. I didn’t want to get arrested.”

Long-term activist Benny Zable from the Nimbin Environment Centre was at the Glenugie action. “There’s an interaction going on between the farmers and old-time hippie element,” he said. “When people gather about an issue there is a common bond between people about taking care of the country.”

Moss says that it is still early days for the CSG movement. “Farming communities aren’t quick acting or radical. Life’s busy from dawn to dusk,” she said. “More farmers will see this coming to their doorstep and have no choice but to get active.

“I think this social movement will get bigger.”

Behind the Seams: the science behind CSG’s clean credentials

Now that’s the real issue right there. What did she ‘learn’, and from who? Any chance of an examination of whether fears sparked by drilling are justified?

Sorry, should have read the subsequent story before posting my questions. To answer them, you need a science journalist.

NSW Taxpayers in the majority giving instruction to their elected representatives are top of the hill, when it comes to what is to be permitted on our resources. Do not accept any other spin! Here is something for free thinking Crikey readers to consider.
Barry O’Farrell, Chris Hartcher and our Federal government are scamming us. We the peoples do not want Coal Seam Gas mining, fracking, because of the perceived risk of chemical contamination to our safe ground water supplies. Governments telling us there is oversight of those permits Labor has issued and if there is a problem government will be all over it. Is rubbish tell us miners have bought an insurance police in the tens of billions of dollars I may be convinced in my dreams … I do not believe it is possible to fix destroyed aquifers and poisoned ground water after the damage has been permitted by malfeasant government at state and federal levels. These are natural resources which farmers and home owners rely on to feed themselves and produce crops for australia as a nation. I already know Chris Hartcher has let us down because I listened to him attracting voter support around the Cessnock, Wyong and Hunter regions. Telling anyone who would listen how if elected into State government he would work to protect the wine industry, primary producers and horse studs. You should resign Hartcher!
Here are some parts quoted of easy to access information lifted from DOMGAS Alliance report dated 2002 Please hit the links and consider for yourself; At a time when manufacturing is facing significant challenges, competitively priced energy is one of the few advantages Australia has to offer and which government can help deliver. This advantage is being lost overseas as major gas producers focus on maximising LNG exports to China, Japan and Korea. Gas prices have risen sharply from $2.50 per gigajoule in Western Australia to $8/GJ, and from $3-4/GJ to $6/GJ in the East Coast. Australia is the only country that allows international oil companies to access and export natural gas without prioritising local supply. It is also the only gas exporting country experiencing serious gas shortages and sharply rising gas prices. In the United States, domestic gas prices have fallen in recent years from $14/GJ to as low as $2.50/GJ (Henry Hub). To secure this advantage, the US Government has conditioned approval of new LNG exports from the Sabine Pass on gas producers prioritising the local economy and ensuring affordable prices. We are being run into a fiscal ditch by the very same people at Federal and state levels of government whom we have given our votes to in trust. My source information dated 2002 http://www.domgas.com.au/pdf/A…
Edward James

Hang on I had read the MICHELLE SLATER by line! and posted a comment which is moderated Thank uck it is not friday WTF

Surely the other point that could be made is the about face from a couple of centuries of denigrating native peoples concern for their land being raped by white invaders?
Take mining in this country – no probs when it’s not under white fella sacred sites, like Collins or Pitt Sts.
Now that concern even extends to St Peters, not the most salubrious or desirable Sydney address, but whites don’t want CSG or fracking there.