Why we should be cheering on the US Federal Reserve

With momentum against further quantitative easing building, the dollar's long run above parity might finally be near an end, with some nudging. 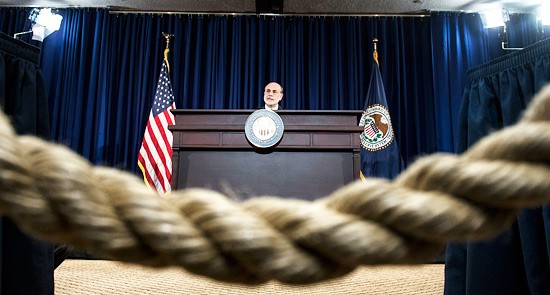 The March 19-20 meeting of the Federal Reserve could very well redefine the international economy for 2013 and 2014, start easing the strain on the federal budget in Australia, and hand the new government after September 14 a much easier playing field to negotiate than the current one dominated by the strong dollar.

If we listen to the pet shop galahs in the Australian media and economic commentariat, then Australia will be crushed by the easy money spilling from the spending regimes of the world’s major central banks, especially the Bank of Japan. But as Crikey reported yesterday, the outlook is changing for these bouts of quantitative easing from the US Fed, the European Central Bank, the Bank of Japan and the Bank of England. There’s now doubt that the Fed will continue its $US85 billion of purchases each month into 2014, and the key policymaking committee of the Bank of England stood up and rejected an attempt by departing governor Mervyn King and two others to push through an increase in its spending.

And yesterday, the Japanese government made a major change in its spending program that has gone unnoticed here. Instead of getting the Bank of Japan to buy foreign sovereign bonds as well as Japanese government debt in its stepped-up easing program, the central bank will stay at home. Tokyo reports say that Prime Minister Shinzo Abe has changed his mind after losing out to Finance Minister Taro Aso in a battle over the hair-brained idea that threatened to be a major destabilising move internationally.

That now puts Japan in tune with the rest of the Group of 20 major economies, which had been concerned about the impact of this controversial idea. At the weekend the G20 agreed not to “target our exchange rates for competitive purposes”. That was seen as discouraging the buying of foreign bonds by Japan and other countries trying to ease the impact of any move from Japan. The G20 statement had followed objections from some countries to new Japanese economic policies, which have fuelled the yen’s sharp fall since last November.

So unlike the galahs, a limit to more central bank easing seems to be emerging. In fact, the moves appear to have taken Australian government officials and others by surprise, especially the news of a split in the US Fed. That brought rebound stockmarkets up short (underlining how much of the buying pressure has been based on the cheap money from central banks). After an upbeat assessment of the Australian economy this morning from Reserve Bank governor Glenn Stevens, the market galahs regained their nerve and pushed the Aussie dollar up to $US1.29, regardless of the fact that what he said differed little from the minutes of this month’s board meeting and the latest Statement of Monetary Policy.

It’s a good thing for Australia and other countries (such as New Zealand, Canada and Sweden) that there are now clear doubts about the wisdom of the Federal Reserve continuing to spend $US85 billion dollar a month on greasing the wheels of a US economic recovery and underwriting with cheap money a rally on stock and credit markets. It’s not the threat from higher inflation; US consumer inflation is running less than 2% at the moment and so are wholesale prices. It’s the threat to market stability, interest rates and the Fed’s own reputation that are starting to concern people at the US central bank.

And it’s especially the fear that the Fed’s huge balance sheets (over $US3 trillion and rising) could end up harming the US economy and confidence if the current easing continues too long and runs into an expansion that is growing by the week. That could unsettle markets, force interest rates higher than they should be, or cause rates to rise too quickly, choking off the recovery and boosting unemployment just as it should be on the way down.

If the Fed gets the unwinding of its balance sheet wrong, or if markets panic at an unexplained change in the size and nature of its huge balance sheet, there could be a sudden spike in interest rates as bonds are sold off. There are hundreds of trillions of dollars tied up in all sorts of bonds around the world, from US treasuries to triple-A corporate and the junkiest of junk bonds. A rise in rates that is gradual won’t cause too much pain, but a sharp spike from a mis-timed bond sale or unexplained change in the Fed’s balance sheet could knock markets sideways and cause big losses in the US and the rest of the world. So it’s no wonder some key members of the Fed are getting nervy.

Barring an Italian-led eurozone crisis after this weekend’s elections (two days to hold a poll in a country much smaller than Australia or the US!) the Fed decision in March will be the major economic influence for Australia, especially in the run up to the September 14 poll and the 2013-14 budget. It will influence the value of the Aussie dollar, which continues to suppress demand in key parts ofthe economy, or redirect it offshore. Already we have seen the hint of a move by the Fed to end the easy money game drop the value of the Aussie dollar by 1.2 US cents in a matter of minutes in the early hours of Thursday morning.

It could soon be time for a pointed remark from the RBA about the currency, rates, or the outlook from the RBA, or perhaps a rate cut. This morning’s appearance by Stevens before the House of Reps economics committee was too soon. An interest rate cut that comes out of the blue could be the trigger for a significant fall in the dollar. The markets had expected a rate cut next month, but that would have to happen before the Fed meeting in mid-March, so an April one might be better timed, especially if the Fed decides to haul in the spending and looks to start a campaign of slow rate increases.

Any move down in the dollar will be welcome here by business and help ease the pressure on budgets (corporate and government) and provide the new government after September 14 with a bonus that wasn’t around a week ago.

Eh? What’s this ‘could’ white man?