Fairfax: size does matter. The Sydney Morning Herald and The Age have unleashed a PR blitz ahead of the launch of compact — not tabloid, as editorial director Garry Linnell stresses — editions on March 4. Readers are walked through the changes at new websites Know No Boundaries (for the SMH) and Forever Curious (The Age). Here’s what the papers will look like:

Fairfax engaged brain-imaging firm Neuro Insight to test the new designs. According to Fairfax, eye tracking testing showed a 22% increase in reader engagement compared to the broadsheet and a remarkable 50% increase in visual attention to advertising. A new website design is also on the way for the highly-read Age/SMH websites. It’s cleaner, with more white space and less links.

The metro editors-in-chief — Sean Aylmer at The SMH and The Age‘s Andrew Holden — have also started blogs to give insiders a glimpse inside the newsroom. Aylmer explains: “The world is full of spin. People are paid to twist the truth. My job, every day, is to look beyond what’s obvious and beyond the noise and discover stuff that no-one else knows.” Says Holden: “We are eternal children, the ones that drive you mad with their constant questioning. There just aren’t enough answers in the world to satisfy someone who really is Forever Curious. And what makes us happy is that our readers are just like us.” — Matthew Knott

The Oz and its greenhouse grassy knoll. In today’s Australian, Graham Lloyd has a story that claims that the head of the IPCC, Rajendra Pachauri, “has acknowledged a 17-year pause in global temperature rises”. The inference throughout Lloyd’s story is that the slowdown in the rate of warming has been brushed under the carpet in some way and has only recently been admitted by scientific bodies. Worse still in Lloyd’s eyes is the fact the Australian media has refused to cover it. As he says:

“Unlike in Britain, there has been little publicity in Australia given to recent acknowledgement by peak climate-science bodies in Britain and the US of what has been a 17-year pause in global warming. Britain’s Met Office has revised down its forecast for a global temperature rise, predicting no further increase to 2017, which would extend the pause to 21 years.”

I am no climatic scientist, so I am in no position to judge the depth of the conspiracy. However, what is peculiar about Lloyd’s revelation is that it has been discussed in the literature for several years. The four scientific bodies that maintain extended records on global surface temperatures — the NASA Goddard Institute for Space Sciences (GISS), Met Office Hadley Centre, US National Ocean and Atmospheric Administration and the Japanese Meteorological Agency — also publish regular updates and their data are freely available on the web. NASA even publishes a handy graph that overlays the data from the four sources. All of these data show the slow down in the rate of warming, and have done for years. And, if that wasn’t enough, the Goddard Institute publishes semi-regular explanatory pieces for a non-technical audience on the drivers of short-term trends.

The last of these was released in January 2012. Consistent with other studies, it suggests that the slowdown in the rate of warming is primarily due to two natural factors: the El Niño cycle (the La Niña events of the past five years have cooled the Pacific and, in doing so, lowered the global mean) and the solar cycle (we have been in the midst of a protracted solar irradiance minimum since the mid-2000s). An increase in sulphur emissions due to fossil-fuel intensive growth in developing countries, particularly China and India, may also be offsetting the warming associated with increased atmospheric greenhouse gas concentrations (aerosols reflect incoming solar radiation, thereby cooling the Earth). However, at present, there is a lack of solid data on the magnitude of this effect.

In short, the slow down in the rate of warming is nothing new, it has not been ignored by the scientific community, it is consistent with the current scientific understanding of the climate system and it does not provide any basis for doubting the warming effects of greenhouse gas emissions or the risks associated with climate change. — Andrew Macintosh (Associate Director of the ANU Centre for Climate Law & Policy)

Photoshop effort of the week. The Daily Telegraph‘s photoshop geniuses just keep on keeping on. Here was the pic that accompanied The Tele‘s story on the Greens/Labor split earlier this week: 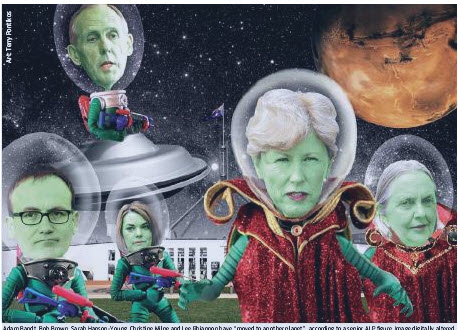 Video of the day. Kevin Rudd’s attempt at a chin-up proves about as successful as his most recent attempt to win back the Labor leadership. 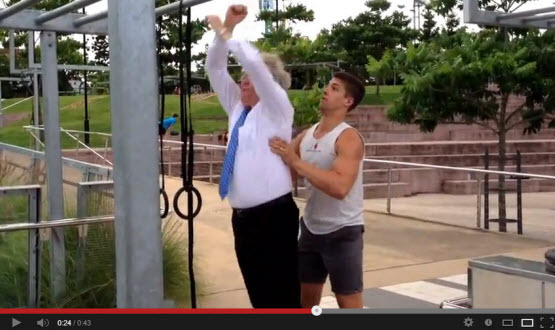 Presumably Graham Lloyd and his editor are “climate scientists” – having chosen to boost/publicise, to greater public consumption prominence, those parts which they have?

… and what a pity no one has the “resources” at their disposal of the Tele-tubbies, to ridicule “them at work”, playing with themselves and their PCPs?

After years of seeing Kevin doing lame “camera stunts”, I was far too savvy to click on his latest effort.
Alas, I was “ambushed” by that abominable Fairfax “Know no boundaries” promo and am now contemplating plucking out my eyeballs to ease the pain.

I thank Andrew Macintosh for his quick and readily understandable analysis of the latest from the Australian’s Graham Lloyd. I assumed it was rubbish, but it is good to have this confirmed and understand why.

Once again Graham Llyod at Limited News misrepresents the climate science. The British Met Office published a report stating that their projections for the next 5 years for atmospheric warming is 20% less than the previous forecast. Note that the MET office is still predicting a warming trend that is only at a 20% lower level but somehow Lloyd turns this into no warming. Llyod conveniently misses certain facts such as NASA stating that 2010 was the hottest year for land and ocean temperatures followd by 2005 and 2002.
The Brit Met office has 1998 as their hottest year for the lower atmosphere. A major crticism of the British Met Office has been that their global sensors cover only 85% of the worlds land and ocean areas and they miss out on the Artic region where significant warming is taking place. The Americans through NASA and NOAA have about 100% coverage so their analysis is better. The Japanese Met Office agrees with the Americans.
Llyod is notorious for giving only part of the picture and he does so to deliberately misinform.