Crikey says: why Julia Gillard has to go/stay

Who needs a narrative anyway? Not Labor, argues Bernard Keane. We point out what Marcia Langton thinks she doesn't need to. Which MPs are visiting Asia in its century? Exploring South Africa's violent psyche. And the filmmaker's dilemma: poverty or obscurity.

The week in politics: Julia Gillard’s fate hangs in the balance. Let’s cross to our expert commentators …

The Age‘s Mark Baker kicked it off Wednesday with a pungent piece calling on Gillard to go:

“It’s time, Labor. Time to end the delusion that Julia Gillard and her battle-scarred camp followers have any chance of political resurrection. Kevin Rudd might well be a very naughty boy, but Labor has no choice but to test whether he still has the makings of a messiah. It is the only card this discredited, demoralised and dysfunctional government has left to play.”

“Julia Gillard, it is time for you to make your graceful, dignified, humble, selfless exit from the prime ministership. Stay and it’s harder for those who love you to save the furniture and protect your legacy. Stay and you will hurt more. Forget Kevin Rudd and Tony Abbott. This is about you. Forget the loss of face. Life’s too short …

“Admitting the dream is over is painful. Maybe you have known all along. Maybe you did not want to let your supporters down. Maybe you owe it to your family. Maybe to your father. Now, you know about grieving. How at first you deny it’s happened and grasp every skerrick of how things were.”

“Julia Gillard should stay where she is. The Labor Party has run out of party tricks. The federal government’s perceived unpopularity is a collective effort, an effort that began with Kevin Rudd, who as prime minister was so dysfunctional in his leadership and his megalomania that his own colleagues revolted against him.”

Feminist academic Eva Cox also called for her to carry on; so did Labor historian Nick Dyrenfurth. But in a piece titled “PM should go for party’s sake”, Graham Richardson argues today:

“A loss of between of between 30 and 40 seats is on the cards, a slaughter of epic proportions. It would take Labor a decade to recover from that and given how much worse the situation is in NSW and Queensland, large chunks of the talent pool would go as well.”

Did we learn anything new? Almost certainly not. But for all the complaints readers have had a gutful of leadership chatter, the tale of the (Fairfax) tape tells a different story: 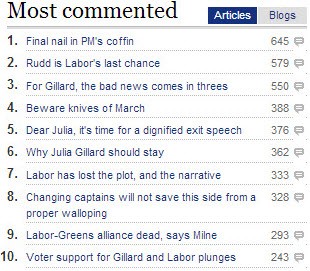 You’re all mad. Join us for more next week, sports fans.

CORRECTION: The original version of this article stated Alan Stokes wrote his SMH piece on Thursday; he in fact wrote it for the website on Wednesday.

“Dissertations on the Right Stuff” by A. Journailist?
OMC – How bizzare.

Hmm, but if Richo’s ‘talent pool’ is a scum-filled inbred pond of bottom-feeders, what’s the loss?

Unbelievable that Richo has the gall to even shows his face. The stink wafting out of NSW can be traced to him and his mates. The sordid dealings being revealed through ICAC, the lack of remorse, arrogance, lies and evasions on display by the main protagonists are doing far more damage to Labor than anything else.

The only reason Paul Sheehan want Julia Gillard to stay as PM is because the the coalition is sh+t scared of a Kevin Rudd return. Kevin could just win the “unwinnable” election – not the outcome Sheehan and his Ltd News colleagues require.

Gawd help me. It happens once or twice a decade, and it’s come around again. I agree with something Paul troll Sheehan has written.

Secondly, this malarkey, again aired by Richo,that a wipeout would take them 10 years to recover from, is just rubbish. The world has changed, things move faster now, dissatisfaction begins the moment you are crowned. Besides, the likelihood of Abbott’s government not being chaotic are pretty slim. They could just as soon find themselves burnt out in 18 months.

The world has moved on Richo, and pundits. What used to happen cannot be relied on as a gauge to the future any more.

And yes, Richo was in the debacles up to his neck.