Research and development perks. Tips has been nosing around on what big business used their outgoing R&D tax breaks for (Labor wants to strip back the perks to pay for its manufacturing policy). This from a mole:

“I used to work at that paragon of virtue, the Australian Wheat Board. Each year we did a little over a million bucks worth of quality testing so we could assess and report on the year’s crop to assist sales. It was pure quality assurance and would have happened regardless, but it was lab stuff and science-y so the good folks at the ATO gave it the big tick. I vaguely remember it getting a few more pointed questions towards the end though.”

From what we’ve heard, seems like those R&D perks were a bit of a rort, at least some of the time (think product development that would have happened anyway, and mandatory chemical trials). Know more? Drop us a line.

No Truth at this uni. Tips loves a good office email, almost as much as we love meaningless jargon-babble. So what a delight to find both in the same place. We’ve received this email, sent to all staff from the techhies NSW’s Macquarie University: 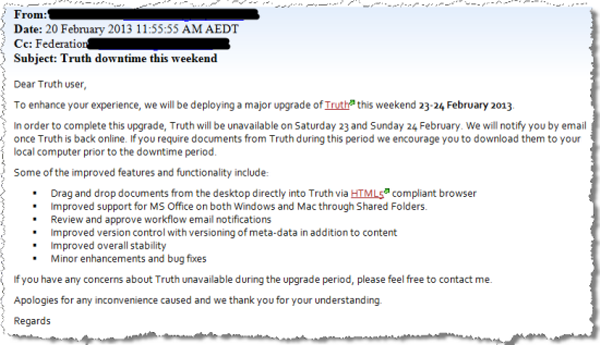 As our uni mole said:

“‘Truth’ is actually some sort of information repository at Macquarie Uni, but the wording of this email demonstrates the pitfalls of adopting hip meaningless names for organisational systems (note the groovy Trekkie terms like ‘Federation’ for the IT crowd. We also have things, I mean people, who sign themselves off as ‘product evangelists’ *sigh*).”

Digging into Abbott’s past … We’ve had a few tipsters interested in the story that ex-trainee priest Tony Abbott insisted on providing a character reference for a Catholic priest who was later struck off by the Vatican for “grave reasons”, following a child s-x abuse case. Abbott’s character assessment was used in court in 1997. Some readers are wondering why this issue has not received greater prominence in the media (who are too busy running photographs of Abbott and his daughters to give it much space). Certainly the priest issue has received a tiny, tiny fraction of the media’s hot pursuit of Gillard over those old unproven AWU claims.

… while we monitor the clan. The photograph of Abbott clasping hands with daughter Bridget has inspired Tips to maintain an Abbott Clan Watch on photographs of him with his daughters. There’s Louise, Frances, Bridget; we’ve seen them skylarking in the pool with dad, on the beach with dad, on the campaign trail with dad … you get the idea. It used to be Louise who got in most of the pics, but it seems that Bridget is giving her a run for her money of late. Crikey will keep a tally to see which daughter is getting the most media pics — and we need your help. Email through pics to Tips.

We’re not saying there’s anything wrong with a politician rolling their kids out for the media — but don’t blame the media and cry “privacy” if one of them does something wrong and they end up on the front page for all the wrong reasons. What do you think of Abbott’s use of his family in the media? Send us your thoughts.

If you’re going to be anywhere near the University of Tasmania tonight, don’t bother with Monckton, come to this for some real science instead:
Dr Jim Jago (Associate Professor, University of South Australia) on The Emu Bay Shale Lagerstätte, Kangaroo Island: Australia’s Burgess Shale deposit
hosted by the Geological Society of Australia Tas Division. 6 pm, School of Earth Sciences lecture theatre!