The currency wars: how the mighty A$ is quietly shaping politics

The strong A$ is the elephant in the room of Australian politics, although Wayne Swan is now paying more attention to the productivity challenge posed by the currency wars. What can he really do about the gold-plated dollar? 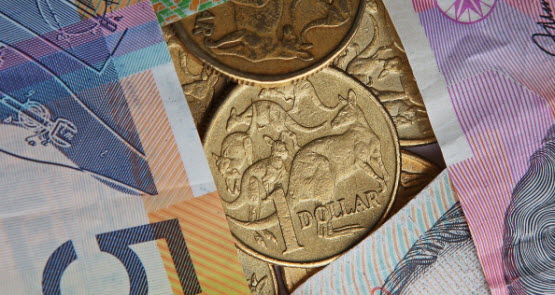 While the media obsesses about the Labor leadership and the election, the strength of the Australian dollar is a key unacknowledged factor currently shaping politics.

The dollar’s strength, and its stubborn refusal to respond to the factors that have traditionally seen it weaken, have been a persistent handbrake on corporate profits both in the mining and non-mining sectors, and as a result on tax revenue. That’s in turn led to Wayne Swan having to abandon the government’s commitment to surplus, even if it might come closer than many currently predict.

But it has also helped keep inflation low, which along with the government’s tight fiscal policy has given the Reserve Bank room to keep reducing interest rates in an effort to kickstart residential construction, an agenda that, if successful, should make economic management much easier for whoever wins on September 14.

And, more subtly, it’s sent a shock through the trade-exposed sector, particularly in manufacturing, that has forced lazy managers and unions to focus on cost-cutting and productivity. As a result, while every resident galah in the national newspapers has been talking about productivity as though it could be conjured up with a dash of WorkChoices, workers and bosses in the real world have been getting on with the challenge.

“The productivity challenge posed by the high dollar is one to which the government has come a little belatedly … but it is now front and centre.”

Perhaps that’s why manufacturing actually halted its decline in employment last year and put on 14,000 jobs after decades of decline.

The productivity challenge posed by the high dollar is one to which the government has come a little belatedly, at least in rhetorical terms, but it is now front and centre in Labor’s economic policy and the narrative for the remainder of its term. It provides a handy public spur for reform in an economy otherwise dominated by good news, in the same way Keating used the current account deficit and talk of a “banana republic” to focus Australians’ minds on the need for reform in the ’80s.

In dealing with the problem, this much-maligned government has declined to take advantage of the advice offered by various parties. It has rejected the suggestion from both unions and conservative commentators like Warwick McKibbin that direct currency intervention should be undertaken to lower the dollar, wisely understanding that such efforts would be extraordinarily costly and futile.

It has rejected the protectionist arguments of unions and the Greens that it should simply order large companies to use more Australian content. And it has rejected the galahs in the national papers and in business who think just cutting wages — sorry, “workplace flexibility” — can make up for a high dollar. Julia Gillard correctly nailed this furphy on Sunday when she noted that average wages would have to fall to $50,000 pa to offset the recent strength of the dollar.

The government’s new manufacturing policy is instead a mixture of red tape and some shuffling of incentives to encourage greater use of Australian content, without mandating it, and encourage genuine on-the-ground innovation. It’s a package that, unlike the other options urged on the government, is unlikely to cost much or do much harm while manufacturers get on with the challenge of improving productivity themselves.

This isn’t the only government to turn its thoughts to the impact of its currency. It was a major issue of consideration at the weekend’s G20 meeting, with the possibility of “currency wars” on the mind of major economies. The G20 declared in its communique that it “will refrain from competitive devaluation … [and] will not target our exchange rates for competitive purposes, will resist all forms of protectionism and keep our markets open”.

As an economy so dependent on trade, Australia is naturally concerned about the possibility of major economies starting to use their currencies to engineer greater export competitiveness. But as Fairfax’s Peter Martin noted, Wayne Swan was actually the lead currency wars sceptic at the meeting, suggesting falling currencies reflected not deliberate attempts to boost exports but the natural consequence of fiscally constrained economies relying heavily on loose monetary policy to stimulate flat economies — something no one concerned to see higher global growth should be concerned about.

Because Swan appended one sentence on the impact of austerity to his remarks, Joe Hockey, continuing his pattern of mixing up assurances that we’ll be in reasonably safe hands after September 14 with arrant nonsense, declared Swan’s views were evidence of what wastrels Labor were. Hockey either completely misread Swan’s remarks or didn’t care that almost the entire focus of the Treasurer’s remarks was “accommodative monetary policy”.

But Swan’s view was echoed by the head of the European Central Bank Mario Draghi, who said exchange rate movements were “the result of domestic macro economic policies meant to boost the economy.” WSJ blogger Simon Nixon took a similar view.

For a country with a manufacturing sector getting pummelled by a high currency, it’s a remarkably sanguine view, but it happens to be the correct one. Labor appears to have accepted that there are no easy ways to deal with a high currency, no short cuts; that the best approach is to drive innovation and let businesses pursue productivity. From that perspective, Swan can afford to be more relaxed about the currency than many of his counterparts offshore.

It also means that, if and when the dollar does soften, whether it’s next week or next decade, it’s a windfall for an economy that’s already doing the hard work of becoming more competitive.

thanks for your inciteful article my question is why dont truthful articles like this get published in the main stream press ? the answers simple they dont want to publish any article that might reflect any good on this labor government

thats a disgrace and imbiciles like hockey get quoted every day in and out bagging our economy,as a consequence of this misinformation and probably brain washing , most of the public beleive that our economy is in dire straits

simply the australian public is not being told the truth

the main stream mediac, murdoch dominated aided and abetted by the right wing rednecks has taken over the information stream in our country

Calls for protectionism come in all flavours, and the cries of the currency warriors is just another one. Capitalism must face adversity to evolve, and a stint with a high dollar will do much to rid us of unproductive enterprises and actually boost productivity.

I thought higher productivity was what everyone says they want? But is that only if it’s by screwing wages?

I wonder what the new Japanese finance minister had to say at the g2o? Since returning to government in December his government has vigorously attacked the value of the yen, bringing it down by around 10%. Positive results are already being felt – at least in terms of confidence.
It’s probable that a mere change of government at home will have a similar effect on the Au$, especially if Hockey goes a head with some of his more irrational plans (undoing the price on carbon is sure to cause some uncertainty and lead to a leaching of confidence in currency buying circles).
Matt.

What do you think BK of Peter Jonson’s suggestion (in his Henry Thornton blog) that there should be some sort of tax on short term foreign deposits in Australia? Maybe on bond purchases too, I forget. As he was once Chief Economist of the RBA that is surely worth thinking about and would have the advantage of bringing in some much needed revenue.

BTW don’t Hockey’s appearances on TV now give you some comfort and reassurance compared with what you might have thought a couple of years ago? He seems to be well briefed and realistic about the economy. What you cite in your article is just Hockey playing standard politics I guess and, all things considered right now I don’t see much down side for him in playing it like that.