No contest for today's Chunky Bits Daily Leadership Beat-Up Award. The ABC won hands down for hanging continuing speculation about a Kevin Rudd challenge on this bit of internet nonsense.

A quinella for the ABC. No contest for today’s Chunky Bits Daily Leadership Beat-Up Award. The ABC won hands down for hanging continuing speculation about a Kevin Rudd challenge on this bit of internet nonsense. 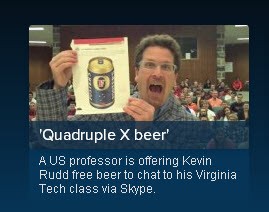 Yes. That story actually was the first item on the main evening bulletin on ABC television’s 24 hour news channel. And all because Kevin tweeted. 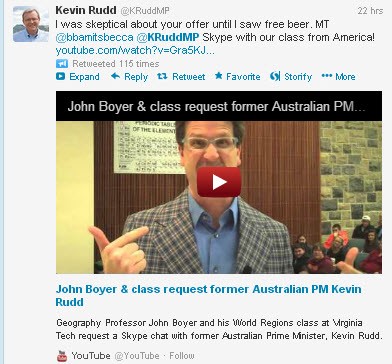 No doubt tonight the channel of political record will bring us this one: 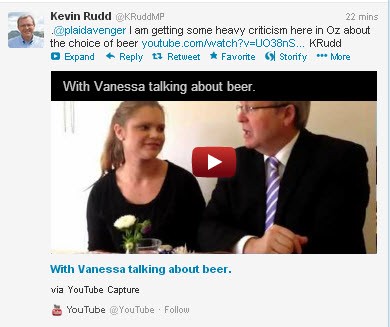 Not that the Ruddster and his beer was the ABC’s only entrant of merit. There was also this informative exchange between a Darwin newshound and Employment Minister Bill Shorten:

Reporter: If the Prime Minister’s leadership has become untenable have you spoken to anyone about the leadership?

Reporter: Have any of your supporters canvassed you as a possible option for the leadership?

Reporter: Have any of your colleagues come to you asking you to make a tilt for the leadership?

Reporter: Is it time for Julia Gillard to consider best interests of the party and step aside and have someone new?

Shorten: I know you have to ask those questions but I can’t take that question seriously.

A very worthy runner-up that completed an ABC quinella.

One serious paper. Good to see there is still one serious paper that is not after a win in our beat-up competition and keeps concentrating on stories that readers are actually interested in. 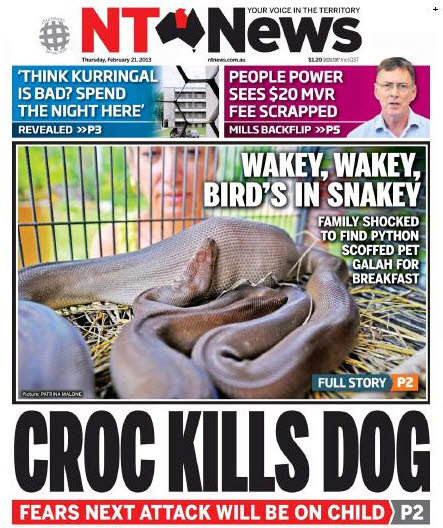 The pity is that I can’t get it home delivered.

China to follow Australian tax examples? From Xinhua, the official Chinese newsagency, comes a report that China is planning to introduce a tax on carbon dioxide emissions and a form of resources rent tax on coal that will replace revenue currently raised per tonne with a tax based on prices.

Jia Chen, head of the Ministry of Finance’s tax policy division, outlined the planned changes in an article published on the MOF’s website. China will proactively introduce a set of new taxation policies designed to preserve the environment, Jia Chen wrote, including a tax on carbon dioxide emissions, according to a senior official with the MOF. The government will collect the environmental protection tax instead of pollutant discharge fees, as well as levy a tax on carbon dioxide emissions.

“The government is also looking into the possibility of taxing energy-intensive products such as batteries, as well as luxury goods such as aircraft that are not used for public transportation, according to Jia.

“To conserve natural resources, the government will push forward resource tax reforms by taxing coal based on prices instead of sales volume, as well as raising coal taxes. A resource tax will also be levied on water.

“The article did not specify when the new measures will be implemented.

The USA BA filing clerk joins the Indian BA bus driver. It was nigh on 50 years go that I ventured to India as a young Arts graduate and became acquainted with the worth of my hard earned degree. I had barely been in the country before I came across the reality of the Bachelor of Arts bus driver. Having the tertiary qualification, I was told, was a pre-requisite for steering an omnibus through the streets of New Delhi.

What strange people, I thought back then. All those years of eduction to get such a humble earn.

In the years since I have become less superior. An Arts degree from the University of Tasmania these days probably would not guarantee you a bus driver interview. And in the United States, I read last night, it takes a BA to find a job as a file clerk.

“The college degree is becoming the new high school diploma: the new minimum requirement, albeit an expensive one, for getting even the lowest-level job.This prerequisite applies to everyone, including the receptionist, paralegals, administrative assistants and file clerks. Even the office ‘runner’ — the in-house courier who, for $10 an hour, ferries documents back and forth between the courthouse and the office — went to a four-year school.”

It didn’t take long. I wrote in chunky bits yesterday how governing is about to get a lot harder with the formal end of the Labor-Greens alliance. Well it hasn’t taken long for that to become apparent to even the dullest Greens basher within the Labor Party. From Lenore Taylor on the Fairfax websites:

There will be many more where that one came from.

Shorten was for turning: when the mobiles rung for Rudd

When you can out-tabloid Limited News, there’s something wrong with your values.

Lateline Tony Jones running interference from claims of the viewsmedia’s obsessive behaviour re “Rudd’s leadership” – it’s all down to “Labor leakage”? We don’t get a choice when it comes to “news”, with it’s half-life, who frames it if not “the viewsmedia”? Ruling/editing in or out what they regard as of “public interest”?