There's no question that Jakarta's charismatic new governor, Joko Widodo, is popular. But will his vast appeal and lofty promises translate into an effective government? Kevin Ponniah writes from Jakarta. 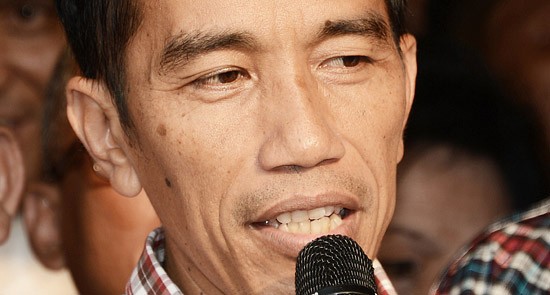 When torrential flooding once again brought Jakarta to a standstill last month, it was tempting to think the 10 million residents of Indonesia’s capital would finally turn on their “celebrity” governor. Yet as the death toll climbed to 26 and with 50,000 homeless, Joko Widodo, floating through metre-deep water on a wooden cart, was greeted as a saviour.

The man they call Indonesia’s Obama has a level of popular support the country’s tired stable of political contenders could only dream of matching — despite until recently being a political unknown.

In fact, recent polls suggest that if a presidential election were held today (the general election is set for 2014), Jokowi, as he is known, would win the popular vote, beating even former president Megawati Sukarnoputri and the front runner, retired general Prabowo Subianto.

As a newcomer to Jakartan politics, Jokowi flipped the existing order on its head in September last year when he won the first round of the gubernatorial election and went on to comfortably defeat incumbent Fauzi Bowo in the run-off. A furniture maker turned regional politician, Jokowi built his election campaign on his common man credentials — an image devoured by a public tired of aloof and pocket-lining leaders drawn from the Jakartan elite.

“He can find solutions to the small people’s problems, because he came from zero, he knows what their needs are,” Steven Hartanto, a 25-year-old university student living in the capital, told Crikey.

In January Jokowi was voted the third-best mayor in the world for his tenure of Solo, a mid-sized city of 500,000 residents in central Java. He left that position halfway through his second term to contest the Jakarta election — running a social media-driven campaign that somehow reignited the political fires of ordinary Jakartans, long used to empty campaign promises.

The fact the 46-year-old was a humble outsider is important, says Burhanuddin Muhtadi, a researcher and political analyst at the Indonesian Survey Institute.

Jokowi can be found on any given day around the city in his iconic blue-and-red chequered shirt — visiting slums, eating in streetside warungs and kissing babies’ foreheads. It’s almost as if he has forgotten that the election campaign is over.

But these unannounced visits, known as blusukan in Javanese, endear him to the city’s huddled masses.

“I came from Solo. By going around the city, I will understand [its] issues better,” he said recently, adding that his visits are not a publicity stunt, according to The Jakarta Post.

All over Jakarta, from taxi drivers to bartenders to market sellers, you hear the same thing over and over again –- Jokowi is an Indonesian politician who finally understands the people. During the recent floods he publicly apologised for his administration’s failures, a move seen as a token of the governor’s humility instead of a sign of weakness.

“He has very good public communications … He admitted that he failed to overcome the flooding, but people still love him,” said Burhanuddin. “But I don’t think blusukan is the answer to all of Jakarta’s problems.”

The fact Jokowi picked Basuki Purnama — an ethnic Chinese, known as “Ahok” — as his running mate is highly symbolic for the country’s small but powerful Chinese minority. “The first reason I voted for him is because he’s Chinese … If I’m not wrong, almost all the Chinese in Jakarta voted for him,” said William Fulgensius, 22, a Chinese-Indonesian student.

A fawning media have also been important in garnering public support, though some commentators are beginning to grow impatient for the decisive policymaking that was promised. As The Jakarta Post editorialised on January 22, 100 days into his leadership:

“There should be no more blusukan that only lead to media circuses, but rather concrete actions that prove Jokowi and his deputy are working for a better Jakarta.”

The governor has pushed through a raft of populist policies, including free education and healthcare cards for the poor and significantly raising the minimum wage. But the real test will be dealing with Jakarta’s most striking long-term problems: traffic jams and flooding.

In that domain, he has promised to finally begin the construction of an MRT metro line, as well as reviving the stalled Jakarta monorail project, whose abandoned columns stand like white elephants across the city. The governor has also mooted several grand projects: a giant sea wall to stop the sinking of Jakarta; 10,000 wells across the city to cope with flooding; an underground tunnel that will both drain floodwaters and divert traffic.

While not lacking in ambition, whether he can overcome Jakarta’s famously corrupt bureaucracy, a hostile parliament and the vested interests of big business is another question, says Burhanuddin. And despite rumours swirling that an early tilt at the presidency could be on the cards next year, most analysts believe the 2019 election will be Jokowi’s for the taking if his first term as governor even partly lives up to its soaring expectations.

Still, after years of political ineptitude, some Jakartans, though hopeful, are not expecting much.

“I’m not sure if there can ever be a non-corrupt politician in Jakarta,” said 25-year-old Steven. “But if he’s successful in his first term he can be as corrupt as he wants … It’s not a problem.”

What AUKUS means for Australia’s relationships in South-East Asia