Nick Xenophon's aborted trip to Malaysia grabbed plenty of headlines this week. But not more than the constant media speculation over the Labor leadership.

Independent MP Nick Xenophon made news a plenty over the weekend when he was deported by the Malaysian government, which claimed he was a security risk. Clever headlines around the term “xenophobia” ensued, with the MP using the media attention to further his concerns about the probity of the upcoming Malaysian election.

Foreign Minister Bob Carr weighed in on the issue, having previously attracted coverage by instructing DFAT to commence a report into the Prisoner X affair, canvassing all contact between Australia and Israel’s consulates and security agencies.

But remaining atop our media measurement chart are Prime Minister Julia Gillard, Opposition Leader Tony Abbott and Kevin Rudd, predominantly for widespread (Fairfax) coverage of Nielsen poll results showing that the public’s preference for preferred PM is now those names in reverse: Rudd, Abbott, then Gillard, with Malcolm Turnbull still well ahead of Abbott and plenty of commentators claiming any change to Rudd would see the focus turn immediately to the Liberal leadership. The media would undoubtedly give it a red hot go, no matter how far from reality it might be.

Cabinet minister Simon Crean accrued column inches saying the poll results were a “wake-up call” for the party, with some media outlets keen to connect his comments to his attendance at a restaurant with Kevin Rudd and his key caucus supporters last week. Finally, our notable omission of the week must be Western Australian Premier Colin Barnett, missing out on our top 20 despite his opposite number, Mark McGowan, rating just in time for the WA election in just over a fortnight. 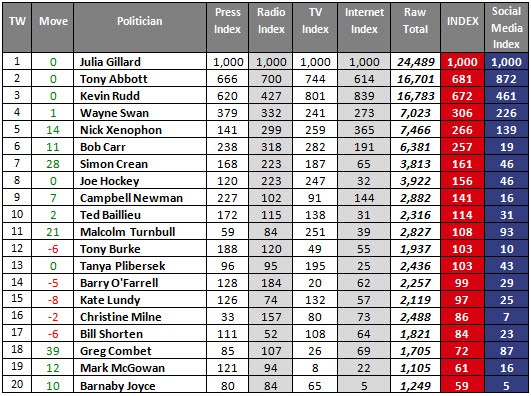 Treasurer Wayne Swan kept batting back criticism of the mining tax, even sending sound bites from Moscow for talkback callers to comment on.