Don’t take a Green for granted. So there are those in the Labor Party who think it is goodbye to bad rubbish now that the Greens have declared their agreement with the government is effectively over. Well, those political Labor geniuses are in for a shock. For from now until the dissolution of parliament the […]

Don’t take a Green for granted. So there are those in the Labor Party who think it is goodbye to bad rubbish now that the Greens have declared their agreement with the government is effectively over. Well, those political Labor geniuses are in for a shock. For from now until the dissolution of parliament the Greens have every incentive to show just how necessary their support has been to good government. Sure, they will continue to support supply bills and oppose no-confidence motions, but they are smart enough to defeat any other legislation for which there is a half a good reason to do so. Governing is about to get a lot harder.

And don’t count them out. For reasons I don’t understand the conventional wisdom seems to be that public support for the Greens is on the skids. Evidence for that view is difficult to find, with the published polls showing a decline of only one or two percentage points in House of Representatives voting intention. Nothing disastrous about that.

And in the Hobart Mercury this morning a poll on state government voting intentions showed the Green vote held up well — down on the last election, admittedly, but still a very healthy figure.

Keeping the story alive. The daily struggle to keep the Labor leadership story alive until the House of Representatives returns on 12 March will be a great test of journalistic ingenuity that deserves acknowledgement. Hence the Chunky Bits Daily Beat-Up Award. And our first worthy and clear-cut winner is? 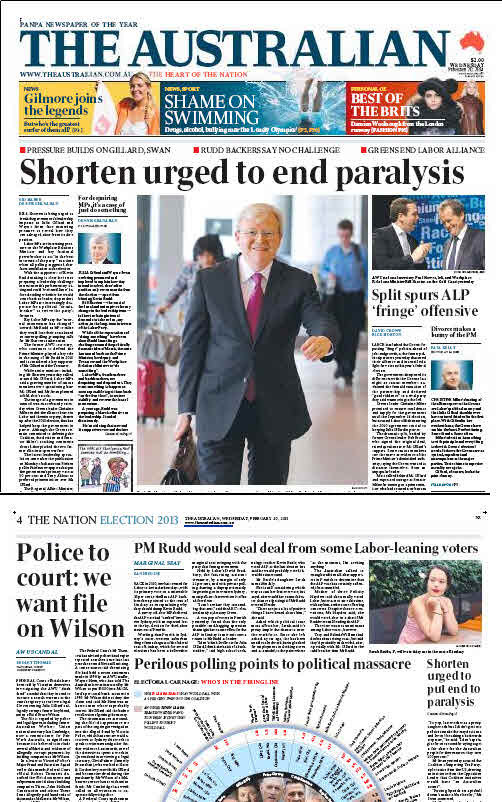 And a commendable effort award for this offering on the news.com.au website this morning: “Poker-faced Kevin Rudd is a threat to Julia Gillard, say body language experts.”

‘I’d like to thank the Academy’. A timely release of academic research into 60 years of Academy Award speeches that is published on an interactive website that enables us to prepare for this year’s event by creating our own version and comparing it with actual efforts from the past. 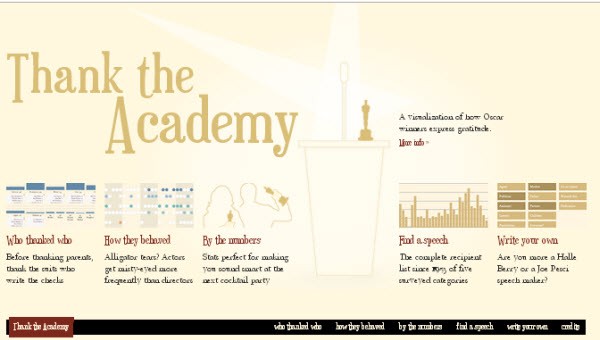 Georgia Tech master’s student Rebecca Rolfe (Digital Media) focused her research work on “gratitude” while analysing 60 years of Academy Awards acceptance speeches from 1953, the first year the awards ceremony was televised, to 2012. Rolfe noticed a certain pattern that is used by winners:

“Winners tend to start their speeches broadly by thanking the Academy or fellow nominees, then gradually make it more personal,” Rolfe said. “After reflecting on the win’s significance, they typically thank their peers, colleagues and sometimes even their lawyer before mentioning family.”

Nearly every speech (79 percent) closes with some version of ‘thank you’.

I’d like to thank the Academy… is one of the most famous phrases in Oscar history, but less than half of the winners (40 percent) actually say it.

Unsurprisingly, leading actresses are almost twice as likely to cry than leading actors. However, crying is a recent trend. Seventy one percent of tears have been shed since 1995, including 12 of the last 15 best actresses. Rolfe can only guess why.

‘Much like the movies, acceptance speeches are a type of performance,’ she says. ‘I believe the tears are real, but perhaps, maybe even subconsciously, actresses know what is expected of them when they accept the honor. Maybe the public has come to expect an emotional speech, so actresses are more emotional than they would be otherwise.’

Only one director has ever choked up: Steven Spielberg for Schindler’s List at the 1993 ceremony.

Among the other findings: you might see a man hoist Oscar into the air with one hand (26 percent), while nearly 60 percent of winning actresses cradle the statue with both hands, like a baby.

Almost half of winners thank their family. Only 5 percent (11 total mentions) thank God, who loses out to Hollywood power player Harvey Weinstein. The co-founder of Miramax has been thanked the most times (12) in Oscar history. 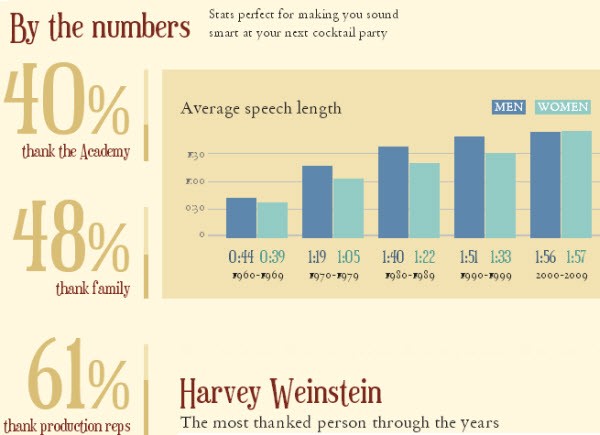 Speeches have become considerably longer over the years. In the 1960s, a typical speech was about 40 seconds long. Now it averages nearly two minutes, although the orchestra has only cut off nine winners in these prestigious categories.”

The media in Australia brings to mind the old yellow journalism quote from Randolph Hearst: The apocryphal story that artist Frederic Remington telegrammed Hearst to tell him all was quiet in Cuba and “There will be no war.” Hearst responded “Please remain. You furnish the pictures and I’ll furnish the war.”

Re the ongoing Rudd beat up: the journos will be scrambling to snaffle his tea leaves next to have them analysed for publication.