Tropfest cheat? What goes around comes around. An elderly woman’s car breaks down in the middle of nowhere. A man helps her get it started. She offers to pay him. The Good Samaritan refuses. The old lady goes to a cafe. She is served by a heavily pregnant waitress. She hands the pregnant waitress, dressed in […]

Tropfest cheat? What goes around comes around. An elderly woman’s car breaks down in the middle of nowhere. A man helps her get it started. She offers to pay him. The Good Samaritan refuses. The old lady goes to a cafe. She is served by a heavily pregnant waitress. She hands the pregnant waitress, dressed in an apron, a $100 bill. The waitress leaves the room to collect her change and, when she returns, the old woman has left. There is a note on the table, Pay it Forward style. It reads “we’ve all been there”. The pregnant waitress goes home to her husband. In a last moment twist, we discover the waitress’ husband is the same man who helped the old lady at the start.

That’s an account of what transpires in director Nicholas Clifford’s We’ve All Been There, which won the coveted fruit bowl trophy at Tropfest on Sunday night. It is also exactly what happens in The Chain of Love, a smaltzy song/musical video from American country musician Clay Walker. Except in Walker’s song, the note reads “I’ve been there too”.

Ordinarily such similarities — not just broad plot points but specific story, character and even visual details — would constitute an open and shut case of plagiarism. Viewers would be right to accuse Clifford of pilfering another artist’s work. But in this case to do so would be ridiculous. Near the beginning of We’ve All Been There, crucial words appear: “Based on the short story What Goes Around Comes Around by Anon.” The musical video and the short film were adapted from the same source material. The Tropfest film clearly cites this; Walker’s video does not.

Anyone who accuses Clifford’s film of plagiarism would have to also accuse Anna Karenina, now screening in Australian cinemas, of the same crime. It is the latest big screen adaptation of Leo Tolstoy’s classic novel. But this didn’t stop The Australian from running the story anyway, despite identifying the (shared) source material. — Luke Buckmaster (read the full story at Cinetology)

Rundle: The Oz and freedom. In its 2010 election, the Dutch gave the world a nasty shock with a surge in support to Geert Wilders’ right-wing, xenophobic Freedom Party, giving it 16% of the vote and a kingmaking role in the new centre-right coalition government. Two years later, Wilders, who is speaking in Melbourne tonight to kick off his Australian speaking tour, brought down the government, hoping for major gains in a new election. There were — for the Left.

The Freedom Party’s vote fell by a third to 10%. Wilders carried on moaning about attacks on free speech while trying to ban the Koran, and campaigning for animal rights, but he was widely dismissed as a sad obsessive, yesterday’s man. Not in The Australian, which incorrectly claimed the Freedom Party has the balance of power in the Dutch Parliament (the centrist coalition holds 79 seats in the 150-seat Parliament; Freedom and the Socialist Party have 15 seats each) and gave Wilders valuable op-ed space to reminisce about his failed attempt to visit Australia in his youth — he couldn’t afford the trip — and how a Middle East trip convinced that Islam was a “totalitarian” system under which “there is no prosperity”.

Pity Wilders never made that trip, as the junk nature of such an observation is obvious to anyone in the neighbourhood of Indonesia and Malaysia — or he could simply look to Turkey, which has the highest economic growth in the European/Meditteranean region. Cue predictable outrage about “free speech”, opinion, etc. But why is The Oz having any truck with such a manifestly deranged trash? Wilders is just another obsessive, in the manner of people like Christopher Monckton and James Delingpole, that the Right loves to ship out for rah-rah tours. What is their addiction to people who manifestly discredit their arguments? — Guy Rundle

The Age diluting GP truth? Growing population density in old established suburbs increases demand for parks, but it’s very hard and very expensive to retro-fit new ones. Existing urban parks accordingly need to be managed like the precious and vulnerable old creatures they are. So it’s distressing to read in The Age that the level of water in Albert Park Lake in inner-city Melbourne is now so low sailing activities have been suspended.

The culprit evidently isn’t this year’s long dry summer. According to The Age, the finger is pointing at the Grand Prix Corporation, which traditionally runs the opening round of the F1 season in Albert Park. The Age splashed the story prominently across seven columns on the top of page three in Monday’s print edition.

But the real problem here, I think, isn’t with the Grand Prix Corporation or Parks Victoria but with The Age. This story plumbs new depths in Fairfax’s headlong race to the bottom of the tabloid barrel. First, there’s the “loaded question” style headline — “Grand Prix denies …”. As long as a story begins with “denies”, it can imply anything the writer wants. That’s up there with “Obama denies he was born outside the US”, “Tony denies he’s in love with Julia” and “Queen denies she was a cold war spy”. It frames the story in a way that strongly suggests the Grand Prix Corporation has done something of such gravity it has to deny it.

Second, the entire story turns on the accusation of a single person. There’s no corroborating testimony from anyone else to support the claim the Grand Prix Corp is to blame. Third, there’s nothing to suggest she has the expertise to know how much water the Corporation has taken compared to other users. In fact she’s an aggrieved party whose son’s been disadvantaged by the fall in water level. — Alan Davies (read the full story at The Urbanist)

Front page of the day. An absolute ripper of a Burke’s Backyard magazine front cover for its final edition. Bonus reason to love it: that gnome is from Don Burke’s personal collection. 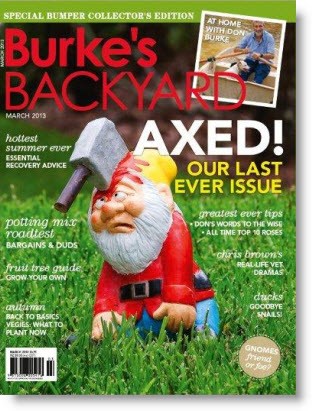 We need the Wilders of this world, to balance the “Wilderness” on the other side, that some of us are always pointing at.
To prove “we” can be as bad as them.

Who’d have thought that the Burke’s Backyard magazine could *ever* outdo the NT News. Bravo Mr Burke!