There's no escaping the leadership focus of the print media: it's one of the few remaining ways it can engage consumer interest. There was a flood of it in Fairfax papers today. 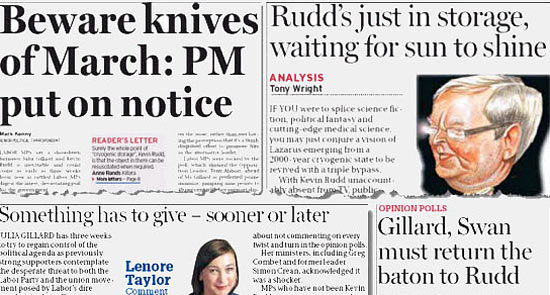 The vexing question for Australia’s political journalists is: have they gone too early? Can they sustain leadership speculation all the way until March 12, when Parliament resumes? There’s a Senate sitting next week, but MPs won’t be returning to Canberra for three weeks.

It’s a tough ask, but surely they’re up to it?

Although, a word of warning: for most of Julia Gillard’s prime ministership, journalists have been setting her deadlines and tests that she must meet or she’ll be out. So far, she has sailed resolutely right past all of them without losing her job. What’s to say the next three weeks won’t yield the same result?

And one must be a little concerned about Fairfax journalists. Right across the three major mastheads, from the most senior journalists down the janitor, they’ve been flogging yesterday’s Nielsen poll with all they’ve got. For a poll that told us nothing we didn’t already know from other polls, it’s been a great effort. If only Fairfax would pay John Stirton to run a regular fortnightly poll, we might actually be able to glean some trend information from it like we can from Essential, Newspoll and, for the completists, Morgan. Instead, we’ve had the sight of otherwise very good journalists pretending en masse that Nielsen has afforded a glimpse of hitherto closely guarded secrets.

But plainly, this has dramatically skewed the political agenda. On Sunday Labor released a major manufacturing policy with which it intended to sell its credentials for managing the economy in the interests of working Australians. The policy has almost vanished without trace in the mainstream media, although John Durie in The Australian‘s Business section had some follow-up analysis today. Instead, political coverage is almost entirely about the leadership. Even those of us reluctant to talk about it find ourselves answering questions on radio about it, or writing complaining pieces like this one.

The capacity of major media outlets to create a feedback loop that alters the political agenda remains one of their distinguishing features at a time when they’re under threat on so many other fronts. People can rail against it all they like on social media, but Australian political journalism is structured to enable such feedback loops, courtesy of the dominance of a small number of companies.

Moreover, the failing health of our two big newspaper companies — never mind what partisan agendas they might have — means that leadership spills are one of the few remaining guaranteed ways to engage consumers and at least temporarily lift circulation and clicks. The ideal political world for our remaining newspapers in the few years they have left would be a permanently hung Parliament generated by annual elections filled with parties incessantly engaged in leadership spills.

That’s partly why a Rudd comeback so appeals to the media, because it increases the chances that the Liberals might reconsider Tony Abbott’s position if Rudd takes Labor into the lead.

It’s not all bad. Last night, Sky News held an election year policy forum focusing on education. Actual journalists talking about policy with informed, interested and relevant interlocutors. Sky can provide incessant leadership speculation with the best of them, but it has decided to direct at least some resources to discussing substantive policy issues. Our newspapers … not so much.

But we’re stuck with this model until the old mastheads expire and we find out the answer to that increasingly ironic question about where we’ll find quality journalism when newspapers are history.

Bagging the gallery isn’t the whole story re: leadership ‘beat-up’

CAn they keep it up for 3 weeks, they have been going for about 3 years so what is another 3 weeks?!

I still live in hope that at some point in the next 7 months the ridiculousness of the Coalitions policies might get discussed at some point but with every day of journalistic tosh that hope grows fainter.

I just couldn’t get over the ALP leadership opinion pieces this morning in the Fairfax media. One big circle jurk (intentional!).

I thought I must have clicked on The Oz by mistake.

“When newspaper’s are history”?
Where do we find them now – three doors down from “Rocking-horse-shit ‘R Us”?
The current crop are more like navel-gazing knuckleheads, “I can type – therefore I am”?

Of course they can keep going. They even seem to write to each other: the game plan at Fairfax is to make life difficult for Julia Gillard so that the Labor Party restores Rudd and goes to an early election , which it will lose in a landslide that will cement liberal party policies for at least two terms, with changes to industrial relations along US lines, which everyone knows are so “flexible”. Laura Tingle writes a piece that seems addressed to Fairfax owners: you might think that Rudd will go to an early election but consider, he will desperately want a budget that will help give him some reputation for competent economic management (Rudd as leader: Rupert, do you forgive my story in the Monthly, just 4 years ago this month, telling us all to accept that the GFC means the end of neo-liberal policies?). This will mean that the election timing will remain much the same. So even if the Labor Party restores Rudd there won’t be an early election and an Abbott budget. And will anyone in Labor risk Rudd? Will anyone else want a glorious defeat? perhaps Fairfax should reconsider its strategy. Of course, this does not mean that they should stop bagging Julia Gillard for all they are worth. It is iikely that MSM will succeed in bringing down Labor. We all wait for their journalists to ask Tony difficult questions about the Carbon tax (which cities have shut down, Tony?), the mining tax and just exactly what he intends to do to the welfare state to put the budget back in the black, where of course it must be (low debt, low wages, “flexible” conditions, what could be more perfect?). Please do not hold your breath …