In Malaysia, where the ruling party has a long record of stifling dissent, the media has run a smear campaign against Nick Xenophon for harming the country's "well-being". Freelance journalist Hari Raj reports.

The heavy hand of the Malaysian government can be seen in the local media’s response to the deportation of independent Senator Nick Xenophon over the weekend. Malaysian editors have confirmed to Crikey they were told to insert certain lines into their coverage.

Editors were instructed to point out Xenophon’s well-documented anti-palm oil and pro-gay marriage stance, the rationale being that this would help undermine his position. Or, to put it delicately, paint Xenophon — detained and deported on Sunday as a “security risk”, the latest edition in a long-running series of government efforts to stifle dissenting voices — as a foreign devil bent on smashing rice bowls and interfering with Malaysia’s economy and culture as well as its elections.

The Malay-language media took an even more outraged tone, with quotes from various organisations asserting that Xenophon should be banned from entering the country as he “actively promotes LGBT activities” and “wayward culture”. Many ran with a state-approved piece saying that Xenophon was found to be “detrimental to the country’s well-being“. The latter included quotes from former Malaysian prime minister Dr Mahathir Mohamad, who said the events would not jeopardise the relationship between the two countries — and added Malaysia didn’t need to entertain Australian criticism of its actions.

Selective perception was in fine form yesterday, as a piece in The Australian attacking Xenophon proved popular in the Malaysian mainstream media. Most outlets ran a piece by the state news agency Bernama that repeated some of The Oz’s more astonishing generalisations — among them that Malaysia is “one of the most democratic and freewheeling nations in Southeast Asia” and that its elections are “better than in most parts of the world”.

The most recent US State Department human rights report on Malaysia does a succinct job of refuting these claims, noting there are “obstacles preventing opposition parties from competing on equal terms with the ruling coalition”. 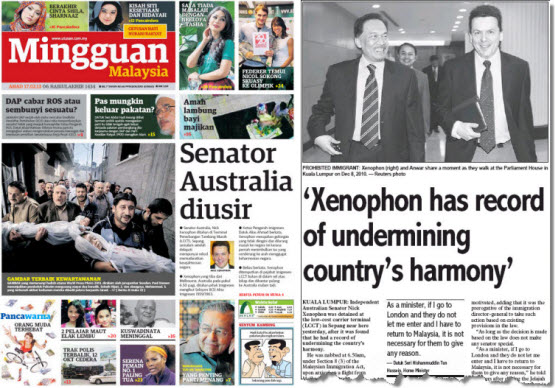 So how did Xenophon earn the ire of the Malaysian government? His initial dalliance with Malaysian politics came last year, when he and a group of other politicians were invited by Opposition Leader Anwar Ibrahim to take part in a fact-finding mission on the electoral process.

Xenophon and others were caught up in the heavy-handed government response to the third protest march organised by Bersih, a non-governmental organisation that is pushing for free and fair elections. The opposition has endorsed Bersih’s calls for electoral reform and oversight. The country’s ruling coalition, Barisan Nasional, has not — and this is where things get sticky.

Barisan Nasional has been in power since Malaysia’s independence from British rule in 1957. Control of the media is one of the pills it uses to maintain its election; print and broadcast media in Malaysia require a licence from the government, which can be revoked should content deemed undesirable make an appearance.

This approach ensured that until the relatively recent advent of the internet and new media, the opposition was starved of the oxygen of exposure or debate. It helped create and maintain a culture in which criticism of the government was rare, or perceived as tantamount to sedition. It remains common for journalists in the mainstream media to have stories spiked or altered because of political edicts. Xenophon-related coverage is no exception.

However, this week’s smear campaign represents a quantum leap forward in terms of subtlety. Last May, the New Straits Times took a transcript of a 2009 speech Xenophon made that was critical of Scientology and substituted mention of it with the word “Islam”. This is the same pro-government paper that is apparently unaware of the irony involved in running an editorial pointing out that being elected is not an indicator of merit.

Local support for Xenophon, however, is hardly universal. There are many who see him as somewhere between a meddler  and an acolyte of Anwar, aided by reports that paint him as Anwar’s envoy to the Australian government. Xenophon is of course entitled to support the opposition, but doing so makes his claim to be an independent observer somewhat tenuous.

Australia was meant to send a bipartisan delegation to meet with Malaysian officials, which would have included Labor MP Steve Georganas, Liberal Mal Washer and Nationals Senator John Williams. This has since been cancelled, and some reports say that Xenophon was never part of the delegation.

Local opinion of Anwar is similarly mixed, even among those who do not support the Malaysian government, but the genius of its campaign against him was to demonise his calls for reform. For millions of Malaysians, change — not just as a goal, but as a concept — became anathema, something worthy of protest and scorn.

Departing from the status quo remains tricky, as evinced by hitches in the government’s unprecedented move to allow observers for the upcoming elections, which must take place by June. If Xenophon and those invited by Anwar are likely to be rejected by the government — and vice versa — then surely the likes of of Transparency International would appeal to either side.

Last month, the local arm of Transparency International declined the offer due to concerns over the terms offered to observers. In Malaysia, change is a road rich with speed bumps.

*The writer is a former journalist and occasional columnist for The Star in Malaysia. He speaks Malay

A foreign politician or political operative interfering in a nation’s domestic policy has long been a no-no in international relations.
It’s a pity the Australian press does not, on behalf of the Australian people, express similar outrage when so-called “Lord” Monckton, who describes himself in (UK) political operative terms (even if he is a has-been), comes to this country and stirs up the local loonies on climate change (domestic policy) denial, as he did in Noosa in 2010.

They can spot a fellow traveller when they see them – maybe it’s the collar?

“Prohibited immigrant” ? Really? He wants to live there? I’d have thought just a visit was sufficient

Gosh golly, it appears there are newspapers even worse than Murdoch’s. Who knew…?

Lucky old Greg Sheridan, since Suharto was pushed aside, he has been looking for a south east Asian despot to heap praise on.