Labor leadership speculation? Spare us. The Liberals (yes, Libs) are agitating for gay marriage. The Aussie journo caught between Prisoner X and the spies. What the Malaysian media were told to say about Nick Xenophon. And fighting for space in the Canberra press gallery (ours is safe, at least). 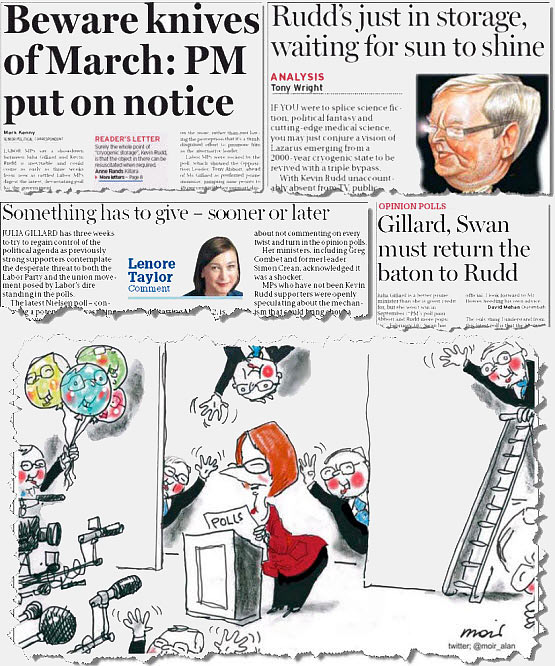 “The vexing question for Australia’s political journalists is: have they gone too early? Can they sustain leadership speculation all the way until March 12, when Parliament resumes? There’s a Senate sitting next week, but MPs won’t be returning to Canberra for three weeks.

You know we dont have to read it yeah?

Rudd is yesterdays man!!!! When are Journo’s going to stop this pathetic “THEIR Opinion” reporting? POLICY/FACTS are what the Public want & NEED. No wonder DER SPIEGEL is popular and Oz newspapers are going down the drain. CRIKEY your turning me right off subscribing again- your losing the plot. Have read CRIKEY since its early days but notice a lowering of qulaity content and reporting. SINCERELY, D RYAN

It’s curious what gets passed for humour these days?

Come on guys. Once was funny.