Senator Nick Xenophon was deported from Malaysia on the weekend after being classified a security risk by the country's authorities. Here's why they kicked him out. 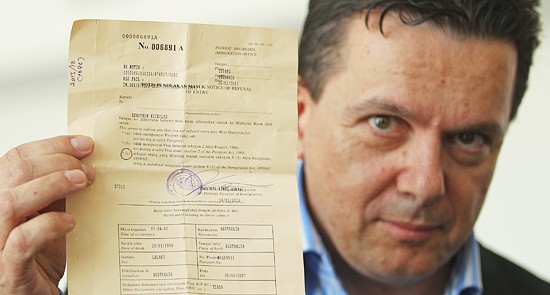 Although it is a minor diplomatic affront to Australia, it was unsurprising that Senator Nick Xenophon was deported from Malaysia yesterday. Most regional governments rarely tolerate criticism of how they exercise political power. Being kicked out of a regional country — or, worse, facing court — has been, for some regional critics, a relatively common experience.

Xenophon was detained and deported as a “security risk” under the Immigration Act and this status follows the sweeping logic of Malaysia’s Internal Security Act (ISA). The ISA is a grab-all law, introduced by the colonial British to repress any form of dissent.

Xenophon’s identification as a “security risk” reflects the high degree of concern that Malaysia’s ruling Barisan Nasional (BN — National Front) government has over the coming Malaysian elections. The elections are scheduled to be held by June 27.

Comprised of the United Malay National Organisation (UMNO), the Malaysian Chinese Association (MCA), the Malaysian Indian Congress (MIC) and occasional minor parties, the BN and its predecessor organisation has held power since independence in 1957.

Arrayed against the BN is the Pakatan Ranyat (PR — People’s Alliance), led by former UNMO deputy leader Dr Anwar Ibrahim. Anwar was BN’s deputy PM and finance minister, but in 1998 spectacularly fell out with then-prime minister Mahathir Mohamad over financial policy, being subsequently — and wrongly — imprisoned for sodomy.

In the 2008 elections, the then-new PR gained 82 seats, denying the BN a two-thirds majority for the first time since 1969. The PR argues that the government retains power through rigging electoral boundaries, making it easier for government parties to win seats but more difficult for opposition parties.

These three parties, each representing very different constituencies, might form a majority following fair elections. But PAS and the DAP have traditionally viewed each other with hostility and both regard Anwar’s leadership from a minority position as a necessary but undesirable compromise.

Should the PR manage to topple the BN — which remains unlikely under the present electoral arrangements — its agenda in government would be at the least inconsistent, if not contradictory. But first they have to get there.

The Malaysian government has regarded the report and Xenophon’s raising the issue of electoral reform within Malaysia constituted “interfering” in Malaysia’s domestic politics. As such, he had breached the all-embracing ISA and was thus detained and deported under a related provision of the Immigration Act.

But the Malaysian government is sensitive to the growing chorus of domestic and international criticism of its electoral system. For the first time, it has allowed election observers to the forthcoming elections. Six organisations have been approved for election observation.

One of those approved organisations, the Malaysian branch of the anti-corruption watchdog Transparency International, has declined to observe the elections. It refused to participate, citing reservations about the election commission’s election observer terms of reference.

*Professor Damien Kingsbury is director of Deakin University’s Centre for Citizenship, Development and Human Rights, which requested Malaysian election observer accreditation last year, following its earlier election observation in East Timor. Despite an initial positive response from Malaysia’s election commissioner, there has been no further reply to requests to formalise the CCDHR’s observer accreditation to the elections.

Well if I was rigging elections I wouldn’t want Nick looking into it. He’s a smart bloke.

The only politician in this country whose integrity & probity are beyond question.

We need more people like him in parliament instead of the ciphers in both Lib & Lab. If the party in power in Malaysia had nothing to hide they wouldn’t have done this.

actually, a lot of the demands made by the Opposition coalition (PKR, DAP and PAS) had been accepted and implemented into the electoral arrangements. Do not just see this from the Opposition POV. The problem to me, it seems, that yes – the Opposition coalition ‘might not manage to topple the BN — which remains unlikely under the present electoral arrangements ’ – which is why they are trying to change it to fit their agenda – which in turn would NOT make it a fair and democratic election, which ironically, goes against their ‘Bersih’ campaign. Is their purpose to form a cleaner and fairer government by PROVING to the people that they are capable, or are they just trying to BE the government by hook or by crook?

In my observation – the PR coalition fail to get the majority support not so much of ‘rigged’ elections, it’s because they have yet to prove themselves. They should sort out their parties’ vision to collaborate, not clash against each other. And remember that they are to SERVE the people, not spread discord and disharmony among them.