Has Tropfest got too big for its own good? Crikey speaks to organiser John Polson after another wildly successful event in Sydney -- which some filmmakers refuse to enter. 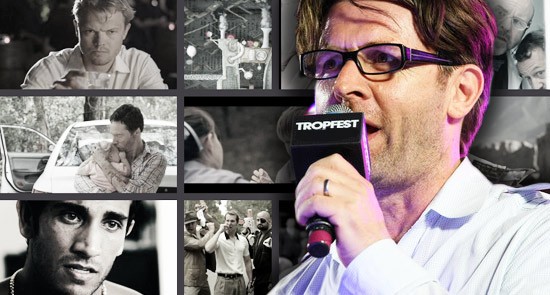 In 1993 Tropfest was held at a cafe in front of 200 people. Last night 150,000 people at various locations around Australia, including an estimated 90,000 in Sydney’s Domain, celebrated the 21st birthday of what has become an international phenomenon.

John Polson’s little film festival got very big. Unmanageably and unfairly big, according to some.

It now attracts 700 annual applicants from aspiring filmmakers, Hollywood celebrities, lucrative sponsorship deals and has spawned various foreign spin-offs from Berlin to New York, Toronto, London and Abu Dhabi. Last night’s winner, Victorian Nicholas Clifford, drove away in a new Toyota Corolla with $10,000 prize money, a spiffy new camera and a trip to LA for a week of meetings with film industry executives.

Watch the 16 films this or any year and you’ll see a smattering of famous faces coated in high production values. Successful entries are often financed by production companies, sometimes film funding bodies, and cost as much as $50,000. At the heart of Tropfest lies a huge discrepancy between the reality of the festival as a commercial enterprise and the perception of it as a breeding ground for amateur filmmakers to come good.

“Not once in Tropfest’s 21-year history have I ever said the word ‘amateur’. I’ve never said that [and] this is not about that,” Polson told Crikey this morning. “In terms of (increasing) budgets, I won’t pretend that’s not true. But I’ve never said we’re going to discriminate against big budgets.”

Last night he told the crowd filmmakers who spend a couple of hundred bucks can be exposed to a new world of opportunity. He insists smaller budget films can succeed — in 2011 a short that cost a paltry $80 won the top gong.

“Anybody who knows filmmakers knows money doesn’t really help you. The films that got in last night are ones with good ideas, good actors. I would never put on a budget restriction … That’s the beauty of art. The things that are the most important are free. The one that won last night, I don’t know how much the budget cost and I don’t care.”

The 47-year-old filmmaker turned international festival tsar says Tropfest “began quite selfishly as a way to show people my crappy short film. I had no plan at all and, frankly, as much as I hate to admit it, I barely have a plan today.”

“I don’t think it’s snap decisions, and by the way, what’s wrong with going with your heart?”

It certainly seems like a well-oiled machine. The hundreds of applicants who submit their films, which must include a signature motif (this year’s was “balloon”) forego copyright, leaving the company to distribute their work as it wishes. The 16 final films are screened, in addition to its live audience and national broadcast, on The Sydney Morning Herald website. A free DVD is included in Fairfax papers.

Melbourne-based filmmaker Clint Cure believes this puts some filmmakers off. “If you get selected, you get exposure but you can’t really do anything with it,” he told Crikey. “You can’t send it off to another festival. It’s very rare for other festivals to do this. Some do it, but you’re not exclusively owned by them.”

Local celebrities also star in the shorts themselves. The appearances of well-established actors in a festival that gives the appearance of fostering a DIY ethos is a regular criticism.

Polson, who picks all the finalists himself, dismisses this. “This year, two of Australia’s best-known actors were in a film that didn’t get shortlisted. So that’s what I say about people complaining about the celebrity factor,” he said.

Worthington joined a panel of judges that included Magda Szubanski, Richard Roxburgh and Rebecca Gibney. Polson says the judges first watch the 16 films with the audience on the same night and spend around 10 minutes at the end determining the winners. This means they inevitably rush to judgement on the film’s most important prizes.

He countered: “Listen, this is Tropfest, what are you going to do? Turn this into the Sydney Film Festival, deliberate on it, and put it in the paper two weeks later? This is what it is. It’s live. It’s fun. I don’t think it’s snap decisions, and by the way, what’s wrong with going with your heart?”

Two decades of rubbing shoulders with Hollywood’s elite seems to have boosted the organiser’s profile. Polson has directed Hollywood movies such as 2005’s Hide and Seek, starring Robert De Niro and Dakota Fanning, and 2009’s Tenderness, staring Russell Crowe and Laura Dern. “Actually,” he said, “to be honest, I think it’s damaged my career pretty badly.

“But I have no regrets about that. The people who hired me for Hide and Seek and Tenderness probably didn’t even know Tropfest existed.”

Tropfest winner a cheat? Not this time

Now that Tropfest is so successful, maybe they can stop sucking off the public teat and give back Government funding for use by less well off arts companies.

LUKE B: Gee you can write. V interesting article.

I used to go to the movies once a week. Since then I’ve split with the guy I went with, so haven’t been commenting at your blogsite. Cheers V

I can see how you made that mistake, Dakota Fanny, not Fanning as you’ve now changed it to, actually starred in a movie with Robert Di Rierro. I think the movie was Booty Call.