While most people having their unpopularity exposed on front pages across the nation would pull the blankets over their head and stay in bed, the Prime Minister was up and about and appearing on breakfast television.

The appropriate slogan found. Julia Gillard certainly can put a brave face on. While most people having their unpopularity exposed on front pages across the nation would pull the blankets over their head and stay in bed, the Prime Minister was up and about and appearing on breakfast television.

Gillard told the Seven Network’s Sunrise program she wasn’t losing any sleep over the latest opinion poll showing Labor getting a drubbing.

“We see a lot of opinion polls.

“If I spent time worrying about them and commentating on opinion polls then I wouldn’t have the time to get my job done.

“So each and every day I just let that wash through and I focus on what I need to do as prime minister.”

Alfred E. Neumann would be proud of her. 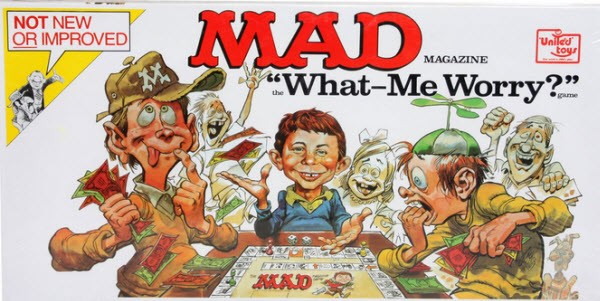 Take Kevin at his word. Kevin Rudd surely knows that to break his commitment of last year not to challenge again for the Labor leadership would see any second prime ministerial coming marred by the same promise-breaker millstone that so severely harms Gillard. He really has no option but to sit on the backbench not as a Paul Keating gathering the numbers against Bob Hawke but rather as a John Howard patiently hoping that Gillard does an Alexander Downer and steps down for the good of the party.

There are a couple of signs that the markets think such a changeover is possible. The likelihood of there being a Labor leadership change is now assessed by the Crikey Leadership Indicator as being greater than 50%. At the start of this year that chance was at only 20%.

When it comes to the probability of Labor winning the election when it finally comes, despite this morning’s unfavourable poll result, there has actually been a slight improvement for the government. 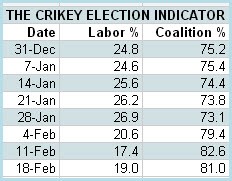 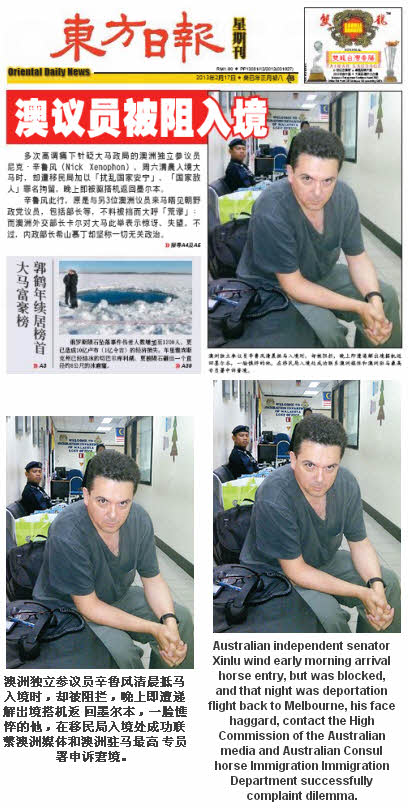 And I was pleased to see the note of sympathy for the good Senator  in the way the news.com.au website reported his deportation from Malaysia. Quite apart from sitting around in an airport terminal for most of the day the poor fellow “was forced to sleep on a plane in economy class for two nights.”

A politician’s lot surely is a hard one.

Nearly a plea bargain for Ben Zygier before his death in the cell? From a page one story in this morning’s Jerusalem Post: 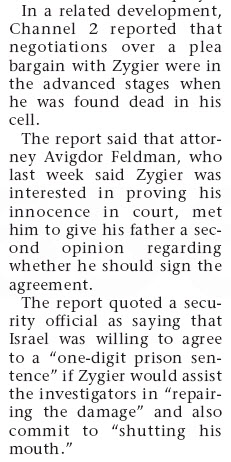 Missing the gorilla. The psychologists call it “inattentional blindness” — when you ask someone to perform a challenging task, without realising it, their attention narrows and blocks out other things. So, often, they literally can’t see even a huge, hairy gorilla that appears directly in front of them. You will find the classic experimental example of it on YouTube where subjects have to count how many times people in white shirts pass a basketball. By focusing their attention on the ball, you tend to not notice when a guy in a gorilla suit shows up.

Now NPR in the United States reports on another example where radiologists, experts at noticing things, were asked to review the slides of lungs, on which a picture of a man in a gorilla suit shaking his fist was superimposed, for cancerous nodules. Trafton Drew, an attention researcher at Harvard Medical School, wanted to see if they would notice a gorilla the size of a matchbook glaring angrily at them from inside the slide.But they didn’t: 83% of the radiologists missed it. 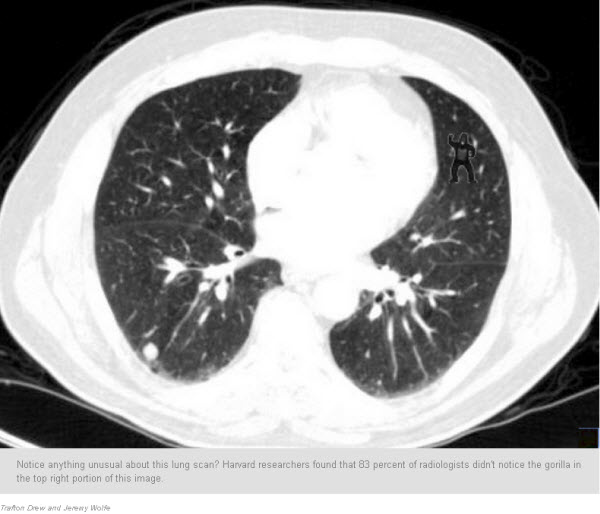 “This wasn’t because the eyes of the radiologists didn’t happen to fall on the large, angry gorilla. Instead, the problem was in the way their brains had framed what they were doing. They were looking for cancer nodules, not gorillas. ‘They look right at it, but because they’re not looking for a gorilla, they don’t see that it’s a gorilla,’ Drew says.

“In other words, what we’re thinking about — what we’re focused on — filters the world around us so aggressively that it literally shapes what we see. So, Drew says, we need to think carefully about the instructions we give to professional searchers like radiologists or people looking for terrorist activity, because what we tell them to look for will in part determine what they see and don’t see.”

Labor’s off message and out of soft power

What can she do – like that magazine – Rupert’s got her covered in his versions of it.

Ah, the pitfalls on relying on Google translate rather than actual knowledge of how a language works. Xenophon’s name has been translated phonetically into three characters, “xin” “lu” and “feng” in pingying so when the characters are pronounced together, they sound like an approximation of “Xenophon”.

“Feng” however, also happens to mean “wind” by itself.

Often characters must be paired with another to create actual meaning or the equivalent of the English “word”. Google translate, not recognising “xin lu” as an existing “word”, uses pingying instead of an English translation, but because “feng” is an actual word, translates it as the English “wind”.

Anyone who is proficient in reading Chinese would know that “feng” is being used for the phonetics of that character, and not what the character would otherwise symbolise by itself.

No love from a Australian-Chinese woman who is sick of Westernpeople using Chinese as a gimmick without even trying to grasp a basic understanding of the language.