There's no hiding from coal's long-term decline in Europe and the United States, irrespective of cherry-picked data floating around cyberspace about a coal revival. Don't believe what you read.

Forget talk of a coal revival based on cherry-picked data floating around cyberspace. The coal sector is facing significant headwinds in Europe, the US and possibly China.

Take Europe, and historical coal consumption for the EU since 1990. The overall trend is clearly down. There was an uptick in the last two years representing a bit of a recovery from the GFC collapse, but consumption is still below 2007 levels. 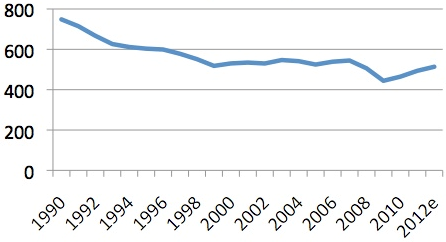 And looking forward the prognosis is not good. While low carbon prices and low cost US coal exports (driven by shale gas pushing it out of the US market) have helped, new air pollution requirements to apply from 2016 should counter any ongoing revival. According to analysis from Bloomberg New Energy Finance, only 40% of coal fired capacity will be able to comply (as illustrated below).

For the remaining non-compliant power plants, operators face large costs to upgrade their plant to standards. Given the troubled outlook for coal longer term, many will opt to shut down instead.

In the US there has also been a recent small uptick in coal consumption. But when you look over a longer time period the picture is bleak. According to the International Energy Agency:

“… around one-third of the 340 GW of coal-fired capacity is more than 30 years old and relatively inefficient, and coal-fired generation faces more stringent pollution standards, for example on mercury, which may well lead to accelerated retirements of older plants. There has been hardly any net increase in coal-fired capacity since 2000.”

Since 2009 US power companies have announced plans to shut more than 40GW of coal plant (more than Australia’s entire coal power capacity) because it’s just not worth the cost of major upgrades to get these plants up to standard to meet new air quality pollution requirements.

Reuters reports today that the largest owner of US coal power plant capacity, AEP, is shifting away from coal due to low gas prices and the multi-billion dollar cost of upgrading coal plant to meet environmental requirements. According to AEP CEO Nick Atkins:

Pulling this all together, data from the US Energy Information Administration shows how coal’s share of the electricity market has declined. In their most recent projections they expect coal output in 2016 to be lower in absolute terms than it was in 1990 — despite the EIA expecting that US gas prices will increase substantially in the near term. While there is a slight revival in coal after 2016, that’s where President Obama’s State of the Union vow to act on carbon emissions comes in. The EPA is looking to regulate CO2 emissions from existing coal plant which should prevent any post 2016 revival. 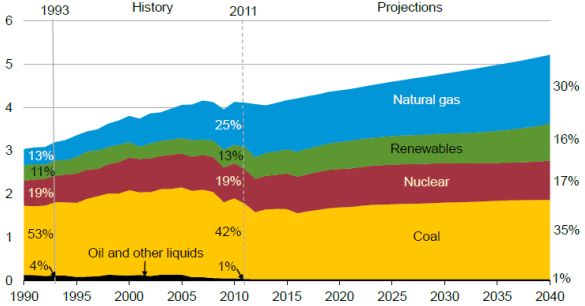 Coal is a long way from being completely phased out in Europe and the US, but it is in serious long-term decline. The saviour is China and India — if China halts coal consumption growth consistent with its State Council plan, coal exporters are in serious trouble.

Our love affair with coal: hotter than ever

I’m thinking that if you’re going to write an article about coal’s decline in the US, you should show a graph other than one that shows coal’s increase in the future, and still remaining the #1 fuel source in the US (last chart). Tough argument to uphold.

Forget Coal, Hydrogen will be the power sourse of the future. It can fuel land, air and sea transport, supply local power via fuel cells. When Fusion power supply is sorted (and the day comes ever closer) the end of coal will be complete, and none too soon.
The only thing stalling the hydrogen economy is that oil companies are wedded to hydrocarbons, governments action will change this.
Of course the only hope is that the environmental legacy of coal will not be so bad it cannot be reversed.

@MJPC Hydrogen is not an energy source. It can be generated by any ( e.g. solar, nuclear or fossil fuel) energy source but it is merely a way of storing and distributing energy.

Talk about cherry-picking. Why on Earth would you offer a commentary on the future of coal based on anything other than global consumption trends and projections, which are all going off the chart?

Strangely enough it is in this country that coal consumption is falling, through the steel industry tanking badly and coal fired electricity (mostly brown) also going through a bit of a downturn. Renewables are making some of the dent by replacing capacity, but really the massive increase in retail electricity prices are driving down demand, so that where we had projected a capacity shortfall a decade ago, there is now excess capacity in the system. Almost makes me feel that the way the state owned distributors are ripping me off for my power is worth it.