Labor's blue collar pitch: Bernard Keane on the economic narrative. We love a punt, supposedly, but most of us would ban sports betting. Nick Xenophon booted from Malaysia: the political context. Mark Latham takes on Piers Akerman. And The Conversation goes global.

You’re appalled at elite sportsmen suspected of performance-enhancing doping, new polling from Essential Research confirms today. A fair few of you would attend fewer games and watch fewer matches on television if your team was found to have taken drugs. Some would even switch teams. 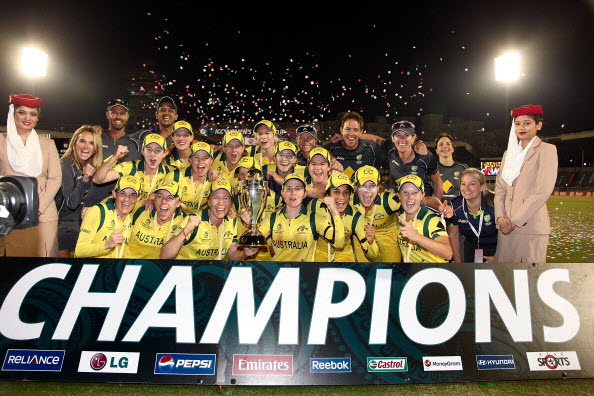 Not that you’ve probably heard of Jodie Fields, captain of the Southern Stars national cricket side that became champions of the world overnight in India. Or Jess Cameron, who belted a half-century to give Australia a World Cup final record run tally of 259. Or Ellyse Perry, who took three vital wickets to dismiss the West Indies cheaply and claim the trophy.

The Southern Stars — who have to juggle careers to play — now have six World Cup trophies in the cabinet. The blokes have four.

Next summer the Southern Stars will be back in action on home soil. So now you’ll have something else to watch, sports fans.

Please put this win in perspective — it’s banal to paint it as a fabulous achievement.

How many women play cricket worldwide? And given women aren’t particularly encouraged to play a lot of sport in many cricket mad countries like India and Pakistan, the competition would be nowhere near as tough as the men’s comp.

And i’m guessing women’s sport in India possibly attracts far less financial support than women’s sport in Australia (which i understand is far less than the funding that goes to the men’s team!), so whoopie do, … women from comfy middle class Australia flog the few women from third world countries who play a dull game like cricket.

If women’s cricket did attract a big audience and consequently a lot of funding, you can bet it would be rife with the same drugs and corruption that every other lucrative sport attracts.

Winning a dull, irrelevant competition that doesn’t register on the big money scene, does not make a team a beacon of goodness in a sea of sport corruption.

Thanks Crikey. This deserves more attention than it is getting. Injecting mega-bucks into (mens) sport has meant poor outcomes for our sporting values (drugs, bad behaviour and egos). As you say, these women do an amazing job for next to no money. All power to them.

What “sport” used to mean?

… before it grew horns, a tail, a milking stool, wealthy “milk-hands” and all those other dependents?

Meg: paying attention to women’s sport is probably the best way of reducing the gender disparity. And reducing inequality – as well as encouraging wider participation in sports – seem merit-worthy goals to me.