The Union is fine, the Republicans not so much

President Obama's State of the Union address set out some ambitious progressive reforms, while the Republicans scatter and filibuster as they work out which battles to fight. Crikey takes the political pulse of the US. 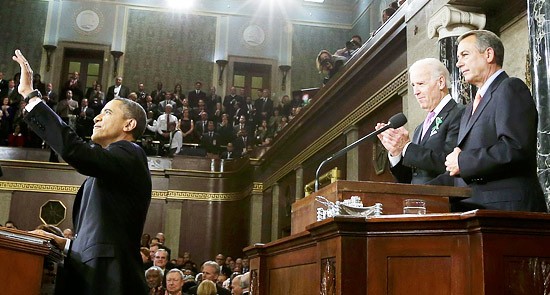 The phony war in US politics is over, with President Obama proposing a sweeping liberal agenda in the 2013 State of the Union address, in the same week as the Republican Party filibustered the appointment of the nominee for Defense Secretary, Chuck Hagel.

Both moves were heartfelt, but they were also directed at their immediate political effect. Team Obama’s liberal program of raising the minimum wage by 20% to $9 an hour, funding for universal pre-school education and development, changes to Medicare funding etc, are squarely aimed at a Republican House which will reject them, and put them in the spotlight.

The GOP Senate team’s rejection of Hagel, a former Republican senator, was ostensibly aimed at bullying Obama into releasing more information on the Benghazi attack and opposing a figure many claim to be anti-Israel — but it was also about defending the notion of the filibuster itself and landing a blow, any blow on a resurgent post-electoral administration.

For those who wondered whether there was going to be a second-term agenda for the Obama administration, this was it — a laundry list of initiatives large and small that pushed the core progressive liberal US idea that the government should act in concert with the market and civil society to develop the general welfare, rather than being regarded as some sort of political chemotherapy, a necessary evil to be tolerated in the minimum amount.

Explicitly rejecting austerity politics, Obama noted that the current setting of the minimum wage at $7.25 puts the full-time US worker with two kids below the poverty rate and proposed the basic principle that no full-time worker should be in poverty. That was yoked to the idea that higher wages would increase purchasing power and a “fix-it first” drive to repair US infrastructure (70,000 dilapidated bridges being the biggest issue). Centres of high-tech manufacturing excellence were proposed, plus a transfer system whereby oil and gas royalties would pay for transition to low-carbon energy supply and technology changeover.

So it was a standard mild social democratic programme, drawing influences from New Labour, Rudd ALP and other places — but in the context of US politics, and together with gun and voting reform, screaming socialism. It earned not one but two Republican rebuttals — the official one from Senator Marco Rubio, and a “libertarian” one from Rand Paul.

It’s a measure of how Right-shifted the GOP is that Rubio, a Tea Party favourite and climate-change denialist who has toyed with “young earth” creationism, is the mainstream voice while Paul was the dissident. Rubio trotted out the usual mantra about government getting out of the way and letting the market do its thing (such as not restoring common but essential infrastructure, like bridges), while Paul paid lip service to his father’s anti-imperialism by criticising military spending, but had no real guts in opposing the Obama drone wars and cross-border projection of power on a massive scale.

The split represents the chaotic nature of the Republicans. The Tea Party has been all but stood down — once the money stopped flowing from DC think tanks and fundraising outfits, they became little more than social clubs for ageing grumblers. Paul and other Paulites are filling the vacuum — a prospect so worrying to the GOP organisation that the irrepressible Karl Rove has created the Conservative Victory Project whose aim is to oppose “fringe” candidates in primaries.

That is, in part, the target for Obama’s program. Pushing the House leadership to oppose minimum wage rises and the like will put enormous pressure on speaker John Boehner and others. Usually, with a non-Westminster-style Parliament, the House could wave through huge amounts of presidential legislation — and then oppose it, if it didn’t work, in the next election. But Boehner is under threat from his own Right, so has no room to move.

How much of his actual agenda Obama can get through remains to be seen. Some of the initiatives can be started through executive orders, but I can’t see the GOP waving through any movement in the minimum wage whatsoever. One way or other, they remain in the headlights, and the filibuster of the Hagel appointment was an attempt to get out from under this, albeit a fairly desperate one.

Hagel was a mildly dissenting Nebraska senator, one of the first to do a mea culpa on the Iraq war, Gitmo and other matters, and a persistent critic of the Israel lobby and its role in US politics. For that last position he has been found embarrassing by many Republicans, but Nebraska often elects conservative Democrats, so anyone who can hold it gets a free pass.

Team Obama’s nomination of him was another political wedge — after all the accusations that he had no interest in bipartisanship, Obama chose one of the few Republicans the GOP definitely didn’t want in Defense. Though four GOP Senators broke ranks on filibustering, it wasn’t enough to get Hagel through. Filibustering a cabinet nominee is a first, and puts the GOP in a groucho position — they care so much about Defense that they wouldn’t have anyone like themselves in the role. It’s a piquant piece of absurdity, made all the more ridiculous by the fact that a handful of senators have already said they’ll confirm Hagel when the filibuster expires in 10 days.

Coming up is yet another vote on the debt ceiling, which was deferred, as were the cuts and tax rises necessary to avoid the “sequester” of billions in government programs. The Right of the Republican party are looking forward to this series of grudge-matches, as are the Democrats who win either way.

The “mainstream” of the Republicans, by contrast, are in a lose-lose situation, and the ultimate result will most likely be a challenge to Speaker John Boehner and a further-Right push by to take over the party apparatus. The union is strong; the Republicans are coming apart at the seams.

Rundle: Obama has no hope of achieving his agenda, so why is he smiling?

Who’ll win Congress, and the other big races?

Thanx for this good news and analysis. I gather that Obama may even get some of his program implemented while setting up the Democrats nicely for the mid term elections.

I hope filibuster reform brings back the requirement to continually speak. There is something heroic/pathetic (depending on your view of the relevant legislation)about a Senator talking non-stop for hours to prevent a vote. Makes for much better television than the current milquetoast method.

Strom Thurmond, Civil Rights Act 1957, now THAT was a filibuster! And he was still a Dixiecrat then, raging against the Republican Bill.

The irony of Karl Rove having to put wooden stakes through the zombie Tea Pot (crack pot?) brigades is comedy gold. Murdoch and Ailes nurtured this septic infection in the GOP and it now looks resistant to easy cure and continues to fester, more slowly perhaps, but persistently.

There just may be a god.

I can see why Murdoch is so desperate to topple Gillard. If She manages to win the Oz election, I can just imagine Abbott and his boys running around like rabid Republicans, without a clue.