Evidence from last year's US presidential election showed a strong increase in the use of negative and angry political advertising. Will the same thing happen in Australia this year?

Negative, angry and ubiquitous: political advertising to come? I hope there’s no truth in those stories I’ve read about our major political parties being in the United States picking up tactical tips during the last presidential campaign. That the prospect of being forced to sit through a barrage of American style advertising is not a happy one is clear from a recently published studies from the Wesleyan Media Project.

The full analysis of last year’s political advertising is behind a paywall but one of the authors has given details on the blog of the foundation that financed the work under the heading “2012 election crushes records for campaign advertising.” Some extracts from what the authors described as a “negative, angry and ubiquitous” approach:

“More than 3 million campaign ads costing almost $2 billion aired in federal races in the 2012 elections, but aside from sheer volume, 2012 will also likely be remembered for its record-setting negativity: Three-quarters of all ads in the presidential race appealed to anger. Outside groups, such as super PACs, participated in record numbers this year, while the influence of political parties declined dramatically. Overall, a tremendous volume of advertising bombarded voters in a very small number of media markets, yet the results were essentially the status quo. 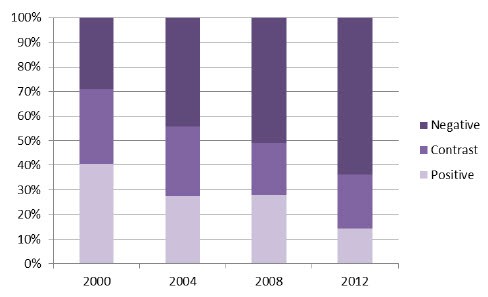 “Consistent with anecdotal reports, the 2012 campaign ad battle was historically negative, with fully 64% of ads aired between June 1 and election day being purely negative (only mentioning an opponent). Moreover, three in four ads aired during the presidential general election made an appeal to anger. Other top emotional appeals were to fear, enthusiasm, sadness and pride.

“Despite the emergence of new and more sophisticated means of reaching voters through the internet, the 2012 campaign clearly played out on television airwaves.”

Australia-Israel relations take a turn for the worse. Jerusalem, The Jerusalem Post reported yesterday, is not anticipating that what it calls “the incident” involving the death of 34-year-old Ben Zygier “will create any diplomatic tension with Canberra”. No diplomatic tension maybe, but a significant undermining of a broader Australian political support for Israel there certainly will be.

A weakening in an almost unconditional support by Australian governments of all complexions for Israel since that country’s foundation has been noticeable since an investigation found Israeli authorities used Australian passports in an assassination plot in 2010.

“This did not require a slap on the wrist. This required a firm statement by Australia about our sovereignty … If we weren’t prepared to take firm action against this background, what price do you put on sovereignty?”

“In 2006 an agreement was entered into between an Australian agency and an Israeli agency about how things would be conducted … Against that background earlier this year, Israel again misused Australian passports in the most flagrant and blatant of ways … We are entitled to have our own national interest, and unfortunately in this case a firm friend, a very good friend, did not abide by the principles of friendship.”

The case of Zygier and the reason for his imprisonment under an assumed name in a high security Israeli jail are still shrouded in secrecy but it appears that his possession of Australian citizenship was a reason for his involvement with Israel’s security service. And it is clear that any agreement “between an Australian agency and an Israeli agency about how things would be conducted” was completely outside the use of normal diplomatic channels.

This was not a matter of diplomats exchanging information that could be passed on to politicians but of one lot of spooks telling secrets to another lot of spooks with the public of both countries definitely to be kept in ignorance.

The ABC’s Foreign Correspondent program, to its great credit, has broken the silence.

That program’s disclosures will reinforce the growing sentiment within the Australian Labor Party that believes Australia should no longer slavishly support Israel in forums like the United Nations that saw Prime Minister Julia Gillard rebuffed recently by her colleagues on a minor UN resolution about Palestine.

I thought I sniffed bullshit in that first article linked to by RF on disposable v reusable shopping bags and surprise surprise; it was bullshit. I note that his link to the rebuttal contained no editorialising unlike the initial work in the Crikey of the 8th of this month. If you ever see a ‘scientific’ paper with a gap in a graph like that save yourself the bother of reading the rest of it; its crap.

It’s pretty evident that this work was just a bit of liberal bashing pseudo-science where they have started with the conclusion they wanted and worked backwards to it.

It’s pretty evident that this work was just a bit of liberal bashing puesdo-science where they have started with the conculsion they wanted and worked backwards to it.

Re. advertising – the big difference here is compulsory voting.