Gratts back at Fairfax. What do you do when your star press gallery columnist leaves for academia and to write for a fresh online start-up publication? Why you republish their work free of charge, of course. Ex-Fairfax grandee Michelle Grattan has already begun churning out the commentary for her new overlords at The Conversation, which offers […]

Gratts back at Fairfax. What do you do when your star press gallery columnist leaves for academia and to write for a fresh online start-up publication? Why you republish their work free of charge, of course. Ex-Fairfax grandee Michelle Grattan has already begun churning out the commentary for her new overlords at The Conversation, which offers up its copy to content-starved outlets free for republication under a creative commons licence.

And wadd’ya know, her former editors have already begun cashing in on The Convo‘s generosity, with a classic piece of Cobber analysis appearing online at Fairfax today. Cheeky. And as a couple of wags have noted, a little bit incomplete. The Conversation‘s version of the piece is full of links to most major publications, while Fairfax has chosen to only keep the links to itself. That’s not how the internet works, guys.

Correction of the day. It was a cracking scoop produced in the midst of a corruption inquiry described as the “blackest day in Australian sport”. It’s just a pity the number was wrong. Crikey‘s The Power Index recently named them our third most powerful journalists, but we gotta say The Age‘s Nick McKenzie and Richard Baker may have lost some of their lustre this time.

In a big front-page splash in last week’s The Saturday Age, Australia’s Woodward and Bernstein quoted a former FIFA executive’s claim that $49 million was bet with a Hong Kong bookmaker on a round 10 A-League fixture between Adelaide United and Melbourne Victory in December. That was more than the amount gambled on the recent Manchester derby, they explained. 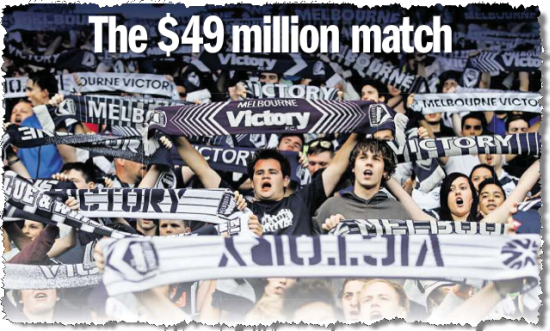 But yesterday, Football Federation Australia released a statement clarifying the amount gambled was more in the “vicinity of $A5 million”. The $49 million dollar figure was actually the take calculated in Hong Kong Dollars, the league stated. Cue a “clarification” in today’s paper: 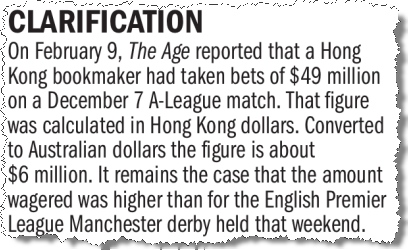 Front page of the day. A big story is developing in South Africa, after double amputee track sprint star Oscar Pistorius was charged by police with murdering his girlfriend. Here’s the Cape Argus front page: 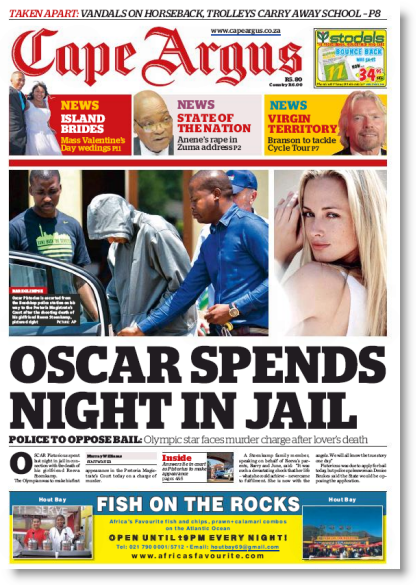 Meanwhile, the Sun wins our “gross front page of the day” award for this knuckle-dragging effort salivating over Pistorius’s dead model girlfriend. Keep it classy guys. 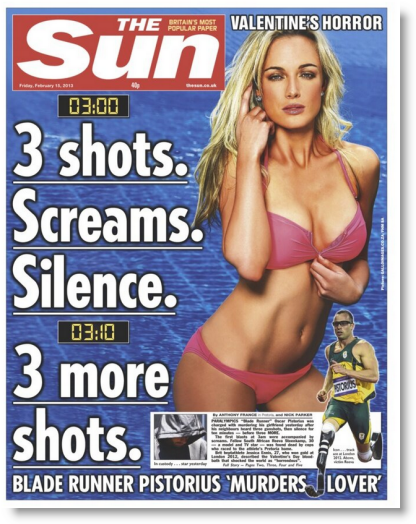 Given that the conversation publishes under a “Creative Commons  - Attribution/No derivatives” license, editing out links online is actually a fairly blatant breach of the license. Luckily it looks like all the links seem to have been put back so it was clearly an accident 🙂