Der Spiegel reports how Katharina Greve originally drew a cartoon about the Pope leaving for the Frankfurter Allgemeine Sonntagszeitung about a year and a half ago. Plus other political news.

How long does a Treasurer’s resolve last? Wayne Swan on Radio National before breakfast when asked several times whether personal income taxes would rise:

“I don’t … go into that sort of rule in rule out routine, and I’m not doing it today.

“What I’ll do is the responsible thing — put in place a strict fiscal policy, make sure that working Australians get a fair go, that there is incentive in the tax system, that we build up their superannuation.

“They’re the sort of things I’ll do, and I’ll leave the speculation for everybody else.”

Wayne Swan in a mid-morning statement:

“The proposition of this question is utterly ridiculous and absurd.

“We delivered cuts to personal incomes taxes in three consecutive budgets worth a total of $47 billion.

“Last year we tripled the tax free threshold, from $6000 to $18,000, removing around one million people from the tax system.”

He really is a man of his word is our Wayne.

Back on page one. It has been a few weeks but talk of a leadership challenge is back on page one of the Sydney Daily Terror. Once again no names no pack drill. Just those wonderful anonymous sources.

“A final showdown,” we are advised by The Terror, “between Julia Gillard and Kevin Rudd could come within weeks, as tensions in the Labor caucus rose yesterday over the leaking of a letter critical of the former PM.”

The Crikey Leadership Indicator still puts the chances of such a coup at just over 40%.

An own brand warning. I’ve been a bit of an own brand purchaser myself but I must say that the European horse meat stories have me rethinking my shopping habits. Most of the offending products seem to be in the generic and supermarket branded products. Inevitable, perhaps, that corners are cut by manufacturers when put under price pressure by oligopolists.

Holy sack of straw! God knew. It’s just that he notifies us in mysterious ways. 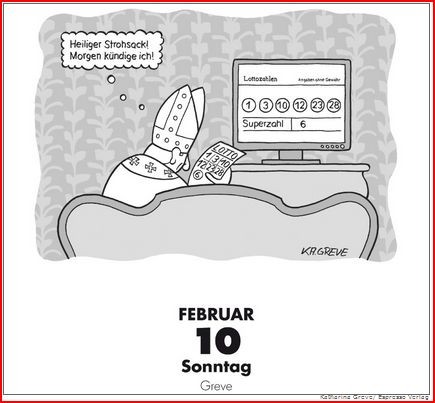 Der Spiegel reports how Katharina Greve originally drew the cartoon above for the Frankfurter Allgemeine Sonntagszeitung about a year and a half ago. It then appeared in the 2013 “Karicartoon” daily page-a-day calendar on Sunday, February 10 — the day before Pope Benedict XVI announced he would step down. In the bubble, Benedict says “Holy sack of straw!,” after realizing he won the lottery. “I’m quitting tomorrow!”