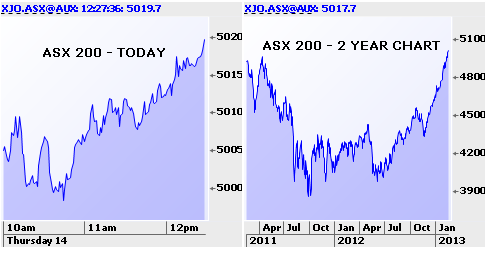 The Dow was up 11 at best and down 73 at worst. President Obama’s State of the Union speech was well received for its attempts to provide long term optimism to Wall St although investors want to see whether the new administration can walk the walk rather than talk the talk. “After years of gruelling recession, our businesses have created over six million new jobs. We buy more American cars than we have in five years, and less foreign oil than we have in 20 years. Our housing market is healing, our stock market is rebounding, and consumers, patients, and homeowners enjoy stronger protections than ever before,” said the President. Following the speech, Republican House Speaker Boehner dismissed President Obama’s call to raise the federal minimum wage to US$9.00 an hour, from its current level of US$7.25 by the end of 2015.

US retail sales grew by 0.1% in January suggesting that there no real initial hit to household spending following the Fiscal Cliff tax hikes. Excluding autos and gas, sales were also up 0.2%, a touch better than expected.