Police have arrested six more journalists out of the News of the World phone-hacking scandal that continues to dog the News Corporation business ahead of its demerger. 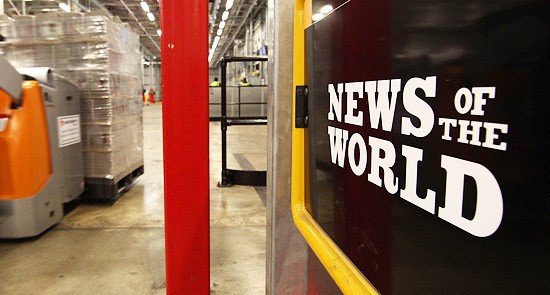 Just when News Corp is back in investors’ good books with the share price soaring ahead of the forthcoming split, the News of the World phone-hacking scandal has emerged from the darkness to remind us all of the essential grubbiness of Murdoch’s London newspapers. UK police have found another phone-hacking trail linked to the defunct Sunday paper. That now makes four separate investigations into activities at Murdoch’s London papers, including the defunct NotW and The Sun.

Six people were arrested across the UK last night, all former NotW journalists, including two rehired to work on The Sun, Murdoch’s big-selling tabloid. It comes as the question of a new regime for regulating British newspapers moves to a critical stage, with many Conservative politicians trying to avoid the formal legislation-based system called for by Lord Leveson in his report into phone hacking and political influence.

The string of arrests brings to 106 the number of people arrested in the police investigations into activities at the papers. On Tuesday the 100th person was arrested when a serving police officer was detained by police working for the Operation Elveden probe, which is examining claims of improper payments to public officials by journalists on The Sun. Six other people have been arrested and questioned and later told they were no longer of interest to the investigations.

According to London media reports, the new conspiracy took place in 2005 and 2006 and is separate to the phone-hacking allegations being investigated by London police in Operation Weeting, which is one of three separate probes examining phone-hacking, computer and mobile phone-hacking and illegal payments to public officials by journalists on The Sun and the NotW.

The arrests came as News International moves to wrap up its internal compensation process for people who found they were hacked in the original case. Last Friday the company said 144 civil damages court action cases had been settled (including Hugh Grant and Sarah Ferguson). Seven will go to trial later in the year and 20 are still being negotiated. News is understood to have been notified in a total of 701 claims since the first action was launched by Sienna Miller back in 2010, but not all victims are going through the High Court. Around 250 other cases have been settled through the £20 million compensation scheme the company set up (News now says that will be shut down in April).

News International confirmed two of the six people arrested have since been hired by The Sun and Mike Darcey, chief executive of NI, sent an internal memo to staff at the tabloid confirming the arrests of their colleagues and saying he “shared their concern” about the police action. Darcey said NI was providing legal help for the two employees, according to London media reports.

Many of those arrested seem to confirm that the grand old fart still refuses to acknowledge the disgust that many must hold his red tops and other propagaters of his self serving demented ideology.
He should team up with Palmer’s latest venture into the rebuilding of the Titanic, as he is an expert and shuffling deck chairs, evdenced by his moving of staff.
One wonders whether his surrogate daughter Rebekah Brookes still enjoys his shareholders’ largesse in the form of inner London Offices and a chauffer driven Benz together with the odd boat trip on Lachlan’s yacht.