Six more arrests over phone-hacking. UK police have found another phone-hacking trail linked to the News of the World. Six people were arrested across the UK last night, all former NotW journalists, including two rehired to work on The Sun, Murdoch’s big-selling tabloid. That now makes four separate investigations into activities at Murdoch’s London papers, including the defunct NotW and The Sun.

The string of arrests brings to 106 the number of people arrested in the police investigations into activities at the papers. On Tuesday the 100th person was arrested when a serving police officer was detained by police working for the Operation Elveden probe, which is examining claims of improper payments to public officials by journalists on The Sun. Six other people have been arrested and questioned and later told they were no longer of interest to the investigations.

According to London media reports, the new conspiracy took place in 2005 and 2006 and is separate to the phone-hacking allegations being investigated by London police in Operation Weeting, which is one of three separate probes examining phone-hacking, computer and mobile phone-hacking and illegal payments to public officials by journalists on The Sun and the NotW.

The arrests came as News International moves to wrap up its internal compensation process for people who found they were hacked in the original case. Last Friday the company said 144 civil damages court action cases had been settled (including Hugh Grant and Sarah Ferguson). Seven will go to trial later in the year and 20 are still being negotiated. News is understood to have been notified in a total of 701 claims since the first action was launched by Sienna Miller back in 2010, but not all victims are going through the High Court. Around 250 other cases have been settled through the 20 million pound compensation scheme the company set up (News now says that will be shut down in April).

Mike Darcey, chief executive of NI, sent an internal memo to staff at the tabloid confirming the arrests of their colleagues and saying he “shared their concern” about the police action. Darcey said NI was providing legal help for the two employees, according to London media reports. — Glenn Dyer

Time Warner sells mags? Time Warner, America’s biggest magazine group, is reported to be in talks that could see it sell out of the sector complete, or substantially reduce its involvement. Time Inc title Fortune reported this morning the group is thinking of selling major titles such as People, InStyle and Real Simple to an unknown buyer. Time would retain its key magazines: Time, Fortune and Sports Illustrated.

The news comes 10 days after the company revealed a cost-cutting program designed to lose 500 jobs (6% of its workforce) and save $US100 million. It also comes six days after circulation figures showed the magazine lost a massive 23.2% of its news stand sales in the second half of last year, which left total circulation little changed at 3.28 million a week. People lost 12.2% of its sales in the same period, but lifted subscriptions more than 8%. The loss of sales for People and Time in particular contributed to a 7% fall in fourth-quarter revenues for Time Inc to $US967 million.

Fortune said Time Warner is negotiating with a single “serious buyer” who might take all the magazines or buy some titles. Time Inc only accounted for 12% of Time Warner’s total revenues of more than $US28 billion in 2012. Fortune also pointed out the split, either partial or total, mimics the one planned by Rupert Murdoch at News Corp between its content and broadcast distribution businesses. — Glenn Dyer

Front page of the day. The huge story involving an Israeli-Australian citizen who hung himself in his cell has finally made Israel news after the state partially lifted its gag on the issue: 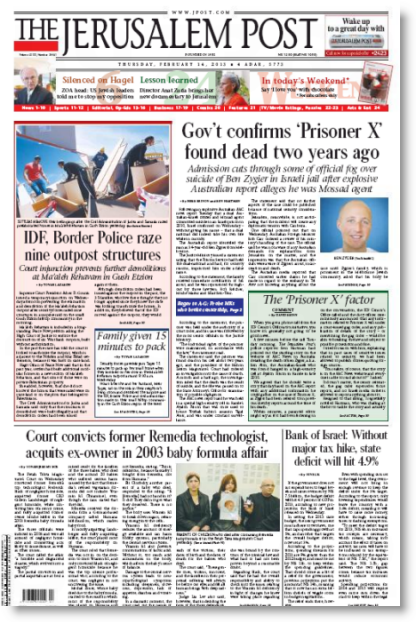 That “(NotW) string” is starting to look like that ball of wool in the Newsom/Victorian Tourism ad?

[“… And you can ask the councilor;
you can ask The King;
and they’ll say the same thing.
And that’s a funny thing…”?]