Pope Benedict's resignation is about much more than declining health. This is a Machiavellian power struggle more riveting than any soap opera, writes Vatican watcher Michael Hewitt-Gleeson. 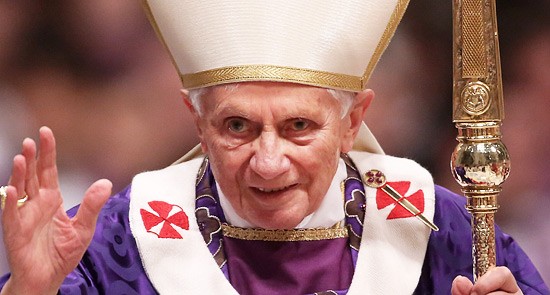 The commentary on the Pope’s resignation seems to be largely ill-informed, naive or perhaps both. One newspaper’s online cover story even featured a 12-second video of lightning striking St Peter’s in Rome shortly after the Pope’s announcement. The point being …?

As more than 1000 years of well-documented history shows, in the salons of the Vatican, it is always about their infamous libido dominandi, their insatiable lust for power. Think The West Wing meets The Da Vinci Code meets The Borgias. Where power corrupts and absolute power corrupts absolutely. There is secrecy and blackmail, power and survival, s-x and r-pe, bribery and murder — contrasted with brilliance, virtuosity, bravery, humanity and love. What a story!

This is high human Machiavellian drama played out by sophisticated princes (there are no princesses), pampered and refined in sumptuous Baroque gem-encrusted costumery, gold-plated chalices, priceless art collections and all the trappings of fabulous wealth. Canberra politics seems to lack a certain lustre by comparison.

In modern history, since Mussolini gave Pope Pius XII the Vatican (some buildings and gardens and even a stunning marble-encrusted private railway station), it has operated as a sovereign state with its own elected sovereign, its government, its laws, its famous Swiss army, its infamous bank and its international diplomatic corps with which Australia swaps residential diplomats.

The key insight, that few commentators seem to understand, is that there are two separate and historically rival entities in the Vatican: The Holy See and The Roman Curia. The Holy See is the office of the Pope. The Roman Curia is the government ministries and the bureaucracy which also controls the cash. Think of the deep rivalry between the White House and Capitol Hill in The West Wing and you begin to get the idea.

If you connect the recent dots, there’s a power struggle going on (as usual) between the Roman Curia and the Holy See. The Curia is led by Cardinal Tarcisio Bertone who is backed by the Salesians (the fastest growing order in the church and on an ascending path for consolidating its power). Bertone is Secretary of State and also the Camerlengo which means he controls the Curia and will run the church when the Pope becomes too old or too ill to do his job. He would then, in effect, be the de facto pope. Papal doctors could keep an ailing pope alive for ten years which means that Bertone could run the church for a decade before the pope finally dies and there is an election. This is a very tempting and powerful proposition to an ambitious Roman prince. Bertone is the Pope’s nemesis in the Vatican.

Pope Benedict (who as Cardinal Ratzinger himself ran the church when pope John Paul II was too old) knows exactly what this means and has been trying to thwart Bertone’s stalking grab for power. The recent Vatileaks episode was evidence of all this. It was all about the Pope’s loyal butler trying to stave off Bertone and trying to protect his master, but Bertone got him anyway.

So we are left with an aging Pope, a virtual prisoner of The Holy See, running out of personal protectors, who has only one move left to keep The Holy See from the hands of Bertone and the Roman Curia. He can put the future of the church back into the hands of the College of Cardinals … by resigning! Checkmate.

“A clever, courageous, strategic and game-changing move from an old and embattled man to protect his Chair of Peter from those who would covet its power.”

Benedict has warned his Vatican nemesis of this for at least a couple of years. Rome’s diplomatic corps was abuzz with this in 2010. Former Australian ambassador to The Holy See, Tim Fischer, has referred to the fact of rumours of resignation in his own recent commentaries.

Maybe Bertone and co thought the Pontiff was bluffing. Anyway, he’s made his move. A clever, courageous, strategic and game-changing move from an old and embattled man to protect his Chair of Peter from those who would covet its power.

Everything now depends on the new pope. Bertone won’t get it but will be trying to get “his man” elected. We can assume that Ratzinger will be trying to get one of his men to succeed him. That’s where George Pell of Australia might have a chance as he is one of the Pope’s loyal men. But there are other powerful factions who now have a chance, too. Brazil is one of the biggest Catholic countries, a rich and powerful country with a growing economy and the site of the next Olympic Games. Africa or Asia are also growth areas for the church. The Italians haven’t had a pope for a while and Berlusconi can not only buy an election but he can probably buy a papacy. It wouldn’t be the first time The Holy See has been bought by a political leader.

Or, even an outlier. A “good” pope; in the tradition of a John XXIII. Imagine if the cardinals elected a pope with an impeccable scandal-free record in the handling of child r-pe. One who had the gravitas and the vision to heal the church of its current crimes. This could capture the imagination, not only of the “people of God”, but also of the entire world which has watched this sordid episode in long-suffering dismay.

In this new game-change there will be lots of potential opportunities and unexpected consequences. For example, after the election there will be a big new problem: two popes.

This means the church is vulnerable to a split. For example, if ultra-conservatives don’t like the new man (especially a “good pope”) they can refuse to recognise him and say they still believe Benedict is the real pope. And vice versa. This has happened many times before in history.

Forget The Bold and the Beautiful and stay tuned. It’s a fascinating and unfolding story urbi et orbi with something for everyone.

Thankyou, so the plot thickens! like any form of politics money corrupts, ethics/morality/humanity, an easy conclusion when I have no belief in the Christian myth so no need to function with cognitive dissonance.

I add my thanx for this piece which I likewise found most informative.

Thank you for a very interesting and informative post. I hope a ‘Good Pope’ gets up.

Enlightening! I am an ex-Catholic and now an agnostic, but I would be appalled if Pell became Pope.That said there are probably others who might be worse.
Hoping the church and religion generally sinks into irrelevance.