‘Every day I am dying here’: how asylum seekers turn to smugglers

Journalists Andrew Dodd and Christine Horn went to Indonesia to see how people smugglers operate. In part two of their investigation, the cost and complexity of the boat journey to Australia. 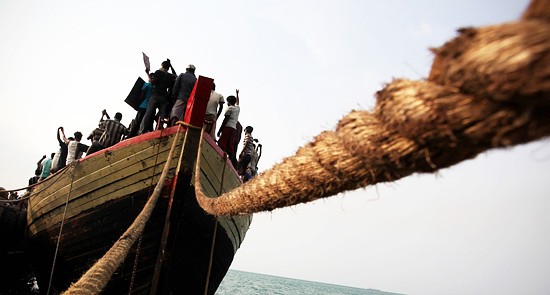 Australian politicians love talking about “smashing” the people smuggler business model. It is strange then that very few of us know how the business really works.

In Indonesia, after meeting those in the camps, we attempted to learn about the way people smugglers operate and how it is the supply of boats hasn’t stopped. We spoke to about 50 people, many of whom were potential passengers. We have not named them for their protection, but this is what they told us.

First, very few people use the term “people smuggler”. The word used by Hazaras — the most prominent group of asylum seekers in Indonesia — is “qachaqbar” (pronounced gohchuckbar). By one estimate, there might be as few as 10 qachaqbars operating across the whole of the Indonesian archipelago. They are mysterious figures; no one knows their identity and people talk about them with a mixture of fear and respect, a bit like the head of a crime family.

Qachaqbars have complex organisations beneath them to handle the many facets of the business. One department recruits and manages passengers; another sources and crews the boats and transports the passengers to the Indonesian ports of disembarkation; a third manages the complex finances. Each department is hierarchical in order to protect the identity of the qachaqbar, who operates several phones and uses many different names.

Directly beneath the qachaqbar is an agent, who does most of the logistical work. He co-ordinates the boats, monitors demand and keeps in regular contact with the people under him. The people in the next tier down are known as “sargroups” and act as local recruiters. They fit neatly into the community and sign up new passengers from amongst their friends and from the asylum seekers who arrive in Indonesia. They are the only people associated with the syndicate who are known to the passengers and they themselves only know the current alias and phone number of the agent. The sargroups only deal with the agent and never learn the identity of the qachaqbar. Like the qachaqbar, the agent regularly changes his phone and name to avoid detection.

Once a sargroup has recruited his quota of passengers he waits until the signal arrives from the agent that a boat is ready. The sargroup will then activate a phone tree to let the passengers know when and where to meet. The passengers are collected and taken to a staging point close to the port before finally boarding a boat bound for Australia. At that stage the passengers will surrender their phones.

In Jakarta we visited a small guesthouse where we heard that asylum seekers were staying. The manager told us we were too late: two Afghans had checked out that morning because they were leaving to catch a boat from southern Java. He said many refugees came through the hotel and travelled south to Bogor and from there down to the coast where they boarded boats. In surrounding hotels we met others who were guarded about their plans. Some denied they were in contact with people smugglers, others were happy to admit it.

“By the end of the exercise he would be $66,500 in debt. He had no idea where he would find the money and no idea how he would repay it.”

In the town of Cisarua in West Java, where many of the Hazara live, we met several more who were waiting for the phone call to tell them their boat was ready. They told us recent Australian policy changes were no deterrent. Many of the people we met knew about the re-opening of Manus and Nauru but that wasn’t putting them off. The greatest deterrent was the cost. As one person told us: “Ninty-five per cent of the people here would go by boat if they could find the money.”

But that is not easy. The costs can be exorbitant. In Jakarta we met a man who was happy to share the details of his expenses. We drew a map with a circle for Iran, where he had left with his wife and children, another circle for Turkey, where his family is now waiting in a rented apartment. We drew a third circle for Indonesia, where he has been for several months, attempting to gain refugee status. And finally we drew a circle for Australia, where his brother already lives and where he wants to go with the rest of his family. Then we joined the circles with arrows and against each we added the cost for each leg of the journey.

By the end of the exercise, with the whole family reunited in Australia, he would be $66,500 in debt. He had no idea where he would find the money and no idea how he would repay it. His situation seemed hopeless.

It is easy to assume that refugees just front up at a dock and hand over a wad of cash as they walk up the gangway to board a boat. But this is nothing like the way it’s done. The process of paying people smugglers is complex. It is based on a system of checks and balances which, surprisingly, are designed to ensure fairness for the passenger.

When a sargroup has recruited a potential new passenger, he makes telephone contact with the next person up the chain of command, the agent. The agent makes a record of the potential passenger’s details and advises the sargroup to instruct the passenger to arrange for a family member to make the $US4000-7000 payment to a designated money dealer in Kabul, Quetta or Tehran — depending on where the passenger’s family is based.The passenger then contacts his family, usually by phone. If the family can raise the money it then makes an appointment to see the designated money dealer. The money dealer then calls in the qachaqbar’s local representative and the three parties meet. A deed is drawn up and the family hands over the money to the money dealer who holds it in trust, for a fee, until the passenger has arrived in Australia. The family is given a number. The family passes the number on to the passenger in Indonesia, who in turn contacts the sargroup and quotes the number to confirm that the money has been paid.

The process of lodging the money with the dealer is known as “blocking”. If an asylum seeker has not blocked his money they can’t travel.

When a passenger arrives in Australia and is intercepted and taken to a detention centre, he is allowed to make a call home. This call is sometimes called the “alive call”. It triggers the next step, in which the three parties all meet again and the money dealer hands the money over to the qachaqbar’s local representative and the transaction is completed.

“What became apparent is that the supply of boats barely meets the demand, and the demand has been significantly increased by Australian policies …”

Of course many passengers never arrive. In the past year there have been countless drownings at sea. Hundreds of people have been lost as boats have sunk, sometimes without trace. We were surprised to learn that there is honour in the transactions and a process for returning money in these situations. Once it becomes apparent that a passenger is dead the family can unblock the money and it will be returned. Passengers who change their mind and opt not to travel by sea can also get their money back, as can asylum seekers who decide to travel with another qachaqbar.

In Cisarua we met a man who confirmed this. Tragically, his brother and sister-in-law were lost at sea when their boat capsized in August last year. After three months and no news — and corroboration that none of the others on board had arrived either — the family was able to get its money back. He has since decided not to travel by boat and is waiting in the hope that the Australian government will accept him.

In Jakarta we asked a group of asylum seekers whether they knew people who had drowned. They all said yes and began telling us about friends who had died in the last few months. We wrote down their names: Hamidulla, Ali Naqi, Enayatulla, Taqi, Gashtain, Sharif, Kabir, Ghulam Ali, Ahmad, Ali Reza, Khalil, Shukrulla …

Despite this, the pressures to take boats are immense. As one asylum seeker told us: “If everyone could find the money, they would block it. We never go back to our country because our life is in danger. Nauru or Manus are not the issue. Every day I am dying here, so many mental pressures. I would rather die once in the water.”

We went to Indonesia to see how people smugglers operate. What became apparent is that the supply of boats barely meets the demand, and the demand has been significantly increased by Australian policies that have forced asylum seekers to wait almost indefinitely in Indonesia.

Asylum seekers told us they will somehow cope with the costs and many will overcome their fears of the sea. They told us Nauru and Manus Island are not deterrents. They feel that they have been forced to get on to boats because they’ve had no hope of being accepted and resettled through the official channels.

An interesting book to read on this is ‘The People Smuggler’ by Robin de Crespigny about Ali Al Jenabi who fled Iraq and then set up as a ‘boat facilitator’ in Indonesia in order to get his family out of Iraq and to Australia. He was caught by the AFP in Bangkok, has spent time in Aussie prisons and I understand the Department of Immigration is still intending to deport him when Iraq is ‘safe’, despite the fact that the rest of his family is here. The book gives good insights into how boat travel is organised in Indonesia.

Thanks JMNO, I wonder what possesses the Crikey team to repeat what has been known for over a decade and pretend it is news.

There have been documentaries, reports, investigations and books written about the facts in Indonesia going back to the children not thrown enquiry.

It is perfectly legal for these people to pay whoever they can find to help them, why pretend otherwise and help criminalise seeking asylum.

I wonder what possesses @shepherdmarilyn to repaetedly post pointless, critical comments that add nothing to the discussion.
I for one have never heard detials like this before, nor read anything like it in any Australian media outlet. It’s not news, it’s information. Facts about the refugee situation and the business of people smuggling in Indonesia. Facts that more people should be aware of before demonising those who’s only crime is wanting to live in Australia.
The real news here is that an Australian Government genuinely interesting in “stopping the boats” or “smashing the people sumgglers’ business model” should have been able to do so at little cost and with a small amount of assistance from Indonesia’s Government.
Matt.