Happy birthday to us, but no time for a cake. We go to Indonesia to delve into people smuggling. FOIing the government's secretive data retention plans. Inside the battle for the Vatican (like The West Wing with better outfits). And we referee the latest Australian v ABC stoush. 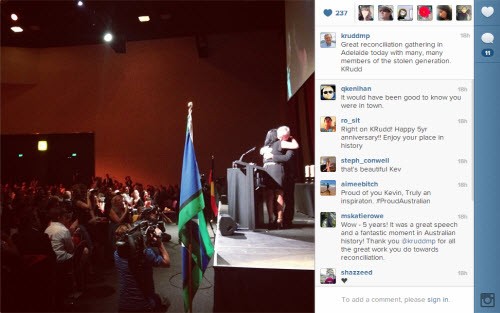 February 13, 8.55am: Interview with Hayley Pearson and Angus O’Loughlin on SA FM in Adelaide (topics: apology, relationship with Julia Gillard, federal election). Here’s a summary of the interview from Sentia Media:

“Rudd says he appreciates people’s friendliness around the country but he’s part of a wider Parliamentary Labor team and their challenge is to get the message out in what’s going to be a pretty difficult and bloody election campaign this year. Pearson says KRudd made their Dirt segment yesterday with his singing of Call Me Maybe. Rudd says Therese has reprimanded him for that. Burgo invites Rudd to audition to be a part of Big Brother, The Musical at the Garden of Unearthly Delights by singing Cher’s If I Could Turn Back Time.” 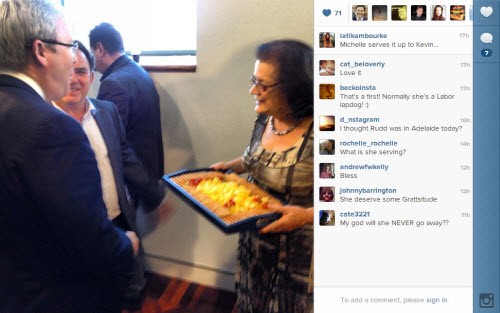 “Hughsey, I’ve got some advice for you: stay in the shower. Turn that hot tap off. Cold, cold, cold.” (Kevin Rudd on the heat over leadership tensions) 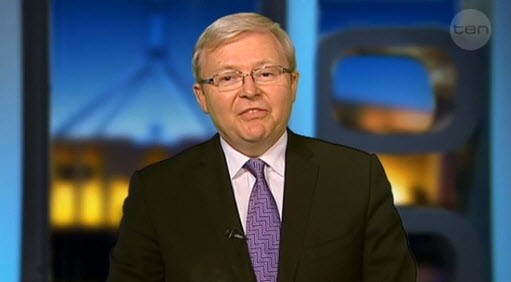 Time for a lie down, K-Rudd.

Crikey turns 13 today (we’re entering those awkward puberty years) but we’re giving you the presents. Today we launch Crikey Perks — your ticket to discount deals, special offers, competitions and exclusive previews. From movies and live performances, music, books and magazines, to food, wine and other treats … it’s your special reward for subscribing and being part of the Crikey crew. Tell your friends.

I was on a plane sitting just behind KRudd in the Kevin07 days. He was last on board with a lackey. Thing I remember most was that KRudd was cool as a cucumber sitting peacefully however the lackey was sweating like a you-know-what and frantically working on papers in a large portfolio case. Don’t know the ins & outs but the lackey looked like he was about to have a stroke. I would not like to be keeping company with KRudd.