The warnings or not on the mining tax

Don’t say you weren’t warned. It’s not on any public  record I have seen, what Julia Gillard and Wayne Swan were advised by Ken Henry that the revenue would be from their revised, mining company-friendly, mining profits tax. But as a retired Treasury secretary he certainly gave a clear advance warning that the Minerals Resource Rent […]

Don’t say you weren’t warned. It’s not on any public  record I have seen, what Julia Gillard and Wayne Swan were advised by Ken Henry that the revenue would be from their revised, mining company-friendly, mining profits tax. But as a retired Treasury secretary he certainly gave a clear advance warning that the Minerals Resource Rent Tax (MRRT) was not going to be some kind of budget saviour.

Here’s a report from the ABC’s PM program on July 16 last year where Dr Henry, speaking at a tax forum in Canberra, gave a rare insight into what he thought of the MRRT’s fund-raising potential:

LEXI METHERELL: Unshackled from the constraints of the public service, Ken Henry is now more free to speak his mind. But the former treasury secretary’s still not prepared to reveal all on the subject of the mining tax.

KEN HENRY: I’ll say a couple of things about it; obviously I won’t say everything I think about it. (Laughter)

LEXI METHERELL: The tax was one of the results of 18 months of work by Ken Henry and others on what became known as the Henry Tax Review. But the review’s original proposal for a Resource Super Profits Tax was morphed into the Minerals Resource Rent Tax under Prime Minister Julia Gillard, after an anti-mining tax campaign contributed to the downfall of her predecessor Kevin Rudd. At a tax reform at the Australian National University, Ken Henry indicated he’s not impressed.

KEN HENRY: It is probably true that the original proposal was too complex for the public to understand. But there’s no way the public can possibly understand what has actually been legislated either. Indeed it’s actually more complicated than what was originally proposed.

LEXI METHERELL: He even questioned whether what’s in place now is actually worthwhile.

KEN HENRY: I mean the obvious question it raises is one that I dare not ask really, which is whether it’s worth bothering at all.

Seven months further on and it’s not the question that dare not be asked but the obvious answer that the great negotiators Gillard and Swan dare not give. It’s not worth bothering at all.

Hide those numbers. I was guilty of a few attempts at influencing public opinion myself back in my election campaigning days but I tried to ensure that my little team of manipulators learned from mistakes and did not make them again. Like the time when our supposed Mrs Suburbia, having effectively delivered a good Labor message on talk back radio, promptly answered the phone and greeted a suspicious journalist from the station ringing to check who Mrs Suburbia actually was with a cheery: “ALP headquarters”. Never give your actual number to a talkback station and never use a phone that displays your number at the other end.

To that hard learned advice should now be added: don’t use your office computer to send emails signed by fictitious people. Of, if you do, make sure you are using a virtual private network that disguises your actual location.

Opting for Argo. The market has settled and the betting film buffs have switched from ancient history to modern. Argo is now the firm favourite on the Crikey Best Film Oscar Indicator: 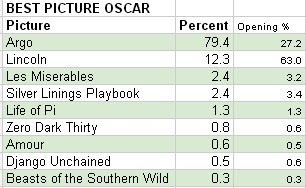