Remember how in June of last year, News Ltd boss Kim Williams bagged the ABC for not being a newsbreaker? Plus other media news of the day.

ABC scoops. Remember in June last year when News Limited boss Kim Williams bagged the ABC for not being a newsbreaker? Speaking on the one-third owned Sky News channel, Williams said the ABC was “misplaced and misconceived in a lot of what it does”. He said while News Limited journalists broke “thousands” of news stories each year, the ABC broke “dozens”: “The ABC is not a newsbreaking organisation other than occasionally on 7.30, occasionally on Four Corners and occasionally on Lateline.”

Well, Kim missed two programs that regularly break stories. Both will be among the major stories of 2013, especially the Foreign Correspondent yarn last night which was sensational. Firstly, take Australian Story on Monday night which cast considerable doubt on the official version (since changed) of the death of a Sydney man, Scott Johnson (and remember the Jeffrey Gilham story that was questioned by Media Watch, which ended up with egg on its face when the NSW Supreme Court looked at new evidence and freed him?). These are only a couple of the substantial stories broken by Australian Story over the years. Both could have easily been looked at and broken by News Ltd papers.

And then there was last night’s episode of Foreign Correspondent, which had an absolute ripper News Ltd and Fairfax Media papers have scrambled to match. It’s the death, in custody, of a young Melbourne man in an Israeli jail in an unexplained way, with a massive cover-up by that country’s government which has forced Israeli media to censor itself.

This is a story that took months of careful checking and cross-checking by the ABC, which, compared to News Ltd, has limited resources. Certainly Foreign Correspondent has nowhere near the budget of The Australian, the Herald Sun or the Daily Telegraph or any other major Australian media publication or program (60 Minutes on Nine and Sunday Night on Seven). The Foreign Correspondent story made Sunday Night‘s interview with James Packer look just like it was: a fawning, soft effort that was not designed to elicit anything substantial. — Glenn Dyer

Video of the day. President Obama will deliver the State of the Union to Congress this afternoon at 1pm (AEDT). Over at whitehouse.gov, there will be a special “enhanced” version of the speech complete with charts, graphs and data. Here’s a sneak preview: 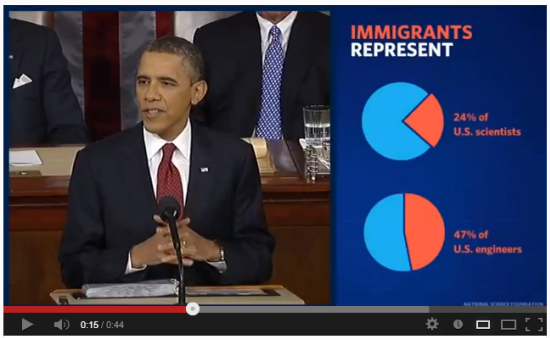 Front page of the day. ICAC continues to be the only game in Sydney town, with Ian “Sir Lunch-a-lot” Macdonald finally appearing on the stand yesterday to answer allegations of corruption. And when Geoffrey Watson SC sensationally branded the disgraced former mining minister a “crook” over helping Eddie Obeid make millions, the Daily Telegraph (and everyone else) had its grab. 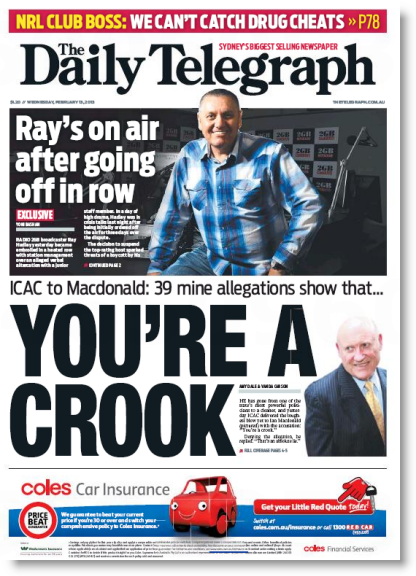 Re ABC scoops Kim Williams meant thet the ABC has no scoops on the latest outcomes on Big Brother, the numerous cooking show winners, and the lastest on the Kardashians et al; – a basic fare for News Ltd scoops. The ever dwindling News Ltd sales would attest that people no longer accept mediocre and sh*tty products. If it wasn’t for the sports pages in News Ltd publications there would be no sales at all, even Kim Williams would attest to that.

Williams is right: it restricts a news provider if they invest time and effort checking facts and background. This cumbersome modus operandi leaves less time for breaking more stories.

The ABC could churn out much more ‘stuff’ if they didn’t check facts. News Ltd is a media model of quantity not quality – it’s not possible to be both unless the news provider has an unlimited budget.