Seven pinched James Packer from under Nine's nose. But the blubbering TV confessional last night was nothing for veteran interviewer Mike Willesee to be proud of.

It started weirdly with an inexplicable reference to Mike Willesee’s primary school (which reminded him of the Crown chairman’s annex apparently) and went downhill from there.

Last night’s Sunday Night interview with James Packer may not have plunged the depths of last year’s notorious fireside chat with The Australian‘s Damon Kitney, but Willesee must be scratching his chrome dome about how a planned serious journalistic investigation turned into an insufferable puff piece. 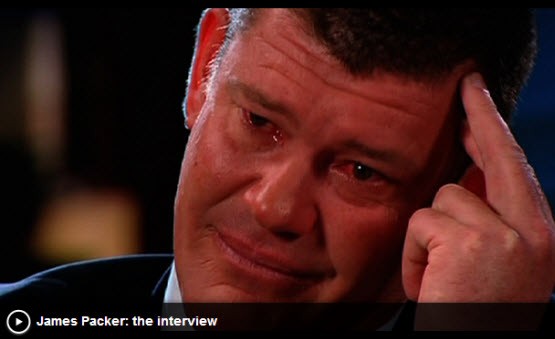 Packer and Kerry Stokes have clearly buried the hatchet following their Broome sojourn last year, and with David Leckie gone (remember the 2009 public sledge?) the floodgates of beneficence have started gushing. Witness the gravitas:

Willesee: “You started, ahh, like all young boys going out with girls … but you were the rich one. How did that affect you finding girls, girls finding you?”

Packer: “I think it helped … hahahahaha.”

One bizarre moment came when Willesee let Packer get away with blaming the Fairfax press for the heat over the disastrous $5 billion One.Tel collapse — not surprising given it was a joint venture with the Murdochs.

Oh, and Packer teared up — not just over his last 2005 conversation with Kerry (“he was a f-ckin big man Mike, a big man”) but over Tom Cruise saving him with Scientology. Mike quickly jumped in to save his blubbering charge: “I don’t want to go into Scientology because this is not the interview to be investigating religions,” he said, before quickly moving on.

The two star-crossed lovers ended it with a hug, a clearly emotional Willesee explaining three of his ribs were “gone”.

Did he cry over any of the people whose lives and families have been wrecked and laid waste by gambling?

What a horrible mental picture that headline gives!

It takes a big man to rob the addicted.