The case of the re-usable killing bags. What is it that bloke Newton said? “To every action there is always an equal and opposite reaction.” And so it invariably happens when the social engineers get engineering. History is littered with harmful unintended consequences of do-gooders attempting to do good. The latest example I have stumbled across is how banning plastic grocery bags is resulting in an increasing number of deaths by food poisoning.

Messrs Jonathan Klick and Joshua D. Wright late last year published in an online journal of the University of  Pennsylvania their study of the impact of the first bag ban in the United States that was imposed by San Francisco County in 2007. What they found was evidence that reusable grocery bags, a common substitute for plastic bags, contained potentially harmful bacteria:

“In an effort to reduce litter and protect marine animals, jurisdictions across the globe are considering banning plastic grocery bags. In the US, California leads the way. San Francisco enacted a county-wide ban covering large grocery stores and drug stores in 2007. It extended this ban to all retail establishments in early 2012. Los Angeles followed suit in 2012, as did a number of smaller cities throughout the state. Some municipalities have imposed taxes on the bags rather than implement direct bans.

These bans are designed to induce individuals to use reusable grocery bags, in the hope that a reduction in the use of plastic bags will lead to less litter. Recent studies, however, suggest that reusable grocery bags harbor harmful bacteria, the most important of which is E.coli. If individuals fail to clean their reusable bags, these bacteria may lead to contamination of the food transported in the bags. Such contamination has the potential to lead to health problems and even death.

We examine the pattern of emergency room admissions related to bacterial intestinal infections, especially those related to E. coli around the implementation of the San Francisco County ban in October 2007. We find that ER admissions increase by at least one fourth relative to other California counties. Subsequent bans in other California municipalities resulted in similar increases. An examination of deaths related to intestinal infections shows a comparable increase.” 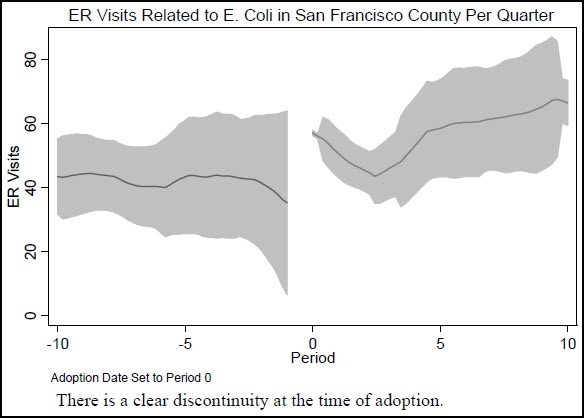 “Using standard estimates of the statistical value of life, we show that the health costs associated with the San Francisco ban swamp any budgetary savings from reduced litter. This assessment is unlikely to be reversed even if fairly liberal estimates of the other environmental benefits are included.”

Don’t wait too long for action. The secret workings of the Australian Crime Commission are outside my experience but I expect there was more to yesterday’s dramatic disclosures about drugs in sport than a desire to dominate the media headlines. I could understand, for example, that scaring the daylights out of those involved in the practices the Commission outlined might be a good way of obtaining a few confessions from people nervous enough to be looking to bargain their way to softer treatment.

Where the danger comes for the ACC and its political master the Labor Government is allowing what the public thinks is too long an interval between the talk and the action. The normal suspects from talk station 2GB were into conspiracy theory mode (it’s all a Labor Party diversionary tactic) virtually within minutes and Kevin Rudd, an astute reader of public opinion danger signs, chimed in this morning with the view that “the key thing now is to establish the facts – which players, which clubs.”

Among the forward searchers. Australians are among the world’s future oriented countries and that’s a good indicator of high gross domestic product per person according to researchers studying the way people use Google. The Future Orientation Index is developed by looking at the number of Google searches people in 45 countries conducted in a given year for both the preceding year and the next year to come. The results of the latest study show Germany as the nation most focused on the future, with Japan second, Switzerland third, the UK fourth, France fifth with Australia coming in sixth. At the bottom of the rankings are Pakistan, Vietnam and Kazakhstan. 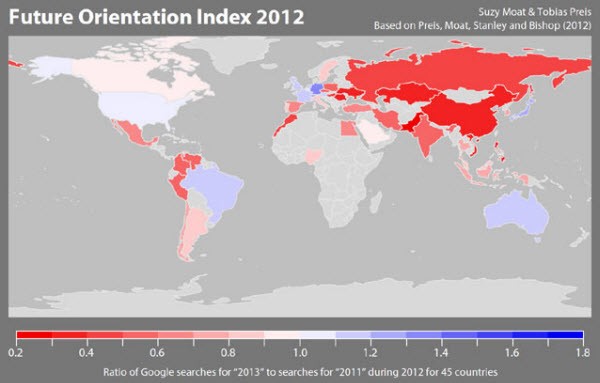 “In general we find a strong tendency for countries in which Google users enquire more about the future to exhibit a larger per capita GDP. There seems to be a relationship with the economic success of a country and the information seeking behavior of its citizens online,” said lead author Prof Tobias Preis of Warwick Business School.

So we have to stuff up the place just because people can’t be bothered keeping things clean?

Re the reusable killing bags. Why don’t you and Bernard Keane just go get a room so we don’t have to read your libertarian love-notes to each other. Preferably not one in a building that has been “socially engineered” with government safety regulations. And your use of the term “social engineers” in place of the insulting “nanny Staters” doesn’t make your piece look less ignorant, just sly.