Following months of negotiation, The Guardian has issued an apology over sensational stories about corruption in the Mexican media. And other media tidbits.

ABC news director Kate Torney made the announcement to ABC employees in Sydney yesterday, telling staff there is “no better place to be if you’re a journalist than the ABC”.

The funding boost – which will also be used to invest in cameras and live broadcasting technology in regional areas – is a significant coup given the annual ABC news budget is approximately $160 million.

Managing director Mark Scott and other executives have been in Canberra this week lobbying for more funding in the next triennial budget round, to be delivered in the May budget… — Matthew Knott (Read more here)

The smartphone killed the magazine? Buried in the latest US magazine circulation audit figures is the next big disruption to the industry there, with Australia sure to follow. While total circulations (print and digital) held up reasonably well in the second half of 2012, sales of single copies via news-stands, supermarkets and other outlets were crunched. These are usually impulse buys, with customers, usually women, starting to read them before buying them at the checkout or at the news-stand.

It seems now, instead of reaching for a magazine to read while waiting, people are using smartphones to check emails, look at news or call someone. And it’s not inconsequential because US analysts reckon it is the main reason why single-copy sales of many US magazines slumped last year. The figures show single-copy sales dropped 9.5% last year. There are around half as many single copies sold as there were in the early 2000s. The slide saw total sales in the six months to December drop 8%, overwhelming a small 0.7% rise in paid subscriptions.

While the smartphone is being blamed for the slide, there was some good news from the digital world for the magazines. The average number of digital magazines sold more than doubled in the six months to December. — Glenn Dyer

Dark days are not over. It was a choice of either black or dark for the nation’s editors trying to describe yesterday’s dramatic events in sport, and its alleged links with drugs and organised crime: 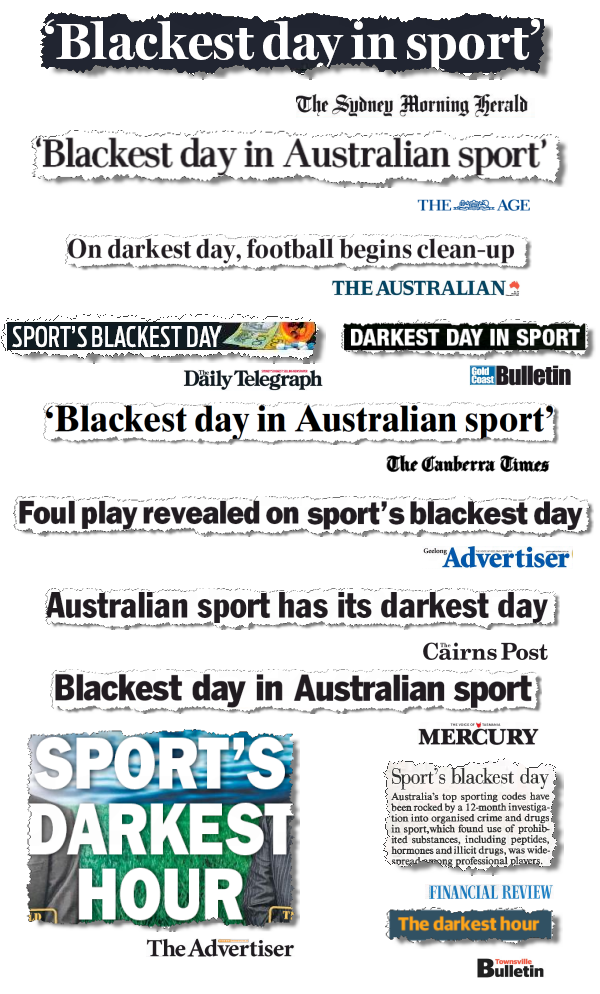 Enjoy responsibly. The lines between editorial and advertising are blurry at best for association mags covering an industry they have a big stake in supporting. And so it is for booze specialty rag Drinks Trade (which claims to be the highest circulating liquor industry publication). They choose to place this ad next to a story lauding Magners as the “Most Advertised Imported Cider” in 2012. Slàinte! 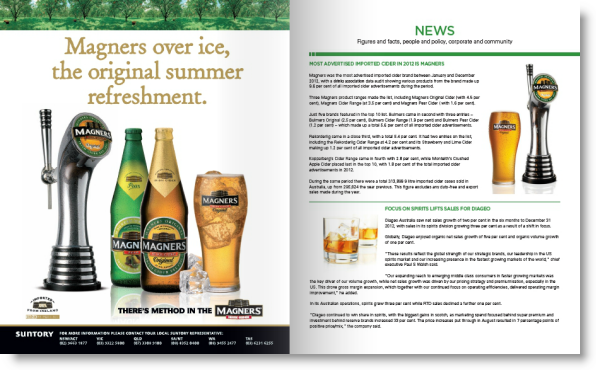 Correction of the day. Last year, in the middle of the Mexican election campaign, The Guardian published a series of sensational reports based on documents purporting to show Mexico’s biggest television network had sold prominent politicians favourable coverage. After a long period of legal wrangling, the paper has issued a statement to “clarify any unintended misunderstanding”.

Front page of the day. Who said the art of subediting was dead? 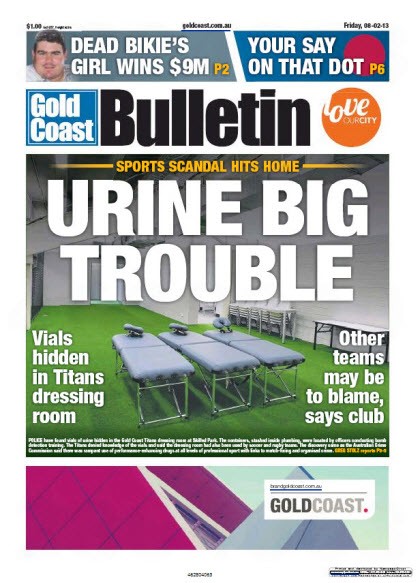 Video of the day. Michelle Grattan signed off today with her final column as The Age’s political editor. In honour of the press gallery stayer we time travel back to a 1983 National Press address by PM-to-be Bob Hawke, who popped up on the sidelines of question time this week. Watch Gratts grill the Silver Bodgie from the 3.30 mark (and Youtube detectives should be able to find a very fresh-faced Heather Ewart, now with 7.30, asking a question): 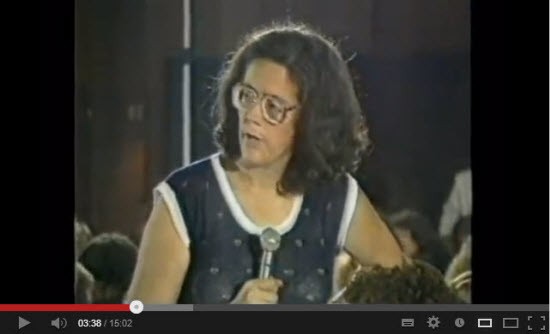 It’s all black when you’ve got your eyes closed.

It’s remarkable how the bleeding obvious prompted so many sensationalist headlines.

Now I’m in high anticipation of their bound-to-be-shocking expose on wrestling.