ABC newsrooms are on alert for a major announcement at 1pm today. What's going down?

‘Important’ address from ABC News boss. ABC News staff are bracing for a “major announcement” from news director Kate Torney today. Staff are being told to gather at 1pm, with the address from Sydney beamed to all ABC offices around the country.

One Aunty insider told Crikey this morning it’s expected to be “good news”. Managing director Mark Scott and other executives have been in Canberra this week lobbying for more funding in the next triennial budget round, to be delivered in the May budget. The memo to staff this morning read:

There will be an important announcement today at 1.00pm (AEST) from ABC Director News Kate Torney.

Kate will be addressing staff in the Sydney newsroom and the announcement will also be fed live to monitors in all other ABC capital city newsrooms to allow staff in other states and territories to hear the remarks. For those staff in regional newsrooms around the country, an audio feed of the announcement will be available in all offices with satellite reception facilities on radio interchange ONE-RIGHT (DC 1R)

All News staff are invited to attend, along with interested staff from across the ABC.

During this session, it is hoped that there will be opportunities to take questions from the floor from interested staff. Those outside Sydney who have questions are encouraged, during the announcement, to email them to the NSW News Editor and Deputy Head of Newsgathering, Don Lange at [email protected], and he will be able to either raise them during the meeting or ensure they get followed up later.

Immediately after this morning’s announcement, there will also be follow-up meetings held locally in each state and territory newsroom as well as in News 24, News Online and the APNC to discuss the announcement.

Addy’s missing readers. Confidential internal News Limited distribution data has revealed The Geelong Advertiser‘s local readership is much smaller than bitter rival The Weekly Review. The Advertiser‘s Corio Bay footprint, obtained by Crikey, shows just 73% of the cruelly dubbed “NoAdvertiser‘s” Monday-Friday readers are residents of the City of Greater Geelong (41,600 readers), and just 69%, or 56,580, of the weekend edition’s readers are G-town residents. According to News, which owns The Advertiser, a substantial minority are drawn from Melbourne and regions to the west of Victoria’s second city. 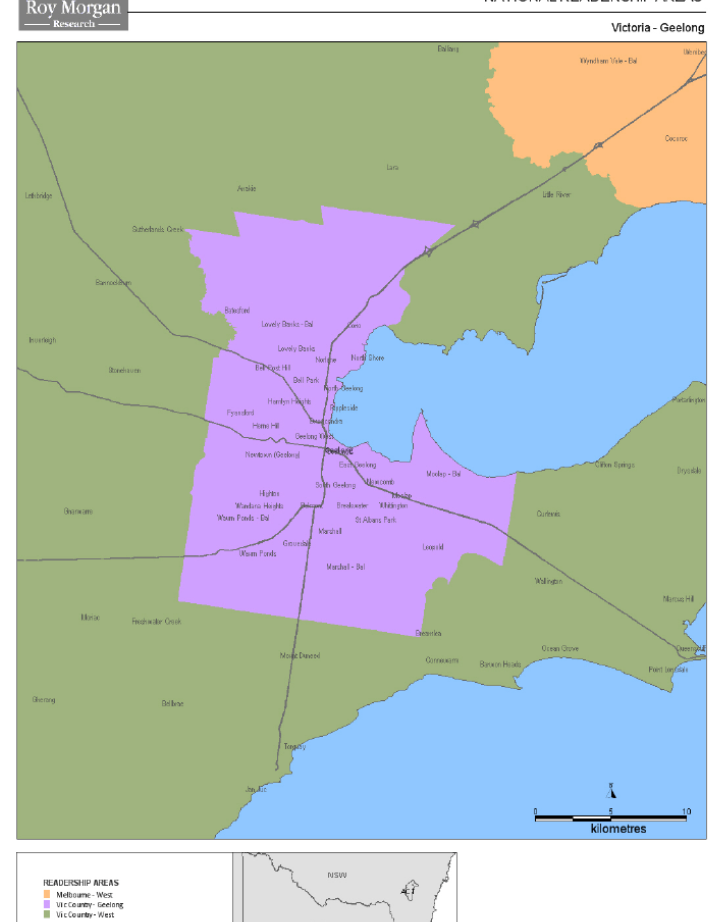 The Geelong edition of the part Fairfax-owned Weekly Review — launched by former Herald & Weekly Times cadet Antony Catalano last year — has been involved in a war for eyeballs and real estate advertisers, many of whom have dumped News for the free publication. The bulging glossy boasts circulation of 75,000 and internal reader surveys suggest TWR is browsed by at least one person in 75% of local households. On a conservative estimate, that puts TWR‘s readership at something like 120,000. — Andrew Crook

What are they smoking at The SMH? It’s still three weeks until The Sydney Morning Herald officially converts to a tabloid — sorry, “compact” — format but signs of a more populist tone are already obvious. The precious “above the fold” real estate on the Herald’s front page is today occupied by an op-ed, written by investigations editor Anne Davies, on the Chrissie Swan smoking scandal (Swan, in case you missed in, has admitted to smoking while pregnant).

It’s a highly unusual move for the Herald, which has traditionally confined such opining to the opinion page. The decision also leaves the latest revelations from the ICAC inquiry into Eddie Obeid languishing on page two.

Front page of the day. It may have been a scoop from the Daily Tele’s Simon Benson, but the NT News couldn’t hide its glee at the Coalition’s leaked policy document investigating a new Top End economic zone. 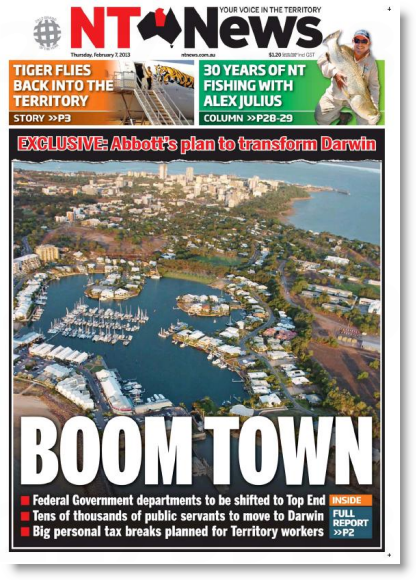