Telstra says it will trial slowing down its users at peak periods to discourage the use of peer-to-peer software. But will it cut piracy or just piss off its customers? 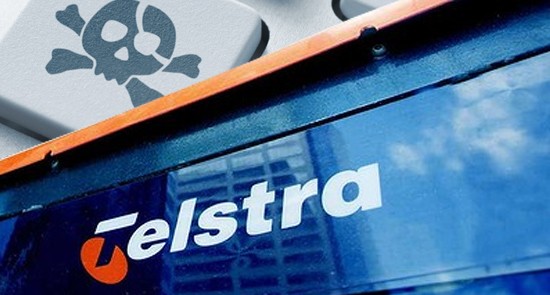 There’s some suspicious sleight-of-hand in Telstra’s explanation of its plan to “trial” the slowing-down of certain kinds of internet traffic at peak periods.

As Fairfax’s Ben Grubb reported yesterday, Telstra will soon conduct a “limited trial of a range of technical options for better managing broadband internet performance for our customers during peak periods”. One of those options is to “shape”, as the industry euphemism puts it, customers’ access to peer-to-peer (P2P) file distribution networks such as BitTorrent.

When it comes to delivering huge data files to a large number of recipients, P2P systems are usually more efficient than just using central servers. The files are broken into many small pieces and, using P2P software, the recipients start downloading random pieces. Then, the recipients automatically trade amongst themselves the pieces they’ve downloaded so far for those they’re still missing. Eventually everyone gets all the pieces without overloading the central servers, and the process even gets more efficient as you add more people.

Now from Telstra’s point of view, slowing down P2P traffic is a good thing.

“ISPs are a bit like electrical networks, in that they need to provision capacity for peak even though peak is only ever used for an hour or two per day or, under adversity, a day or two per year,” network engineer Mark Newton told Crikey. Think of the ABC’s network needs during floods or fires, or on election night.

P2P users represent a big slab of network traffic, pushing that peak up. “In electrical network terms that’s like servicing a bunch of customers who leave their air conditioners on all the time,” Newton said.

By definition, P2P file transfers aren’t real-time traffic. At peak times, quality of service (QoS) rules could give priority to live video streams, voice-over-IP calls and web browsing. All well and good, you might think — until you look at how this sort of thing is achieved.

To see if a packet of internet data is or isn’t P2P traffic, Telstra would have to open it up and look inside. The procedure is called deep packet inspection (DPI) and, as internet freedom campaigner Geordie Guy wrote last night, that’s exactly like Australia Post opening your mail:

“If Telstra or their pals aren’t cool with the contents of what you send, they propose to slow it down or stop it, similar to how Australia Post might put letters which are shady or just gossip onto interstate train services so they can prioritise ridgy-didge business letters from the ATO on the Australian Air Express plane.”

“Implementing DPI makes it completely clear that they aren’t even pretending to be common carriers any more,” he said. “DPI systems provide ISPs with visibility and control over the applications that are traversing their networks. That inevitably changes an ISP’s focus from ‘packet moving’ to ‘application moving’, making them care about the finer details of what each customer is doing far more than they ever had the capability to care previously.

Now for the sleight of hand. In Telstra’s blog post on the subject — “Maximising the Customer Experience — Trialling New Ways of Managing Our Network” — immediately after they say they’re looking at shaping P2P traffic to determine the impact on “time critical experiences for real time entertainment”, comes this paragraph:

“Online piracy is an important policy issue and Telstra remains open to discussions with a range of stakeholders to identify workable solutions that protect the interests and privacy of our customers. However, this trial is solely about examining ways of improving our network management to ensure that all of our customers enjoy the best quality service for their specific needs at the best possible price.”

Hang on. If this is solely about network management, why even mention online piracy? Oh yeah, to reinforce the idea that P2P file distribution is “bad”, when like any technology it’s neutral. Indeed, BitTorrent is used to distribute large software updates and in 2008 Crikey reported how Norway’s national broadcaster NRK used BitTorrent to distribute a full HD TV program to 80,000 people for just US$350 in bandwidth and storage charges.

Telstra certainly has commercial reasons to limit P2P traffic. They can save on capital investment in a copper network that’ll soon be replaced by the NBN, for instance. According to the Fairfax story, in 2011 Telstra executive director Michael Lawrey said he’d rather some other ISP had to deal with P2P data-hogs. As Newton put it: “Why ‘fire’ your worst customers when you can convince them to resign?”

But Telstra has previously shown a willingness to let the copyright industry’s investigators loose on their customers, DPI systems are precisely the tool for that job, and that otherwise-irrelevant mention of online piracy is a powerful tell.

When the Dotcom bubble burst, my (legal) Megauploads vanished

Lol That’s not “suspicious sleight of hand”. It’s plain old simple gouging. Offering a “lesser” service, ie. Slower speeds, for the same money. (Never mind the privacy issues arising from the obligatory packet sniffing as noted.)
A quick glance over at the threads on Whirlpool.net shows the natives are restless and “Not Happy Telstra”. While the company shills are out in force.

Just glad I have the option of not using Telstra.

I might be wrong………isn’t there an argument that P2P users hog capacity and slow down everthing for other users? I’m not saying Telstra doesn’t have other motives.

My supposed 1.5mbps BigPond service crawls along at 200kpbs during peak times. I assume it is due to us sharing bandwidth with neighbours’ torrenting. That said, I support net neutrality and hope the state-owned NBN will be able to resist political pressure from the copyright lobby ala the next US FTA-like treaty negotiation. I assume Abbott would sell us out for a mere Whitehouse photo op.

Blizzard is about to release Starcraft II Heart of the Swarm next month, and I believe that they use Bittorrent to distribute the game and updates. I hope they sue Telstra’s ass off for restraint of trade of one of their biggest releases of the year. Because shaping that traffic during the peak times just after the release is not going to make the Australian gamer community very happy.

And how will Telstra know what I am doing if I am using a VPN?