Julia Gillard named an election date -- then it all went south. Craig Thomson was grabbing the headlines, and Beyonce's Super Bowl performance had everyone talking.

They say timing is everything. And wowsers, what a week. Since announcing a September 14 election, everything — except Prime Minister Gillard’s media mentions — has gone south for the government.

As parliament resumes we’ve got: Craig Thomson facing 149 fraud charges, Nicola Roxon and government Senate leader Chris Evans heading for the hills (couldn’t they have waited until Easter?), Kevin Rudd denying another leadership challenge (if leaving the door so slightly ajar) and Opposition Leader Tony Abbott calling out the government’s backflip on a surplus (kinda funny when you think that about the only decent reason Gillard had for calling it early: to elicit some fiscal detail from Abbott himself).

Fat chance of that. So far we’ve got: mining tax gone, carbon tax gone and the plan to “under promise and over deliver”. It might need a little finessing. He says the ballot will be “a referendum on economic management”. Gillard flags an education “crusade” that will define her time as leader. And so it goes, the pair returning to traditional party platforms, leaving voters to find the balance between big-ticket social spending and fiscal conservatism.

But cripes, talk about an embarrassment of embarrassments — the punters probably don’t care about ministers departing, but Eddie Obeid and Thomson’s tawdry court cases snaring the lion’s share of NSW media coverage between now and the election is likely the final nail in the government’s coffin. The NSW ALP Right strikes again! Someone should write a book: “How one state faction can destroy an entire party.” Obeid boasting about the vast amount of money his family has made may not be helping. 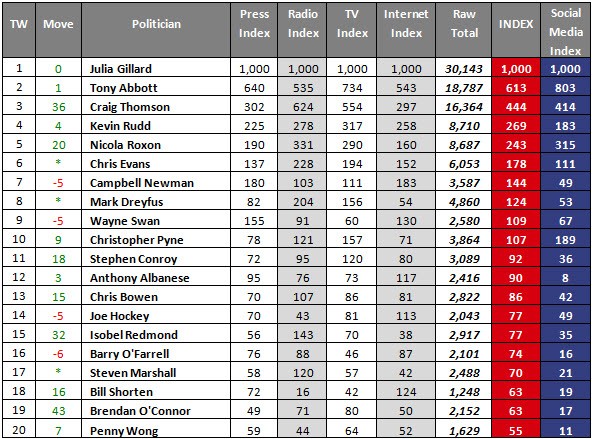 Thomson’s arrest fuelled the bulk of talkback radio discussion, but left room for the ever present chatter of a K-Rudd leadership return.

Gillard and Abbott have always been the main game in social media town.

Long anointed the biggest female music star on the planet (sorry Gaga), Beyonce smashed it out of the park (er, should that be touched down like a fighter jet?) at the Super Bowl.

Abbott at his best on mental health