The baby update. The LNP Member for Bowman Andrew Laming provided his daughter as the prop for today’s contribution from Sydney’s Daily Telegraph: Predicting the future by examining old news. Using a mixture of archived news reports and real-time data, researchers from Microsoft Research and the Technion-Israel Institute of Technology have identified significant increases in the […]

The baby update. The LNP Member for Bowman Andrew Laming provided his daughter as the prop for today’s contribution from Sydney’s Daily Telegraph: 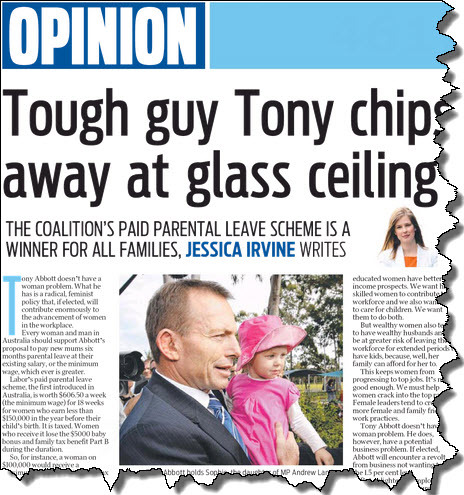 Predicting the future by examining old news. Using a mixture of archived news reports and real-time data, researchers from Microsoft Research and the Technion-Israel Institute of Technology have identified significant increases in the likelihood of disease outbreaks, deaths, and riots in advance of the occurrence of these events in the world. Their findings, Mining the Web to Predict Future Events, have just been published.

In their introduction the technique is described as:

“Mark Twain famously said that “the past does not repeat itself, but it rhymes.” In the spirit of this reflection, we develop and test methods for leveraging large-scale digital histories captured from 22 years of news reports from the New York Times (NYT) archive to make real-time predictions about the likelihoods of future human and natural events of interest. We describe how we can learn to predict the future by generalizing sets of specific transitions in sequences of reported news events, extracted from a news archive spanning the years 1986-2008. In addition to the news corpora, we leverage data from freely available Web resources, including Wikipedia, FreeBase, OpenCyc, and GeoNames, via the LinkedData platform. The goal is to build predictive models that generalize from specific sets of sequences of events to provide likelihoods of future outcomes, based on patterns of evidence observed in near-term newsfeeds. We propose the methods as a means of generating actionable forecasts in advance of the occurrence of target events in the world.”

Some of the practical examples where looking at old NY Times stories led to predictions of future events: 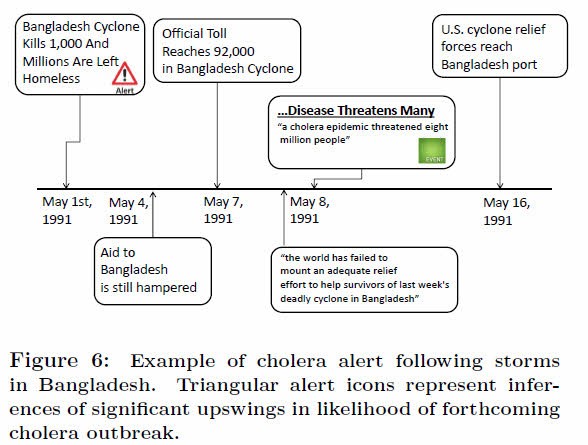 “We believe that the methods highlight directions in building real-time alerting services that predict significant increases in global events of interest. Beyond knowledge that is easily discovered in studies or available from experts, new relationships and context-sensitive probabilities of outcomes can be discovered with such automated analyses. Systems employing the methods would have fast and comprehensive access to news stories, including stories that might seem insignificant but that can provide valuable evidence about the evolution of larger, more important stories.”

The word of a politician. Just something to keep in mind as your listen to politicians proclaiming their innocence. The Guardian had this before and after reminder on its front page after former Liberal Democrat Defence Minister Chris Huhne faced court in the UK this week: 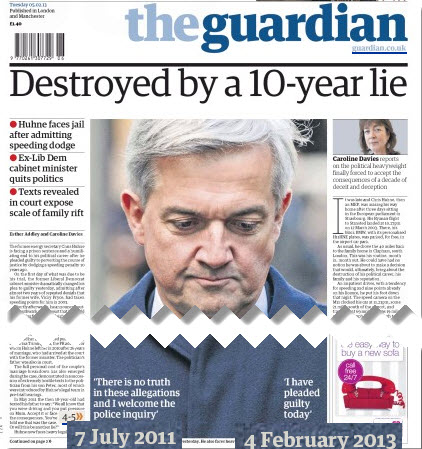 Taking Kevvie’s suggestion. Everyone should take a very long cold shower. That was the advice Kevin Rudd gave the media eager beavers as he left church this week and was asked about the dreaded leadership challenge. Judging by this morning’s coverage his comment does not seem to have had much impact on his questioners. The best I can do to dampen the speculation is record that the market has Prime Minister Julia Gillard looking safe enough.

Football without action. Just a little information for those who sat through this week’s American football Super Bowl. In all those hours of television — even without counting the blackout time-out — there was very little actual football. The Wall Street Journal has done the sums and found that while a regulation NFL game consists of four quarters of 15 minutes each, the average amount of time the ball is in play on the field is about 11 minutes.

It tells us something about Americans that the telecast attracted one of  the largest audiences in the country’s television history. They prefer talk to action but I guess it’s better than watching a nil all draw in soccer. Thank goodness real football is about to resume if they can find enough drug free players.

Re: Predicting the future by examining old news.
Amazing! Now we have a computer program that predicts the bleeding obvious. This combination of the interweb thingy and program boffiny-people is truly powerful….

Nothing makes a politician look more shallow/phoney than the image of them fawning over a baby or small child.

China’s an economic/ industrial / commercial + military powerhouse. Every Aussie returns home from any shopping expedition with ‘Made in China’on probably ninety percent of purchases! When I was kid: 90 percent would’ve been Aussie manufactured. Doesn’t look good folks! China is a major player on the international loans [$’s etc] game. THEY LOAN: Yanks + Aussies BORROW! WAKE UP! our factories, commerce, the driving industrial force of Australia: Sold TO CHINESE/ OTHER non Aussie ‘players’, often employing Chinese labor, closed or gone into receivership. Apprenticeships in important related areas, dwindling. NOT SO IN CHINA! Our land, thanks to Socialist Supremo Hawke + assorted ‘pollie’ ‘sell out’ likewise: being SOLD, not leased to Communist Chinese Govt! Got kids/ grankids? Be scared, be very scared!….

Yeh American football = 60 minutes of football and three hours of “salesmanship” – even with the later replays when they could edit it down?
A lot like 7’s tennis when you think about it? Or the cricket – with their ads for “cooked chook” and hamburgers? Or our sort of football?

As for Rudd’s suggestion? Never get between an op-ed hack and a chance at a beat-off?
[Catch Tony Windsor on 7:30 last night suggesting Thomson might be due some “due process” – to an op-ed like Sales?]