Staffers at Brisbane's Courier-Mail have been told an online paywall is on the way this year. But it might be a different model to the Herald Sun's struggling "freemium" paywall.

News Limited is pressing ahead with plans to introduce paywalls on its tabloid websites, with Brisbane staff told The Courier-Mail is expected to start charging readers for online access in the middle of the year.

News Queensland editorial chief David Fagan told his troops last week a paywall was on the way and suggested it could be a significantly different model to that introduced at Melbourne’s Herald Sun. Although the plans are not finalised, Fagan said the global trend is towards a metered model, which allows readers to access a set number of articles for free per month.

According to Courier-Mail employees at the meeting, Fagan also launched a “big spray” at the Gillard government, saying it has been the worst ever for the media industry.

A News Ltd spokesman denied this to Crikey: “He was emphasising the importance of accurate reporting and journalistic professionalism. He spoke also of various proposals floating round government that would undermine press freedom and the ability of journalists to hold governments to account.”

News Ltd has not made any online subscriber figures public since the Herald Sun hoisted its paywall last April. This has widely been interpreted as a sign the experiment has not been a raging success.

The Herald Sun opted for a “freemium” strategy, rather than a metered model, which means some stories are free and others are available only to subscribers. News Ltd media commentator Mark Day (seen as the company oracle) wrote last September News was reviewing its paywall strategy because of a lukewarm response to the Hun‘s offering. The Australian Financial Review is also ditching its freemium paywall in favour of a New York Times-style metered model this year.

It’s unclear whether other News Ltd titles such as The Daily Telegraph and The Advertiser will also start charging for content this year. News’ spokesman said: “We announced last year that News Ltd would extend its digital subscription to mastheads beyond The Australian and the Herald Sun. We have not announced which mastheads this will cover.”

The Courier-Mail‘s paywall move comes as News unravels its bold experiment with centralised subediting hubs, revealed online by Crikey last week. News Limited is making 65 subediting jobs redundant, including around 30 in Brisbane. IStaff at NewsCentral Queensland are due to find out this week who is being let go.

The backflip, outlined in a staff memo, will see metro papers such as The Daily Telegraph, Herald Sun and Courier-Mail again perform some subediting tasks in-house.  A new role known as “news producer” will be created, combining subediting and digital production tasks. Text subbing for regional newspapers is being outsourced to the AAP-owned Pagemasters. 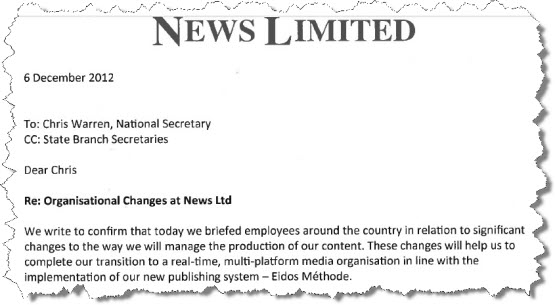 News will launch its new publishing system, Eidos Methode, in a staged rollout mid-year. Managers say the system will reduce the need for as many subs, but there are concerns the company has sliced subs too early ahead of its launch.

Paul Murphy, the head of the Media, Entertainment and Arts Alliance media division, told Crikey: “It is very disappointing to see News Ltd going further down the path of outsourcing. The loss of editorial expertise and experience will be felt heavily.”

The creation of NewsCentral Queensland in 2009 represented a controversial departure from traditional practice. South Australian and Victorian sub hubs followed, before New South Wales centralised operations in early 2011. Under this structure, subediting was organised by state rather than masthead, meaning a sub could edit copy from the Herald Sun one minute and the Geelong Advertiser the next.

At the time staff complained to Crikey of a loss of specialisation and the demise of the traditional mentoring role subs played in the newsroom. But NewsCentral staff were also proud of their work, with sub hubs seen as a better option than outsourcing subbing to external firms.

“It worked very well,” said a former News staffer involved in the creation of NewsCentral. “There were criticisms the quality wasn’t as good; that editors had lost control of their publications. But by and large we were doing things more efficiently.”

“He was emphasising the importance of accurate reporting and journalistic professionalism. ”

I nearly choked on my sandwich. Since when did accurate reporting and journalistic professionalism ever have any role in the Murdoch tabloids.

I’m really looking forward to the AFR ditching it’s paywall.
I won’t even abuse the privilege.
I’ll only read the articles by Laura Tingle….Promise.

It is remarkable that these companies have such little faith in their products. Given the evident sanctity with which they hold to the value of journalism it is somewhat surprising that none of them seem to think that anyone will pay for it.

What’s Fagan/that “spokesman” on – and which planet, as well? He’s only got one eye?
Otherwise, you can’t blame him for not reading his own viewspaper?

Of course it’s the worst government for the media industry :-
they won’t get out of their way and let Limited News run the country and them do whatever they want. And they won’t take advice from a company owned by a foreigner – with it’s/their “idiosynchratic” shares : voting power policy – telling them how to run our democracy.