MacTiernan push for the Senate? ... Where the bloody hell did they spend? ... Russell a Tele fan for his kids.

MacTiernan push for the Senate? Alannah MacTiernan for a Western Australian Labor Senate seat? That’s what one source told us yesterday, and The Australian reported the push today. But others reckon the former state minister, failed House of Reps candidate turned mayor of the City of Vincent in Perth is not the right factional fit. Stay tuned.

Where the bloody hell did they spend? Did Australia’s tourist authority budget for a $3 million advertising spend at the Super Bowl? That’s according to one caller on 3AW’s Rumour File this morning. Apparently a minister feared voter backlash and put the kibosh on the campaign.

Russell a Tele fan for his kids. The Daily Telegraph jacked up its cover price yesterday and distracted readers with a free map for the kids … 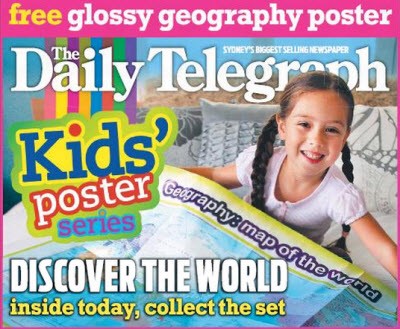 And someone was a big fan …

As one Crikey reader points out, it was former Sunday Telegraph editor Neil Breen who said last year you “have to insulate a prise rise with a promotion or something better in the paper”. They certainly took his advice. A tweet to Crowe’s 769,142 followers helps …

“My sister-in-law returned from France to Australia two days ago, flying Korean Air out of Zurich. During the stopover in Seoul the plane was held due to snow. Passengers were not permitted to disembark (for some reason) until the final departure — 14 hours later! Apparently they were only fed (cold) water and peanuts. Tough luck if you were allergic to peanuts.”