The market is down 31. Dow Jones was down 130. SFE Futures were down 35 this morning. The Dow closed on its lows and registered the biggest intraday fall for 2013 pulling back below 14,000 after breaking through on Friday. Volumes on Wall St were slightly below average. Markets were spooked by political and financial […] 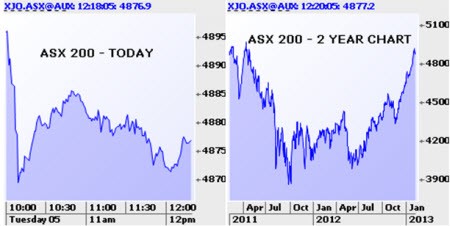 Italy continues to investigate the health of several financials including the world’s oldest bank, Banca Monte dei Paschi di Siena. On Monday five of eight banks listed on the Italian exchange were put in trading halts to halt their sell off. Concerns that Silvio Berlusconi’s Alliance Party is rising in the polls with 28% of the vote raising the odds of him regaining power next year.

In Spain, markets were rattled as Prime Minister Mariano Rajoy and other members of the People’s Party find themselves in the middle of an alleged kickback scandal uncovered by Spain’s largest newspaper, El Pais prompting calls for their resignations.