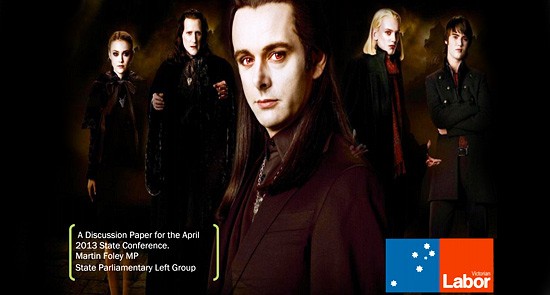 The ALP’s Victorian Left faction has demanded Labor immediately reform itself, while criticising Prime Minister Julia Gillard’s “captain’s pick” of Nova Peris as a slap in the face for party democracy.

In a prequel to expected fireworks at the state party’s April conference, Martin Foley, Albert Park MP and convenor of the dominant State Parliamentary Left Group, takes aim at sclerotic party structures and unaccountable powerbrokers that he likens to vampires from the hit movie saga Twilight.

“The days of factional ‘warlords’ in the Party have given way to the vampires of the undead empire insisting on the Party being a world apart from mere mortals,” Foley writes.

“Like the Twilight Saga own our ‘Volturi’ … enforce their codes of compliance and control — sadly minus the good looks. They falsely promise eternal political life in return for our political soul. The Party’s political lifeblood threatens to be drained away if we allow their whisperings to encircle our hearts and our better judgement.”

“The alternative,” Foley writes, “is for the Party members and supporters of renewal to drive the dagger of democratic organisational change through the Volturi’s heart. We know it has to be done — it’s just a question of when we will take responsibility for our political party.” 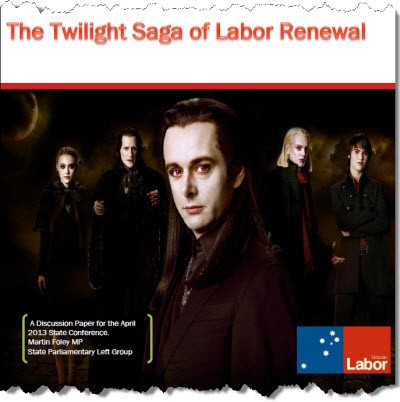 Foley, also shadow parliamentary secretary for the environment, slams the recent parachuting of Peris by the Labor’s National Executive acting on the Prime Minister’s advice, as a counterproductive trick that flies in the face of a sorely needed democratic upsurge:

“The need for one more trick like a ‘Captains Pick’ (which despite the qualities of the ‘star’ runs the risk of a trifecta of disenfranchising party activists, accusations of tokenism and alienating the very community it was meant to be a signal to) are the alternative to serious reform.”

The Socialist Left stalwart presents a four-point plan to save Labor, namely by increasing the participation of existing members and enabling them to draft in friends and sympathisers.

The full document, The Twilight Saga of Labor Party Renewal: 2013 Left Discussion Paper, reiterates many of the modernisation and fundraising proposals floated by Alan Griffin in his 2011 review of the 2010 state election loss, including a dedicated local organisational unit and a further embracing of “Labor supporters” in the community working hand-in-glove with Griffin’s marginal seats strategy.

Direct grassroots participation in preselections, party leadership elections and policy development frameworks are key as is a “serious organisational investment in membership development, local community leadership and campaigning skills”. The new structure must be co-driven by “strong centralised engagement techniques” as well as local fund-raising efforts.

Foley also calls for state conference to be overhauled and re-extended to two days to enable more fulsome debate and discussion, rather than the usual jamming through of omnibus resolutions and urgency motions that most delegates fail to read.

A move to a British-style direct election of the state parliamentary leadership and deputy leadership is also mooted. The internal party positions of state president and state secretary (and the powerful administrative committee) would shift to a more democratic footing founded on the principles of proportional representation. A more powerful state caucus, to enshrine “dynamic tension” between the backbench and the leadership is also slated.

The reforms may serve to bolster the Left’s position within the party. In general, the Labor Right is buttressed by the bloc votes of big unions, while the majority of non-stacked rank and file members typically line-up behind the Left. When the party does embrace direct election — as in the recent case of the national president — the position tends to go to a progressive candidate.

As Labor prepares to fight the federal election on September 14, calls for reform and attacks on vested interests associated with the Right are growing in urgency.

In a swingeing speech to a Young Labor Right dinner on Friday night, Transport Workers Union chief and ALP national vice president Tony Sheldon took aim at the “b-grade wannabes” of his own faction, the NSW Right. Eddie Obeid, currently giving evidence before the Independent Commission Against Corruption, and disgraced former mining minister Ian Macdonald were “cockroaches” thriving “on the corruption and detritus that lies under the dishwasher,” he said.

Meanwhile, the major recommendations of the Bracks-Carr-Faulkner review continue to languish — despite the efforts of national and state-based activists to forge a more democratic path. At the 2011 national conference, just 13 or 42% of the trio’s reforms were fully adopted, with the majority adopted in part or not at all.

Foley’s opposite number, Victorian Labor Unity state parliamentary co-convenor Natalie Hutchins, was contacted for her reaction to the Twilight document, however she declined to comment.

Meanwhile, at national level, there’s talk that Steve Bracks may run in Gellibrand when Roxon goes. The callers and texters on Faine this morning were mixed – some reminding us of Myki (who could forget), the desal plant, and some other Bracks triumphs. Whatever you think of Steve, bringing him back isn’t renewal.

@ puddleduck – I heard on radio this morning that a “spokesperson” for Steve Bracks said that he had no plans to re-enter politics at any level.
Thank goodness for that! What is needed is some young, fresh, progressive individuals who have both sides of their brain intact, and don’t plan to use the Labor party as their own exclusive “get-rich-quick” plan.
Surely there are some out there who actually want to serve the people in their electorates? What your article tells us, Andrew, is that reform of the Labor party should be an urgent undertaking by those currently in it. Otherwise, this once mighty party will just wither and die. No one in their right mind is going to join a political party who denies its’ membership an equal say.

What an utterly contemptible rabble. Who hates who in the ALP zoo?