Richard Farmer’s chunky bits: this Newspoll might be for real

There is one thing that would trouble me greatly about this morning's Newspoll if I was a Labor member with a majority under 7 or 8%: this testing of public views followed the announcement by the Prime Minister of the date for the next election.

Real danger of the yo-yo poll. I can’t bring myself to have any faith in an opinion poll which finds in its last four surveys that Labor’s federal primary vote has gone from 36% in late November, to 32% in the second week of December, up to 38% in mid January and down again to 32% during the weekend just gone. What Newspoll is measuring I don’t know but such volatility is a poor guide as to how people would vote if they actually had to rather than just give an opinion to a pollster.

That being said, there is one thing that would trouble me greatly about this morning’s Newspoll if I was a Labor member with a majority under 7 or 8%: this testing of public views followed the announcement by the Prime Minister of the date for the next election. An announcement like that is far more likely to provoke a considered response than the hypothetical circumstances of normal questioning. The fear should be that this one is for real.

The market seems to think so. The small but gradual improvement by Labor in our Crikey Election Indicator over the first four weeks of this election year has quickly disappeared. The probability of a Coalition election victory is now put at 79.4%. 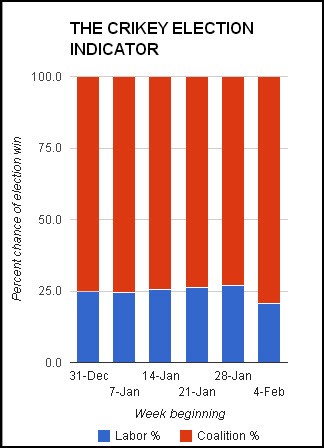 Keep the pictures coming. I know from the comments that my snippets sometimes attract that Crikey readers tend to get angry when they think political coverage turns to non-policy matters but experience running campaigns taught me that the apparently trivial can have more impact on voters than the substantial. Hence the reason that between now and 14 September we will see many more pictures like these from the weekend press: 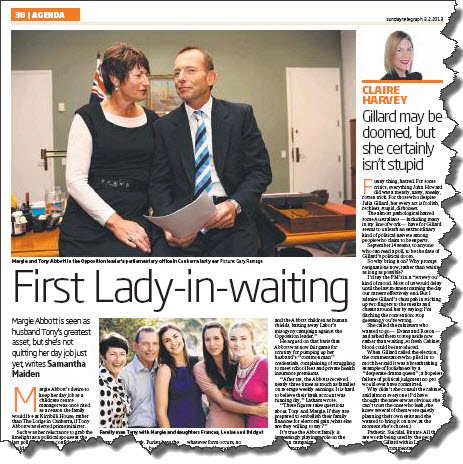 So wonderfully predictable. The inverse relationship I drew attention to when the first Newspoll of the year showed Labor doing better than expected still holds true. The higher the Labor vote the smaller the headline in The Australian. This morning, with the Coalition well in front, the opposite as big replaces small.

Stresses of the politician’s job. An insight into the stresses that political life can put on family life: British Conservative MP Charles Walke told The Sunday Times at the weekend that he estimates 23 out of the 147 new Conservative MPs have suffered marital or long-term relationship break-downs since entering the House of Commons.