The quest for wives for China’s little emperors

China's one child policy has left a nation with far too many men. And yet, writes journalist Kway Teo in Beijing, sons are still more highly cherished than daughters. 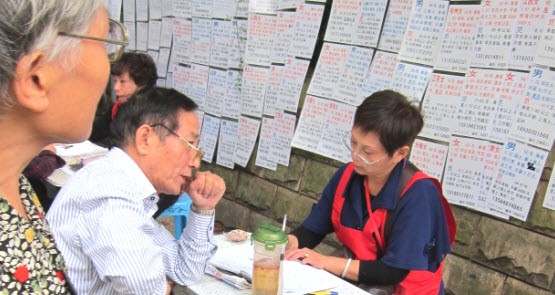 Megan Lee* was in primary school when her mother told her the truth — her father had always wanted a boy.

“The story from my mum was that my dad’s side of the family wasn’t very happy when I was born, because they were hoping for a son. None of my dad’s family showed up at the hospital when I was born; she had to call up her mum and her sister to go and visit her,” she told Crikey.

Lee was born in Beijing in 1980 and at age five moved to Australia with her father following her parents’ divorce three years prior. She thinks part of the reason for the divorce was her father’s hope that another marriage would mean another chance to have a son to carry on the family name.

“I think there was some pressure from his family,” Lee said. She recalls being “sad and disappointed” when she found out, and putting herself through a period when she wanted to be a tomboy.

“I became very competitive. I always thought that if I could do everything just as well as a boy, I could get my father’s attention.” Lee pauses for a moment, then added: “I sometimes think that he would have treated me different if I turned out to be a son.”

China’s one-child restriction took effect in 1979, the year before Lee was born. As the country opened its doors to international trade in the late 1970s, population control was one of the policies aimed at reducing the national level of poverty. The use of ultrasound machines and induced abortions to “improve the quality” of births has been well reported, shorthand for a preference for boys that resulted in a gender gap. There were 120 boys were born for every 100 girls by the year 2000, and the most recent census in 2010 showed no improvement.

Currently, parents who are both only children are officially allowed to have more than one child, but last year a state think tank encouraged the government to implement a two-child policy by 2015 and drop all birth restrictions by 2020. This is partly because China’s national fertility rate — or the average number of children a woman has in her lifetime — is about 1.7, well below the replacement level of 2.1.

“I’d like to have a boy first, and then two girls. But if it’s the other way around I wouldn’t mind either.”

While Crikey spoke to a number of women who are keen on having daughters, three decades of population control have affected the way prospective Chinese parents perceive gender roles.

Irene Low*, 30, has been married for two years. This year, she and her husband have decided to try for a baby. “I want a daughter,” she said. “My husband doesn’t care what we have. But our parents would still prefer a son.”

Her interest in a daughter has also raised eyebrows in her peer group, particularly among friends with male children. “My friends tell me sons are good,” Low said. “They say one day your daughter will meet someone and become part of their family and no longer part of yours. If it’s a boy, during the Spring Festival [Chinese New Year] they will come back to your house and visit you. If it’s a daughter, they go to someone else’s house.”

Women in China are often discussed in language more suited to possessions. Also common is the mentality that once a woman is married, it is her husband’s family’s duty to take care of her.

“Everything’s a transaction in China,” Lee said. “Parents nowadays prefer to have girls over boys because when you have a boy you have a whole lifetime of building up your boy’s future. They’re going to have to start with a big bank account — it’s almost like he needs to ‘buy’ a wife. But if you have a girl, you can easily mould her into someone who can go out and find a guy who will ‘purchase’ her.”

She tells a tale of a colleague with a Chinese passport and Australian permanent residency who refuses to allow her toddlers to give up their Chinese papers, “just in case they marry a future leader — a foreigner will never be able to marry a leader”. The hunt for the correct husband begins early.

The US Pulitzer Center has an excellent podcast discussing the fate of some of China’s abundant bachelors. Their reportage also points out that China’s extremely high savings rates could be the result of families’ pressure to accumulate cash to attract wives for their sons — and that other families not in the same income bracket are raising daughters so they can seek well-to-do husbands.

This means that many women are under enormous pressure to get married before the age of 30. Those that don’t are dubbed sheng nu, literally “leftover women”, despite the reality that they are often well-educated and simply more interested, at that stage in their lives, in having a career than a family.

It’s a sign of a yawning cultural divide between women born after the one-child policy was implemented and their parents, who are keen to trot out one of Confucius’ reliable sayings: “Not having children is the worst form of sin“. It might take a little longer to broach the viability of having a child out of wedlock.

Still, the quest for love continues. Tales of excruciating parent-driven blind dates clog up state-approved social media. Less frequent, but still visible, are the men of various ages standing in subway stations, face half-covered by a bandanna, holding a piece of paper listing key attributes such as their age, height, monthly pay and contact details, in the hope an interested woman might call.

On weekends, hordes of anxious parents descend on Shijingshan Park in Beijing and People’s Park in Shanghai to get some matchmaking underway. They spend hours inspecting the vital statistics of eligible singles listed on thousands of laminated pieces of paper, and loud negotiations take place under the shade of portable umbrellas.

This generation might be slightly more relaxed when it comes to their baby’s gender, but picking a partner is a deadly serious business to some of their parents — never mind if their children might like to stay single for a while longer. However, Megan Lee is moving back to Sydney and her mind is made up.

“I’d like to have a boy first, and then two girls,” she said, grinning. “But if it’s the other way around I wouldn’t mind either.”

*Names have been changed by request

Who and where are the Murdoch heirs?

So Crikey has been ‘managed’ so as to do puff pieces on china now….shame.

Well, that’s one less female the Chinese Kungfu Grannies can swap away, as my lovely wife is more than happy being married to a gui lo. Would be more revealing of what Chinese people thought of their compatriots marrying out of ethnicity.

“Everything’s a transaction in China,” interesting basis for a society, no doubt due to the sheer volume of the population.
Over population will be the death of the environment whether they have 1.7 children or not, look at the pollution problems they are having now.