Presumably Frances Abbott. is being well schooled in these matters but seven and a half months is a long time on the trail and there will be desperation aplenty among a media pack searching for a gaffe or two.

Daughters need handling with care. If a picture is worth a thousand words then Tony Abbott is off to a good start on his “I’m really just a good family sort of bloke” campaign. The presence of his daughter Frances by his side on television screens and newspaper pictures certainly blunts the Labor rhetoric about the Opposition Leader being some kind of woman hater. I mean, how could a fella with a charming daughter like that actually be a misogynist? 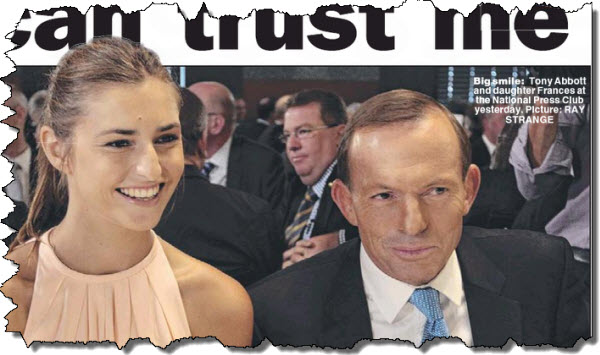 And Frances is apparently not just a pretty face on the campaign either. The Australian’s daily Capital Circle email has reported that Dad has prompted her to have a few words to say as well while touring with the Liberal entourage. “On successive hospital visits in Victoria this week,” the email told us, “Abbott has thrown to Frances before giving health spokesman Peter Dutton a say.”

When that happens a good campaigning idea starts to enter dangerous territory. A few ill-chosen words have the capacity to more than undo the benefit of those wonderful pictures.

Presumably Frances is being well-schooled in these matters but seven and a half months is a long time on the trail and there will be desperation aplenty among a media pack searching for a gaffe or two betwixt now and polling day. My advice is to not try and make too much of a good thing.

Not much modern about Tony. The verbal dividing line is now apparent. This week’s pair of National Press Club speeches shows the contest is between the thoroughly modern Gillard and an Abbott who talks only about infrastructure as being modern. Fourteen Prime Ministerial “moderns” to the Prime Minister (plus a pair of “modernises” — see yesterday’s snippets) to an Opposition Leader’s pair. For Abbott the keyword is “government” with a healthy dash of  “Australia” and “Australians” thrown in. 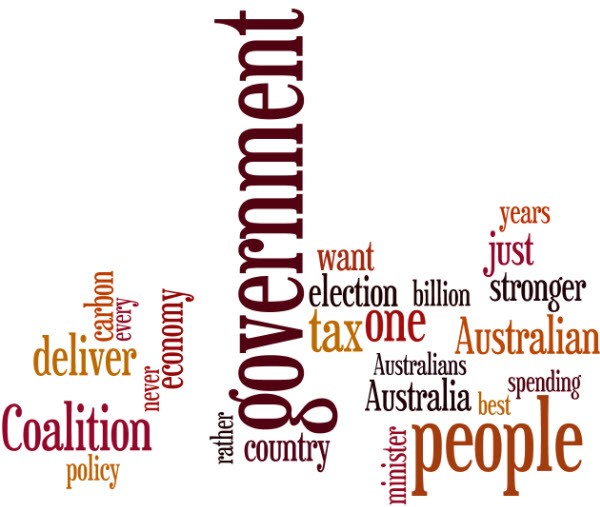 An election date does not safety make. The idea that announcing an election date provides safety in office to Prime Minister Julia Gillard is a nonsense. Seven and a bit months provides plenty of scope for nervous nellies in the Labor Party to turn again to Kevin Rudd.

Why not a rate cut? No evidence at all this morning from the Australian Bureau of Statistics figures on producer prices that there is an immediate likelihood of rising inflation. Through the year to the December quarter 2012, the final demand index rose 1.0%, the intermediate demand index rose 1.7% and the preliminary demand index rose 1.4%. Those figures just confirm the low inflation reality of the last lot of consumer price index numbers.

Hard to understand then, with unemployment rising slightly again, why the bank economists and the market seem to think that interest rates will remain on hold when the Reserve Bank board meets next Tuesday. Yet remaining on hold is what the Crikey Interest Rate Indicator is predicting. 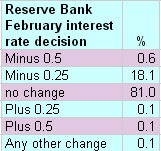 Not surprising that Abbott gets his daughter to speak before his shadow health minister. I’m sure Abbott’s washing machine has more to say on health than Peter Dutton does.

Thank you for the free Liberal advertisement – NOT!

Having said that, I do agree with your comment on one K. Rudd. Just wait until mid-year and the numbers are still predicting a back-bench wipeout. They will be falling over each other to find some way to save their seats, and all the polls suggest that Rudd is the man to do it! I don’t think the early election announcement will save Ms Gillard or her government.

I wonder how she feels about her Dad distilling her worth to an intact hymen ?

@ drsmithy – when fathers make comments like that about their daughters, it gives me the creeps.