How can the Sydney Institute's board turn a blind eye to the embarrassing ineptitude of its ageing executive director? Gerard Henderson deserves a well-earned break, of the permanent variety.

As I opened my Sydney Morning Herald today, it confirmed the worst fears of Henderson Watch.  It is becoming impossible to keep up with the frantic pace of Hendo-Howlers from Gerard Henderson. He’s making errors faster than Kevin Rudd is organising photo opportunities in storm-hit Brisbane. That’s fast. 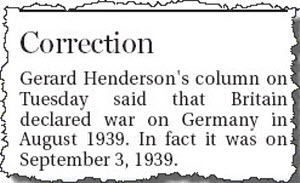 Gerard Henderson’s record-setting efforts deserve international recognition. Ski jumping has Eddie the Eagle. Swimming has Eric the Eel. Now politics has Hendo the Howler, with his incredible five errors in one Media Watch Dog paragraph. Since Machiavelli was a boy, perhaps no one in the recorded history of political commentary has been so incompetent.

Not surprisingly, big questions are being asked in Phillip Street, Sydney. How can the Sydney Institute continue to fund this kind of stupidity? How can the Institute’s board turn a blind eye to the embarrassing ineptitude of its ageing executive director? Henderson deserves a well-earned break, of the permanent variety.

In case study mode, Henderson Watch has analysed Media Watch Dog 164 (November 23, 2012) and 165 (November 30, 2012). Just as Eddie the Eagle jumped feeble distances and Eric the Eel almost drowned, Hendo the Howler has not disappointed his legion of fans.

One of Henderson’s enduring afflictions is corresponditis, whereby he writes scores of letters to people who don’t want to read them and, for the most part, chuck them in the bin. Undeterred by reality, Henderson presses on — an obsessive disorder. This was clear in MWD 165, with his flurry of letters directed at Sky News.

Henderson claimed to be a supporter of the royal commission into child s-xual abuse, never having said “terrible things” about it. He wrote of how he had made “only two public comments on the royal commission”, citing his appearance on the ABC’s Insiders program on November 18 and his “Sydney Morning Herald column on Tuesday 14 November 2012″, in which he claimed to have “supported the Prime Minister’s decision to establish a royal commission”.

Maintaining his horrendous strike rate, there were four errors in Henderson’s epistles. First, November 14, 2012 was a Wednesday (not a Tuesday). As Henderson Watch has long suspected, Gerard doesn’t know what day it is.

Second, in his 800-word Herald article, Henderson wrote not one word in personal support of the Prime Minister’s announcement. His main point was tactical, expressing relief that the royal commission would not focus exclusively on Catholic clergy.

Third, Henderson failed to mention his other “public comment” on the royal commission — a 2200-word tirade in Media Watch Dog 163 (on November 16). Gerard should have known this — after all, he writes the tripe online.

In MWD 163, Henderson (once again) failed to support the Prime Minister’s decision. His sole interest was in criticising Leigh Sales from 7.30. Her sin? Supporting the royal commission and in particular, its investigation into the plague of child s-x abuse in the Roman Catholic Church. In an extraordinary statement, Henderson attacked Sales for exhibiting “no doubt whatsoever about s-xual abuse in the Catholic Church”.

Only a rusted-on apologist for the Church could doubt the evidence pointing to p-edophilia among Catholic priests. But that’s Henderson for you. His first and most enduring loyalty is to Rome. His main role in public life is to defend his hero, George Pell — even though, as Henderson acknowledges, Pell “accompanied Gerald Ridsdale, a priest who was convicted of p-edophilia, to court in Victoria in 1993”. Can you bear it?

On Insiders, Henderson said other terrible things about the royal commission — his fourth error. He labelled it “a distraction”. He said it was being established because of “media pressure” (not the pressing need to eliminate child s-xual abuse in Australia). He also challenged the commission’s legitimacy, claiming “it was done in a big hurry — Bill Shorten was saying on the Friday there was no need for it, which Joe Hockey supported”.  When it comes to matters RC, Gerard is a paid-up member of the Shorten/Hockey faction.

Henderson has said repeatedly he does his own fact-checking for MWD. And so it came to pass in edition 164. Reference was made to a federal Labor MP called “Nicole Roxon”. Perhaps Gerard thinks Australia’s best-known actress is Nicola Kidman.

Henderson claims to know a lot about me, but MWD 164 shows he knows very little. He claimed that “Gough Whitlam first met Mark Latham in 1973 when he presented him with the year 7 History Prize at Hurlstone Agricultural High School”. I first met Gough in 1979 at an ALP function in Werriwa, honouring his service as a former federal member. History was not taught in Year 7 at Hurlstone in 1973.

But the howlers get worse, with MWD claiming “in 1979, Latham joined Gough Whitlam’s office as a research assistant”. In 1979, I was in my first year at Sydney University studying economics. It was not until I had finished my studies in late 1982 that I went to work for Whitlam.

Henderson claimed “the Whitlam family acknowledged that Mark Latham had become like a ‘fifth child’ to Gough and Margaret”. If they acknowledged this, it was never to me. In terms of Gough’s “fifth child”, Henderson has me confused with Andrew Whitlam.

But wait, there’s more. MWD 164 claimed I am no longer writing for the Spectator Australia because its editor “Tommie Switzer was awarded Nancy’s prestigious Five Paws Award for drawing attention — on the ABC RN Sunday Extra program — to the fact that Mr Latham threw the switch to misogyny in 2002 when he described Janet Albrechtsen as a skanky ho”.

Henderson’s juvenile awards had nothing to do with it. There were, in fact, three reasons why I could no longer write for the Speccie:

Step aside Eddie and Eric, a new bumbling fool has entered the pantheon. The total number of Hendo Howlers now stands at 64. Henderson says things, not because they are accurate, but because they suit his agenda for personal vendettas, using the Sydney Institute as a plaything for long-running grudges.

It is said that as people get older, they forget which year it is. And so Gerard Henderson, in his first Media Watch Dog for 2013 (No. 167, January 25), and in undergraduate mode, goes through the clichéd process of handing out awards.  He calls them “Remarkable Media Performances”. Gerard does not do humour well, so you can imagine the tedium involved.

The most memorable award is for the “MOST CONVENIENT MEMORY LOSS”, in which Henderson forgets which year it is. His citation begins by claiming I was “writing in Crikey earlier this year” — about Bachir Mustafa, the taxi driver I apprehended for stealing my property. Surely Hendo means last year (2012), his mind befuddled in a swirling haze of memory loss.

I find it hard to get past the name, The Sydney Institute. It suggests a gloomy gothic 19th century sanitorium where the feeble-minded take shelter and are taken into care to protect themselves and society.

Am I incorrect in ‘remembering’ that the Sydney Institute split from the IPA back in the 80s when the meretricious mendacists of the neocon/white shoe brigade were agitating against HawKeating & the OzCard?
And I remain curious to know who funds those two sheltered workshops for undead zealots of the Chicago Skool,or at least WHY? Can’t be value for money – some sort of tax deduction perhaps?

The anticipation of another dissection of “Hendo” always leaves me trembling. I need to book a session with Dr Phil.