Between handing out gongs and visiting disaster-hit areas, Julia Gillard was the star of the media this week. But her boyfriend tried clumsily to steal some of the spotlight.

Our analysis shows another 13% of Gillard’s coverage came care of partner Tim Mathieson, who bowled up some poor-taste finger spin to the Windies at the Lodge. The PM also used her captain’s pick to anoint Nova Peris for the Senate, at the expense of Trish Crossin, who makes her first and probably last appearance in our charts today.

Queensland Premier Campbell Newman maintained second place thanks to extended radio and television appearances in relation to the floods in his state. Also up north, Bob Katter made news by standing down two of his party’s state Senate candidates (Tess Corbett and Bernard Gaynor) after their comments about homos-xuality.

Much discussion on national identity was spawned by Malcolm Turnbull’s “My Australia” article in The Australian Financial Review; Anthony Albanese left the deep thinking to Malcolm In The Middle, instead ripping into the current Opposition Leader, ramping up his branding of Tony Abbott as negative. Albo also found time to remind everyone that without Bob Brown the Greens will suffer at the ballot box. 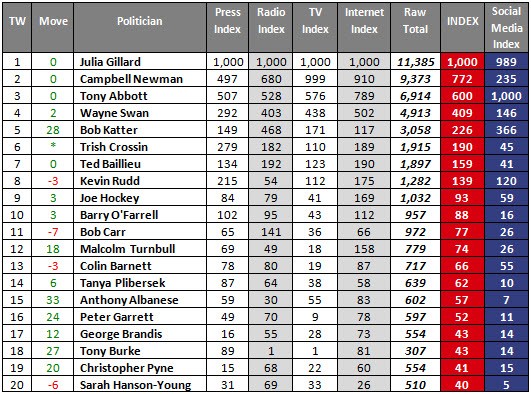 It’s the first time in forever Kevin Rudd hasn’t made our talkback or social media top five. Talkback was fired up about the Peris selection and treatment of Crossin. In WA callers shared views about Premier Colin Barnett and Opposition Leader Mark McGowan as the state election looms.

Katter featured on social media networks after standing down two Australian Party Senate candidates for their comparisons between homos-xuality and p-edophilia.

Publishing queen Ita Buttrose described being crowned Australian of the Year as one of her proudest moments.

No more secrets: Rudd a dud on health reform

Kids quit Aussie politics, but get plenty of lessons in realpolitik

Labor’s frontbench, too, is a mostly private-school affair