News Limited has announced that former Daily Telegraph editor David Penberthy will take over as editor of Adelaide's The Sunday Mail. Plus other media news of the day.

Penbo comes home. News Limited has announced that former Daily Telegraph editor David Penberthy will take over as editor of Adelaide’s The Sunday Mail. Penbo will replace News Ltd veteran Megan Lloyd, who was removed from the post last week and has not been offered another role in the company. Penberthy, who is due to marry SA Labor frontbencher Kate Ellis this year, is well-regarded within News for his strong tabloid instincts. He began his career as a cadet on the Adelaide Advertiser and edited the Tele from 2005 until 2008. As well as penning regular opinion columns, he is currently editor-in-chief of News Ltd sites news.com.au and opinion website The Punch. Musical buffs may remember the Hispanophile from his time singing vocals for Cerveza y Putas (Beer and Wh-res), which billed itself as “Australia’s premier Spanish language Mexican punk band”. — Matthew Knott

Women’s Weekly and the Sextet of Saliciousness. “Never become the story. Nothing bores an audience more than when the author’s ego overshadows the story.” So says Sydney Morning Herald gossip columnist Andrew Hornery in the February edition of The Australian Women’s Weekly that hit newsstands today. Unfortunately for the AWW‘s readers that’s exactly what they get in one of the most insufferable puff pieces ever to grace the magazine’s innards. 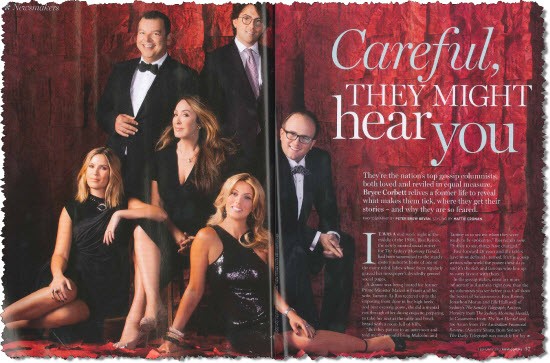 Over eight excruciating high-gloss pages, former Sydney Confidential (or whatever it was called then) columnist Bryce Corbett gives the lowdown on what it’s like being a member of the “Sextet of Salaciousness” — Ros Reines, Jonathon “J.Mo” Moran and Elle “Elle” Halliwell from The Sunday Telegraph, Andrew Hornery from The Sydney Morning Herald, Jo Casamento from The Sun-Herald and Joe Aston from The Australian Financial Review— apparently Australia’s most influential gossip columnists.  The Daily Telegraph‘s Annette Sharp was an apology and, shockingly, crack Age hound Suzanne Carbone wasn’t namechecked at all among the Sydney only set (isn’t this a national mag?).

“Their arrival in a room can cause a hush to descend,” writes Corbett, the copy tailored around a photoshoot of our heroes draped in various states of come-hither prostration.

Aston, wearing a “Richard James Suit from Mr Porter, Charvet Shirt, Gucci Tie and Rochette, and Church’s Brogues” correctly names his Paul Howes-Olivia Wirth relationship yarn as his biggest scoop, while Reines, who admits to having “burnt all her bridges”, retails something inconsequential about Nicole Kidman and the Libyans. The notoriously inaccurate Casamento says “accuracy is key” — unlike Reines she doesn’t want to burn her’s, because “Sydney is a small town.”

The behind-the-scenes video, available on the AWW‘s iPad app, is even more excruciating. There J.Mo cites “the adrenaline” of getting a good scoop, while Hornery mutters something about sitting in “on the theatre of life” and Elle reckons knowing all the goss “before everyone else does” makes her “popular”. “Deadlines,” Elle says, “can be a little bit stressful”.

But, sadly, this isn’t the first time the glamorous life of a gossip columnist has been turned into a yarn. Private Media sources recall a 1987 Good Weekend feature on SMH gossip Dorian Wild penned by Suellen O’Grady. It was suggested Wild was giving Fleet Street’s Nigel Dempster a serious run for his money. At the time, the star Aston-style financial columnist, who gave everyone cheeky monikers they didn’t necessarily like, was CBD’s Mark Westfield. — Andrew Crook

Murf out. Widely-respected Age Green Guide editor Andrew “Murf” Murfett is leaving the paper after 11 years. Murfett, who started his career at Fairfax selling car ads for Drive and weaved his way through property, A2, arts, business, The Sunday Age and EG before settling in behind the Green Guide desk, took advantage of Fairfax’s redundancy round, which is still playing out.

He was originally set to leave last November — however management convinced him to stay on over summer. A replacement Green Guide editor is yet to be announced with the Melbourne section and its Sydney equivalent currently overseen by national TV editor Scott Ellis after Guide editor Greg Hassall’s exit last year.

Murfett is heading to Florida next month with his American wife and will finish up at Media House next week. His departure adds to the hulking list of 280 scribes, editors and photographers who upped-sticks from Fairfax metro mastheads and The Australian Financial Review following the record cull to rein in costs.

Hez on holiday. As the holiday season peters out, Herald Sun readers are still reeling from a severe shortage of the little paper in coastal retreats around Melbourne. Newsagents tell of a farcical predicament where demands for increased Huns were ignored for weeks while the Herald & Weekly Times’ Southbank HQ slumbered.

In one instance a seaside agent jacked up his daily order from 1,000 to 2,000. However, because HQ was on holidays, the request wasn’t actioned for weeks. Now, with the hordes heading back up the freeway the agent is stuck with 2,000 copies — even though they requested the amount be returned to normal. Repeated requests for someone like News Victoria regional director Mark Gardy to do something have fallen on deaf ears. — Andrew Crook

Howdy pardner. We’ve been on Daily Tele photoshop watch ever since changes made to Parliament House media guidelines banned the media from digitally altering parliamentary proceedings. Fair enough, no more Peter Slipper the Rat in the Speaker’s chair.

But the ruling hasn’t stopped the Tele from having its fun outside the chamber. Here’s their latest effort morphing Tony Abbott into Clint Eastwood’s cigarillo-smoking Man with No Name. Rocky start. Kudos to the networks for their constantly updating flood coverage, but memo to Channel Seven: you might want to get your maps right. Here’s where Google Maps (and the rest of Australia) thinks Rockhampton and Mackay are located: Front page of the day. The Courier Mail has a striking image of flood victims on the front of its paper today. The journalists' union has met with HuffPost Australia staff, and says they were disrespected by their employer when it shut down its local edition.

Seven has apologised for a poll asking its Facebook users whether commentator Yassmin Abdel-Magied should leave the country.

Cosmopolitan was hit the hardest, but New Idea and Women's Weekly are struggling too.

“Toady smokin’ loco weed”?
Where’d they get the face part – behind the bike shed?

In a remake – “Man with NO scruples”?