Farewell to McClelland, a ministerial cipher for the security state

Robert McClelland's time as attorney-general were lost years representing how Labor has been co-opted by the security establishment. Farewell. 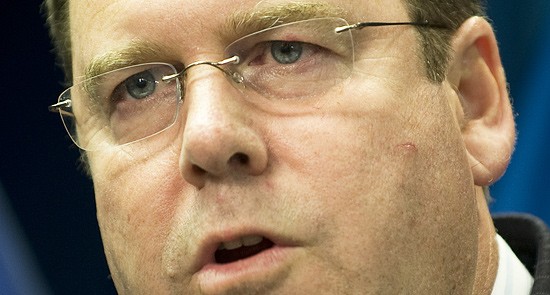 His father was a close contemporary of Lionel Murphy; the pair served in the Senate until Murphy’s appointment to the High Court. The 40th anniversary of then-attorney-general Murphy’s “visit” to ASIO in March 1973 is just a few weeks away. The timing is not entirely without significance.

Whereas Murphy regarded ASIO with ill-disguised, and well-justified, suspicion, and acted upon it, as attorney-general Robert McClelland enthusiastically extended the agency’s powers.

ASIO itself, of course, has changed significantly for the better since Murphy’s time and the Hope Royal Commission.

But more than ASIO has changed. Between Murphy’s raids on ASIO in search of information about Croatian terrorism he believed the agency was hiding from him, and Robert McClelland expanding ASIO’s powers via the “WikiLeaks amendment“, something has changed in Labor’s relationship with the national security apparatus of the country.

McClelland not merely expanded ASIO’s powers to monitor Australians overseas and paved the way for the notorious cybercrime bill (in the course of which he rejected calls from his own Senate colleagues to improve the bill), he proved a worthwhile representative of the interests of the security state. He suggested WikiLeaks was engaged in “criminal” acts before one of his own agencies, the Australian Federal Police, had to contradict him; despite that, his statement has since been relied on by the financial intermediaries blockading WikiLeaks, Visa and Mastercard, to justify their blockade. He threatened to cancel Julian Assange’s passport, and even called for media censorship arrangements on national security information.

This wasn’t merely McClelland’s natural conservative temperament — he complained when the ACT government “threatened” to allow same-s-x civil unions to be held in (shock, horror) public. Rather, it represented the full co-option of a political party once seen as the enemy by the national security bureaucracy.

Not merely did Labor decline to roll back the excesses of the national security and counter-terrorism legislation of the Howard years, it sought to exacerbate them at the prompting of the Attorney-General’s Department and its law enforcement and intelligence agencies.

McClelland’s successor, Nicola Roxon, has shown a similar compliance with the demand for ever-greater powers of surveillance, information-gathering and enforcement, but with the signal difference of her willingness to expose the process to some sunlight via a parliamentary inquiry into the most recent wishlist of agency and departmental national security proposals.

The result has been the further exposure of the reluctance of the Attorney-General’s Department to face or cope with any sort of rigorous scrutiny, which has in turn placed its minister under unnecessary and at times embarrassing pressure.

The performance of AGD in that process has been something the Howard government simply wouldn’t have tolerated from its bureaucrats. McClelland’s time as attorney-general were lost years from that perspective, a period which a department uncomfortable with scrutiny and public debate of its demands was allowed by a ministerial cipher to have its way, to the detriment of basic rights.

Agree with this article. A massive underperformer who perhaps, dare I say, would have been better off in the Liberal party. Difficult not to see him as a classic case of nepotism gone wrong. No great loss at all.

It is galling to watch the security services get ever increasing resources and legislative backing with such little oversight. As with all bureaucracies, accountability tends to be lost as the budget is increased and the powers extended.

More galling that a Labor govt hasn’t seen fit to scrutinise them more closely. I for one would be happy to see budget savings directed to the overall security overlords.

Spot on Bernard. He will not be missed.

aka (by his colleagues!) Mr Potatohead. Good riddance.