Richard Farmer’s chunky bits: a partner to be seen not heard

It might go down well in a men's shed but Tim Mathieson should be kept silent in front of television cameras or surely he will fall victim to Nicola Roxon and her thought police.

It started with a kiss. The Prime Minister got hers from a new Australian. And from his wife for the Opposition Leader. 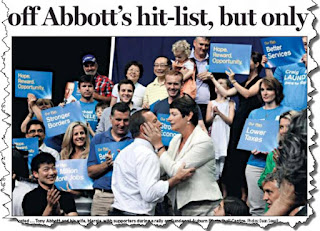 Australia Day and the campaigning really began. The babies would surely follow as an election year got off and smooching. And sure enough this morning: 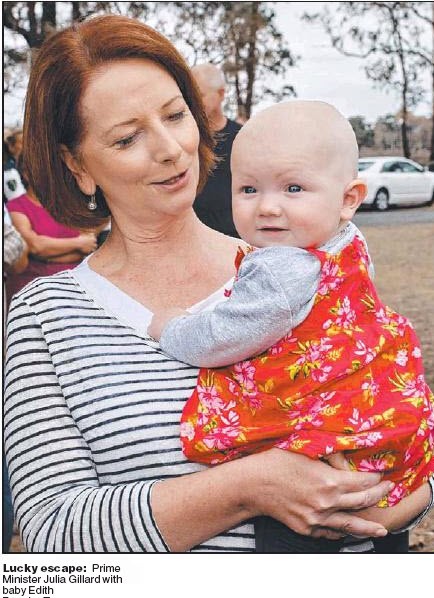 My fearless prediction is that Tony the SNAG will not be far behind.

And the market is still saying the Opposition Leader is more likely than Julia Gillard to be doing the kissing when election day comes to a close.

The gradual but small improvement shown in those Monday Indicator readings went in to reverse this morning as the punters tried to factor in the importance of that new Australian Financial Review opinion poll of marginal seats. We will see.

A partner to be seen not heard. It might go down well in a men’s shed but the first bloke should be kept silent in front of television cameras or surely he will fall victim to Nicola Roxon and her thought police.

”We can get a blood test for it, but the digital examination is the only true way to get a correct reading on your prostate, so make sure you go and do that, and perhaps look for a small female Asian doctor is probably the best way.”

And shadow Attorney General George Brandis with a comment, mildly admonishing Tim Mathieson for a ”slightly unfortunate racial reference”, either showing he has a sense of humour or speaking out against the advocated examination technique:

”I don’t think we want to have in this country a culture of finger wagging.”

Abolishing nothing a virtue. I do admire the way that Shadow Treasurer Joe Hockey and his leader Tony Abbott could find contradictory thing to say about the mining tax. For the financial man it was admiration that “only Wayne Swan could invent a tax that doesn’t raise any money and brings down two prime ministers’.’ Indeed. But only Tony Abbott would try and convince us at a policy launch that the abolition of a zero tax would somehow help stimulate economic growth. 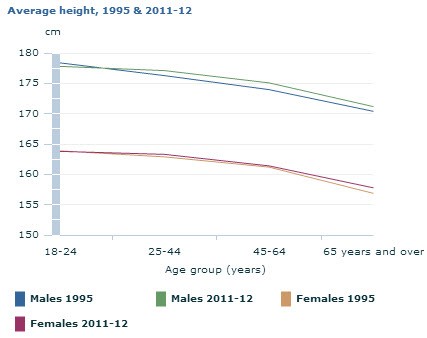 The merroir of a Coffin Bay oyster. Note the news below and then discuss while comparing with a Sydney rock from the Hawkesbury.

Oysters Rebound In Popularity With Man-Made Bounty — “Consumers discuss the ‘merroir’ of different oysters, the water conditions that determine an oyster’s flavor. Like wine connoisseurs, oyster enthusiasts talk about an oyster’s mild finish, hints of copper, pleasant melon flavor. What happened to ‘briny’?”

A quote for the day. And something worth keeping in mind until our election is finally over.

“I’m not generally one of those people who believe that a political speech is an actual event in the world: it’s only somebody talking, after all. A political leader can say pretty much anything, and however moving or courageous it sounds, the saying of it does not change the furniture of the universe. As W H Auden wrote, ‘poetry makes nothing happen’.”
– Janet Daley, London’s Sunday Telegraph

There’s a difference between “try to” and “convince” us? It’s not as though he has?

Re Tim Mathieson: Two things – first he would appear to be stating the bleeding obvious when he says that female Asian doctors are tiny and very female, with small hands!
And two, Tim has done a magnificent job of highlighting the need for men to have regular “digital” examinations of their prostate glands. After all, the whole blo+dy country is talking about it!!!
I am female, and what he had to say didn’t upset me, and I doubt it bothered too many Asian female doctors either.